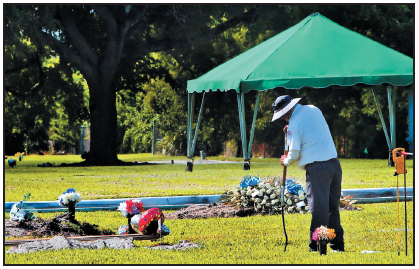 The hearses and cars kept coming.
Under a cloudy October sky, they crawled in groups through the gates of Delray Beach Memorial Gardens Municipal Cemetery about every half hour on a recent Saturday.
As one burial service ended, the next group arrived, a constant coming and going of grief that seemed to have, much like the pandemic responsible for most of it, no end in sight.
“Before the pandemic we averaged three or four a week. Now we’re doing 10 a week,’’ said cemetery crew leader John “Clay” Pape (pronounced like poppy). “For a cemetery of this size, it keeps us really busy. I lose track of time, to be honest with you.’’
Ever since COVID-19 started killing people in Palm Beach County in March 2020, cemeteries and funeral homes have struggled to keep pace.
Among the busiest is Delray Beach Memorial Gardens, where the number of burials has jumped nearly 60% the past 18 months or so, an increase Parks Director Sam Metott attributes to the pandemic. Curtis Wise, a city worker at Delray Beach Memorial Gardens, watches after assisting a mourner over a high curb prior to a burial.

The somber task of handling that surge has fallen to a handful of dedicated workers in the city’s parks department: cemetery manager Yasemin Kacar, Pape, Curtis Wise and Chad Sweatte. (Another cemetery worker, Daniel Stubbs, helped, too, before he recently left the city.)
They often work seven days a week in a scramble to keep pace with a continuing cycle of duties at the nearly 40-acre cemetery between Interstate 95 and U.S. 1, south of Atlantic Avenue and north of Linton Boulevard.
They poke metal probes into the earth in search of new burial plots. They dig graves with backhoes and shovels. They set up tents and chairs for grieving families. They lay fresh sod across the dirt over the newly buried.
They erect gravestones, too, but not as promptly as they’d prefer. Manufacturers are so busy, there’s a six-month delay, Pape said.
“It’s to the point where a couple of weeks ago the suppliers of the concrete vaults said there’s a shortage,’’ he said, explaining how vaults go into the ground first, then the coffins go into the vaults, which are topped by lids and dirt. “They’re rushing the vaults out now.’’
The pace ebbs and flows. Nine one day this summer. Just one the other day. Twin brothers killed by COVID-19 were among the six buried on that October Saturday when cloudy skies threatened rain.
“It was going crazy since the beginning of COVID, then once people started getting vaccinated, it went down for about three or four months,’’ Kacar said.
“I was like, ‘Oh, thank God, these vaccines are working.’ Then once it mutated and it became delta, it went right back up to where we are.’’
Through Oct. 19, the number of burials this year was 208, on a pace that will be close to the 247 burials in 2020. There were 179 in 2019.
If not for the break earlier this year, “we would have been well at last year’s numbers by now,’’ Kacar said on Oct. 19.
In other South County city cemeteries, the pace of burial hasn’t been as busy as Delray’s.
Boynton Beach had 168 burials each in 2019 and 2020 and 127 through Oct. 15 of this year. Boca Raton had 68 in 2019, 91 in 2020 and 68 through Sept. 28.
“They told me in Fort Lauderdale they have a three-week waiting list to get buried. That’s how backed up they are,’’ Pape said.
The sizes of the cemeteries and the availability of burial plots in public and private cemeteries might help explain the different burial trends.
“If folks don’t already have a plot or they don’t want to do a mausoleum, we don’t have an in-ground box for them to buy at the moment,’’ said Boynton Beach City Clerk Crystal Gibson.
Funeral homes in the area have been overwhelmed, too, Kacar said.
“I spoke to one funeral home (director) and he was telling me he was thinking about getting a refrigerated truck in the back of his premises because he doesn’t have enough room to store the bodies,’’ Kacar said. 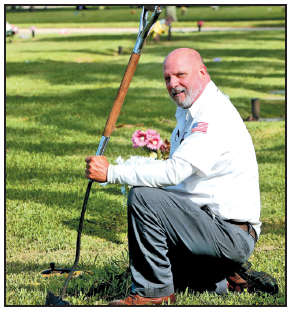 At Delray Memorial Gardens, the man responsible for digging most of those graves is Curtis Wise, a 29-year veteran at the cemetery. He said the pace has been so busy that the city had to replace a backhoe that kept breaking down.
Among the buried are his friends and relatives.
When Wise found out the coffins of two aunts who’d died of COVID-19 were scheduled for interment at Delray Beach Memorial Gardens, he couldn’t bring himself to dig their graves. Pape did it for him.
“It bothers me,’’ said Wise, who unwinds after work by putting on headphones and listening to motivational speeches by the pastor Eric Thomas. “But I’ve been here for so long it’s like I’m numb to it.’’
As busy as the pandemic has kept the crew and the other city workers who pitch in to help, it has brought out their best.
Though exhausted from the work’s physical demands, they still make time to show compassion and dignity to the grieving.
“They’re the unsung heroes,’’ said Amy Hanson, assistant parks and recreation director. “They do all the hard work and they do it quietly and with dignity.’’
On the Saturday morning with six funerals, Wise helped push a mourner’s wheelchair across the grass and guided an elderly woman with a walker over a curb and into the shade of a graveside tent.
It is often up to Wise and Pape to gently remind relatives to limit the number of mourners to 10, keeping with CDC guidelines. This is something most grieving families don’t want to hear.
And on busy days, they’ve had to delicately referee the funeral processions, asking anxious families for patience while other families linger in their struggle to say final goodbyes. 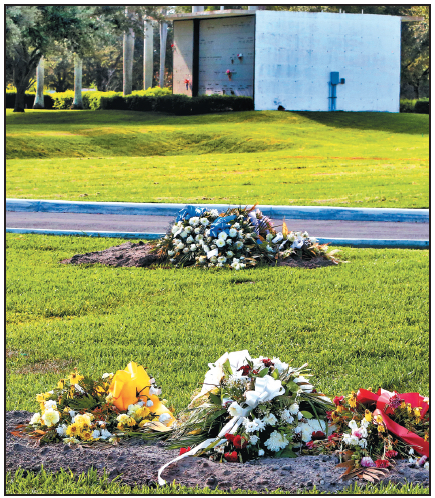 “Sometimes it can get overwhelming. It can wear on you,’’ Pape said. “You don’t know them, but you know what they’re going through.’’
The crew also directs traffic, which can be tricky when stretch limos require several back-and-forth maneuvers to negotiate hairpin curves along the cemetery roads.
“It definitely is going above and beyond,’’ Mayor Shelly Petrolia said, praising the crew.
On top of all of that, the workers have tried to keep up with ongoing maintenance, removing damaged fencing and installing fresh landscaping. Lately, the back fence has been lined with steel cofferdams, which prevent sugar sand from rushing back in on the workers as they dig graves.
“We’re very proud of this team,’’ Metott said at a City Commission meeting on Sept. 13 when the cemetery crew was recognized for its work during the pandemic.
“This team has stepped up,’’ he said. “They’ve worked long hours without days off and with a lot of extras that go into a situation we all have been challenged with. This team was the front line for that.’’
Wise didn’t set out to be a cemetery worker when he joined the city’s parks department. On his first day of work, he was asked to help out at the cemetery, which was shorthanded at the time.
He said he liked the seclusion and serenity that came with the job and asked to stay.
“There really ain’t nothing to like about burying people, but it is peaceful here a lot of the time,’’ said Wise, who shares a home with his sister, a nurse at Delray Medical Center.
On a short break in October, he gestured toward the bright yellow backhoe on which he spends much of his time.
“That’s a new one,’’ he said. “I had a smaller one when the pandemic started. But with the amount of work that we were doing, it kept busting. Some problem with the hydraulics.’’
Just before going back to work, he looked down at the brown soil of a fresh burial topped with a scattering of cheerful flowers.
“We’re so busy, I can’t put grass on the graves. I don’t like that,’’ he said.
But with so many more funeral processions expected to crawl through the cemetery’s gates in the coming days, the sod would have to wait.
“Now we’ve got to get started digging again.’’