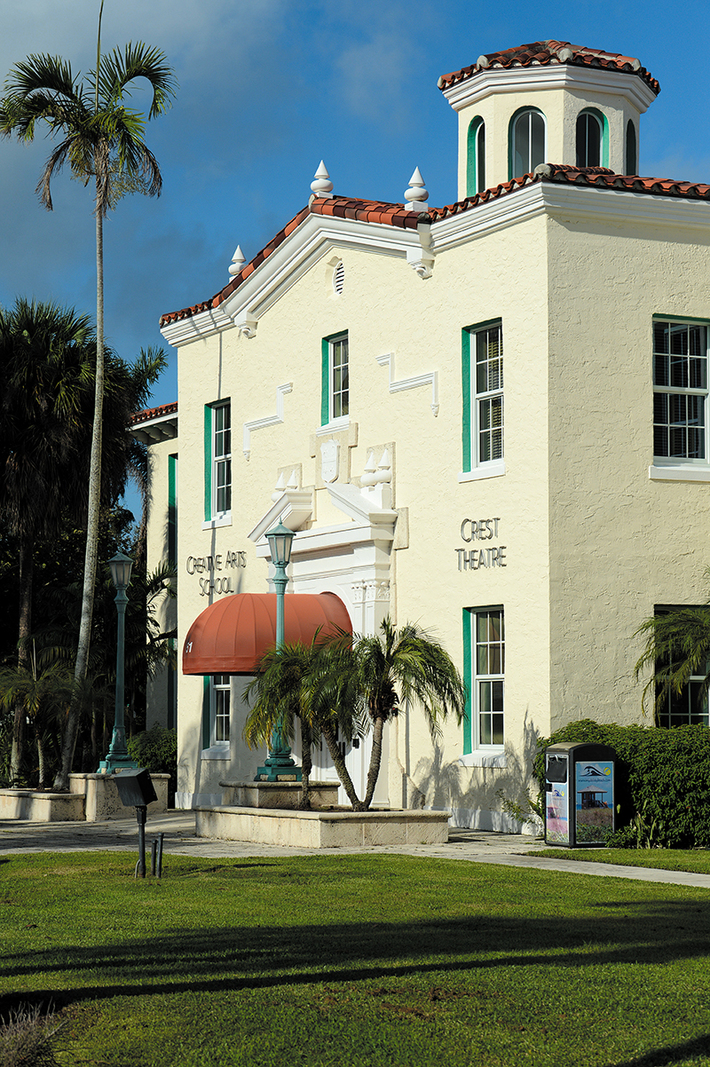 With renovations halted at the Crest Theatre, a private donor asked to have her unused contributions returned. Jerry Lower/The Coastal Star

Delray Beach has cited many examples in which it says Old School Square Center for the Arts has not complied with terms of its lease. Inadequate reporting of its efforts to diversify its board and its programs is one example. But at the crux of most issues: money.
The nonprofit is filing federal income tax documents late for the second year in a row. On its most recent tax form, for the fiscal year ended Sept. 30, 2019, it reported net income of $746,283.
That’s in stark contrast, however, to its perennial money-losing past. Tax returns for the eight previous years show net losses every year, totaling nearly $3.3 million.
Meanwhile, 10 of 24 board members have resigned this year, with the group’s former chairwoman citing several financial problems.
The organization’s supporters concede there are problems, but argue that terminating the lease is overkill.
Among them is Frances Bourque, Old School Square’s founder and chairwoman emeritus.
“Mea culpa, mea culpa for anything we did,” she told city commissioners in July. “It wasn’t due to malice, but ignorance. We need to move on.”
The nonprofit hired a law firm that has threatened to sue. The city can terminate the lease without cause, as long as it gives 180 days’ notice.
In July, the City Commission instructed its internal auditor Julia Davidyan to conduct an audit of Old School Square. Among her findings:
• The nonprofit may have inadvertently “double dipped” by using a federal Paycheck Protection Program loan to pay for the same payroll expenses already covered by Community Redevelopment Agency money.
• A $900,000 donation from philanthropist Margaret Blume earmarked for renovation of the Crest Theatre was listed on some financial filings, but not others.
• Recent budget reports and files appear to present incomplete or inaccurate payroll data.
• Annual budget documents submitted do not comply with what is required by the lease. Budget and quarterly reports, for example, do not account for the renovation of the Crest Theatre.
“There are two things going on here. They’re either remarkably sloppy and have been for years and years, or there’s a [bigger] problem,” said Commissioner Juli Casale, one of three on the City Commission who voted to end the lease.
“No one’s explaining why they’ve made no effort to fix it. Instead of rectifying their issues, they’re attacking the commission.”
Old School Square’s supporters insist they did cooperate with the audit and weren’t given a chance to correct mistakes.
The nonprofit’s chief operating officer, Holland Ryan, and chief financial officer, Latoya Lawrence, did not respond to requests for comment.
Most Old School Square board members who have resigned this year declined to comment publicly, if at all. Former Chairwoman Joy Howell wrote a six-page letter to fellow board members in April when she resigned, listing what she saw as financial problems that needed fixing.
“Any attempts at oversight and my fiduciary duties have been met with continued resistance by the executive committee and sometimes by staff,” she said in the letter.
Howell went on to say that the full board needed more information about the organization’s financial problems and cash flow concerns.
She questioned, among other things, why the nonprofit was paying an outside accounting firm $20,000 to $25,000 to correct its books in recent years. And she recommended the hiring of a promoter to negotiate musician contracts more favorable to Old School Square.

Nonprofit gets city, CRA support
Old School Square can derive up to 25% of its budget from the Community Redevelopment Agency. It has received $9.5 million from the CRA over the past 18 years, records show.
The nonprofit pays $1 a year to rent the property, which consists of three historic buildings and a pavilion.
The lease stipulates that Old School Square is responsible for paying the costs of utilities, pest control, janitorial service, and expenses incurred making improvements to the interior of the buildings.
The city’s obligations include maintenance and repairs to roofs, foundations, walkways, elevators and landscaping.
The city’s “limited-scope audit” focused on whether Old School Square was in compliance with terms of its lease and doesn’t address other matters that could arise from a forensic audit of its finances. Commissioner Shirley Johnson has said she supports one.
For example, executive compensation of $339,036 paid in fiscal 2016 was nearly 41% higher than the $241,007 paid in the second-highest year, which was 2015.
Some of that increase may have been due to a severance payout to former CEO Joe Gillie. He retired in 2015 after 23 years at Old School Square — first as executive director, then as president and CEO.
He was provided no retirement plan during his tenure, Gillie said. Upon his leaving, the board opted to take two years of his annual salary and amortize it over four years. He received $219,267 in all, Gillie said. An outside auditor put the amount higher at $236,040.
“This was their way of giving me a retirement plan that was not overly taxing to the organization itself. They said that I deserved more,” Gillie said.
Mayor Shelly Petrolia, who voted to terminate the lease, said the payout was yet another example of the Old School Square board’s fiscal irregularities.
“Especially since that was around the time they were coming to the CRA and crying they were broke. That was contrary to what they should be doing. It validates the concerns on the commission.”
Since Gillie retired, Old School Square has seen two chief executives come and go. Robert Steele was hired to replace Gillie. He resigned in May 2018. In October 2019, the board hired Shannon Eadon. She resigned in December 2020 in the height of the pandemic.
Neither would comment on the record for this story.
The nonprofit’s tax returns also show substantial fluctuations in profits and losses from one year to another from alcoholic beverage sales — including combined losses exceeding $74,000 for the two most recent years reported.
Annual travel expenses in three recent years ranged from $63,127 to $83,360.
Gillie said those expenses were less when he was CEO, but suggested the cost of flying in entertainers and lecturers for appearances might account for much of that. Tax returns show hundreds of thousands of dollars paid annually for performer fees, but it’s not clear if they include travel.
Old School Square’s tax returns also show several dozen employees. Its website lists 15 staff members.
“They’re jobbers,” Gillie said of the high number. These are part-timers who are paid to work specific shows and do so at various venues in South Florida, he said.

Equipment, donations in jeopardy
The firm conducting the nonprofit’s most recent annual outside audit said in a Sept. 9 letter that it noticed a “significant deficiency” in investments, pledges and other financial categories that “were not reconciled or updated in the current year.”
“An inability to reconcile is code for these firms can’t stand behind the numbers. And that’s a problem,” Casale said.
The auditing firm’s letter said that Old School Square blamed “recent changes in senior management” for the problems, and management said it was able to address them.
If the nonprofit eventually leaves (it can reapply for a new lease if it meets certain conditions), it will take out its equipment. That’s “all the lighting, all the sound — everything that’s in those buildings,” Gillie said. “Somebody that comes in is going to have to raise a million or two just to get some equipment in there to make it run.”
Meanwhile, Blume wants the balance of her unused contributions totaling $1.4 million for renovating the Crest Theatre returned to her since that work has now stopped. She also gave $1 million earlier for work on the Cornell Museum, which was completed.
In a letter she wrote to the City Commission on Aug. 30, Blume said the decision to end the Old School Square lease was “rash and irresponsible. It will take a significant amount of time, effort and funds to get the property minimally operational.”
“I’d say we were about 80% complete” with the theater renovations, Blume said in an interview. She’s not sure yet how much of her $1.4 million gift she wants returned, but said it will be in six figures.
In her letter, Blume said she has given Old School Square so much money in part to help it become more financially solvent.
“They didn’t even have the courtesy to respond to my letter,” she said of the City Commission.
Gillie dismisses concerns about Old School Square’s inability to break even, despite the CRA’s annual infusions of money. “So what? Do you know what it costs to maintain those buildings on an annual basis? Look how much money we’ve raised over the years.
“There should be a return on their investment, and sometimes it’s in the negative, but name an arts organization that isn’t. It’s hard to get a museum to make money.”
Besides, Gillie added, Old School Square provides an economic benefit of millions of dollars annually by bringing people to the area.
“This is a 30-year relationship we had with the city,” Gillie said. “Where’s the love?”

Jane Smith contributed to this story.