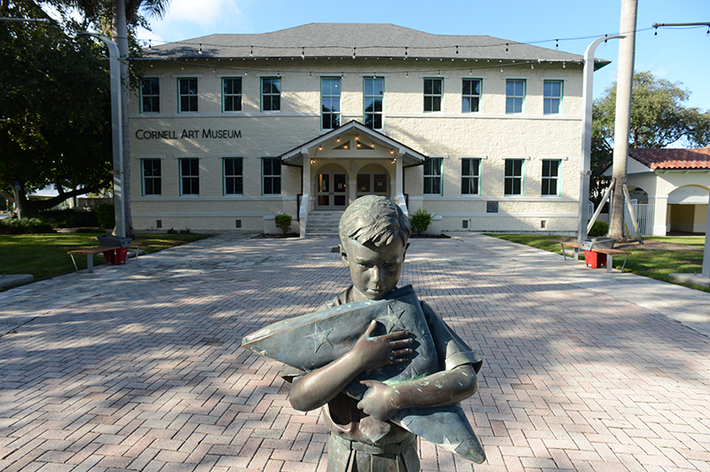 The Cornell Art Museum has been the centerpiece of Old School Square for decades. Jerry Lower/The Coastal Star

The decision to terminate the long-standing city lease with the Old School Square Center for the Arts board came swiftly, but the seeds of discontent were sown years ago.
Tired of excuses and missed deadlines for submitting fiscal audits — to show how the $1.7 million given Old School Square over the past three years had been spent — three city commissioners on Aug. 10 gave the center’s managers six months to vacate the historic premises.
“If not today, when,” Vice Mayor Shirley Johnson said after making a motion to end the 32-year-old lease, which was supported by Mayor Shelly Petrolia and Commissioner Juli Casale.
Deputy Vice Mayor Adam Frankel and Commissioner Ryan Boylston disagreed.
“To cut off a multiyear relationship over personality conflicts,” Frankel said, “that’s what I see is on the table.”
The city and the Old School Square board have been at odds for years, according to Petrolia. Her predecessor, Cary Glickstein, tried to rein in the Old School Square managers in 2016 with a tighter lease. Glickstein declined to comment.
The sour feelings came to a head when city commissioners learned that a $1.6 million renovation to the interior of the Crest Theatre, mostly underwritten by a private donor and undertaken by a board member, was underway without their knowledge.
Old School Square managers countered that they had gone to City Hall to secure the necessary permits, which should have served notice that the work was underway.
And they pointed to the lease, which specifies Old School Square managers’ financial reporting obligations, but does not specify how the city is informed about renovations. Frankel argued that the building permits approved by city staff would hold up in court as notice given to the city.
The tipping point for Petrolia was when she learned in early August the construction bond for the renovation protected Old School Square managers, not the city, which owns the building. When they refused to change it, “that’s what threw me over to the other side.”
She said Old School Square managers acted as if they —not Delray Beach taxpayers — owned the buildings. As examples, twice their executives signed the renovation permits as the owner of the Cornell Art Museum and more recently the Crest Theatre.

Outpouring of protest
After the 3-2 vote, Old School Square dug in its heels. Board members, staffers and volunteers mounted a strident social media campaign to force the commission to reconsider. Staff sent supporters commissioners’ email addresses and cellphone numbers, which generated a flood of emails and phone calls.
They took to Facebook, telling friends that three commissioners were trying to destroy the “heart and soul” of the city.
A Change.org petition, citing the city’s “unethical voting process, lack of due diligence and reliance on inaccurate information,” secured more than 10,000 signatures, although not all the signers were city residents.
In late September, managers canceled the popular series of fall art classes, saying they were forced to, in part, because of fallout from bad publicity from termination of the lease.
Tom Rutherfoord signed up for a four- week photography class in October. The instructor called him in late September and told him all classes were canceled.
“I paid about $200 for the class,” he said. “I’m sure they will return the money.”
Yet Old School Square’s website says it is not offering refunds.
“Why are you stopping a money generator?” asked Petrolia.
And when the city attorney tried to amend the lease in late June by adding a clause that any renovations over $65,000 would have to be approved by the City Commission, Brian Lipshy, the Old School Square managers’ attorney, balked. He said that kind of oversight was not required by the current lease.
Five days before the commission’s Aug. 17 meeting, Old School Square managers sent a six-page letter notifying the city of its intent to sue over the lease termination.
Just before the meeting, supporters held a rally outside City Hall. They wore black T-shirts with Old School Square logos and spoke passionately about their love of the arts center.
Scott Porten, a former Old School Square board chairman, said during the meeting, “You decided without notice and took the nuclear option.”
Equally passionate was Elise Johnson Nail, another former Old School Square board chair. She chided the commission for its decision, made without talking to the Old School Square board. “Why would anyone donate their hard-earned money to any nonprofit in this city, subject to the whims of the commission?” Nail asked.
None of the protests persuaded the three commissioners to revisit their votes. They said they were waiting for the full report from internal auditor Julia Davidyan.

Contractor’s dual role questioned
The decision to end the lease, seen as hasty to some, was a long time coming, others say.
Johnson, elected in 2017, said she wanted “to wean the nonprofits off the city dole.”
Johnson was invited to tour the Crest Theatre after she found out in late June that the theater renovation, which included a commercial kitchen, was underway.
She said she had no idea of the extent of the work.
Old School Square board member and project contractor Bill Branning nudged her and said, “Well, you do now,” Johnson recalled.
Philanthropist Margaret Blume, who underwrote $1.4 million of the renovation, said that because Branning is “a board member and a general contractor, I trusted him to represent my interests better than another general contractor. You go with people you have confidence in their work.”
Blume also scoffed at the contention that the City Commission was in the dark about the restoration. “For them to claim that they didn’t know about it is really ludicrous. In order to do any kind of improvement of property in the city of Delray Beach, or any city, you have to pull a permit” describing the nature of the work. “The city has to approve. The commissioners weren’t watching their own chickadees.”
Branning was part of the Old School Square team that came to the July 13 City Commission meeting to ask for retroactive approval for the Crest Theatre renovation.
Casale asked why the Crest renovation project wasn’t put out to bid.
“The renovation was brought to the Old School Square board” in February, Branning said. To avoid a conflict of interest, “I left the meeting while it was discussed. The board approved the contract unanimously.”
City Attorney Lynn Gelin questioned Branning’s dual role as an Old School Square board member and contractor.
“Because of our ethics rules and the reason the commission is struggling to understand how this can happen … it doesn’t pass the smell test,” she said to Branning. “It’s not enough just to step out of the room while the vote is taken.”
Still, commissioners unanimously agreed to let the renovation proceed.
They asked Davidyan to review the financial documents received and report back in 60 days.
The work was stopped on Aug. 5 by city inspectors.
“The representatives for Old School Square did not provide a performance bond that would properly protect the city’s interests regarding the completion and quality of the work,” Gina Carter, the city spokeswoman, wrote in a Sept. 14 email.
Although rumors abounded that the buildings would be torn down if the city severed the lease, the nearly five-acre campus — listed on the National Register of Historic Places — is deed restricted. It must remain an arts and cultural center. If it doesn’t, the property reverts to the Palm Beach County School District.
The campus consists of three historic buildings: the Crest Theatre (the restored 1925 Delray High School); the Cornell Art Museum (the restored 1913 Delray Elementary School); and the Fieldhouse (formerly the 1925 Vintage Gymnasium). An outdoor pavilion was added in 2002.

What’s next for campus?
The commission asked City Manager Terrence Moore to find a nonprofit to run the Old School Square campus.
He published his plan Aug. 27 on the city website and estimated it would take about five months to find a new operator. Old School Square Center for the Arts will be allowed to compete for a new lease if managers can fix discrepancies in their financial records and finish the renovation, Petrolia said.
Old School Square board Chairwoman Emelie Konopka said the board has not decided whether to apply for a new lease.
“We were planning for a workshop (with the city) to address the city’s concerns, but we were not afforded the opportunity,” she wrote in a Sept. 26 email to The Coastal Star.
The city funds nonprofits through its Community Redevelopment Agency. Johnson is the chairwoman of the CRA board, made up of the five city commissioners and two appointed board members.
The Old School Square managers received only the first-quarter payment of their annual request of $750,000 for the 2020-21 budget year.
The CRA requires an annual audit of any nonprofit before it can apply to receive tax dollars for the next fiscal year. Even with the ongoing pandemic, six other Delray Beach nonprofits supplied the necessary audits to the CRA in May with their money requests.
The CRA held back the other payments because the Old School Square managers have not supplied audits for the past two budget years and used the pandemic as an excuse.
The Old School Square managers should not receive the rest of their $582,500 from the CRA, even after the two audits are complete, Johnson told The Coastal Star on Aug. 25.
The first auditing firm, Holyfield & Thomas, dropped Old School Square as a client after Robert Steele resigned in May 2018 as the nonprofit’s chief executive and chief financial officer. The firm’s auditor left as well. Holyfield & Thomas then determined there was no one “with enough experience to work with Old School Square given their needs,” Renee Jadusingh, CRA executive director, wrote to CRA board members in mid-August.
The second auditing firm, Daszkal Bolton LLP, could not meet the Old School Square deadlines, Latoya Lawrence, the center’s CFO, said at the July 15 CRA board meeting. She promised the board that the 2018-2019 audit would be done by July 31.
But when Jadusingh called Daszkal Bolton after the deadline to find out why that firm no longer had Old School Square as a client, Michael Daszkal indicated that OSS was not in a position to complete audits for fiscal years 2018-2019 and 2019-2020, Jadusingh wrote.
“After months of not receiving adequate information, Daszkal Bolton LLP withdrew from the engagement.”

City auditor cites lack of info
On Sept. 10, two of Old School Square’s attorneys met with the city attorney and the city manager.
After some back and forth, Moore finally told them that they can apply to remain operators of Old School Square.
At the Sept. 13 commission meeting, Davidyan said the Old School Square managers were not in compliance with the city lease. She cited the lack of a strategic plan, no recent annual budgets, no recent outside auditing reports and no recent forms filed with the IRS.
The CRA budgets do not give the complete picture of what is happening at Old School Square, Davidyan said. “None of the items related to the capital improvements at the Crest Theatre building or by the donor were listed,” she said. “I’m told OSS has a separate construction budget.”
Discussions between Davidyan and the Old School Square staff ceased after the city received the notice of intent to sue.

Larry Keller contributed to this story.