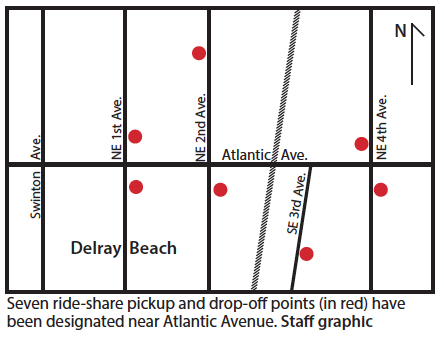 Delray Beach is tackling gridlock downtown by forcing delivery truck drivers and ride-share vehicles off bustling East Atlantic Avenue and onto the side streets.
The city now has seven designated side street stops that are marked with signs that read: Ride-share only.
Although the stops are designated for ride-share, delivery drivers must also use them during the day to unload their trucks. Ride-share drivers of vehicles, such as Uber and Freebee, must use the spots between 5 p.m. and 3 a.m. to pick up or drop off passengers. The drivers can spend only 5 minutes in the spot. Delivery drivers have no time limit for unloading.
The new rule also includes any drop-off or pickup of passengers on East Atlantic between Swinton and Fifth avenues. This includes friends or family.
The city started the program Nov. 1. Drivers caught discharging or picking up passengers were warned the first time, said Nairoby Bravo, police spokeswoman. The second time, they received a nonmoving citation of $115. The number of citations issued in November was not available.
“We’re following what airports do by having designated drop-off and pickup zones,” said Mark Denkler, chairman of the city’s Parking Management Advisory Board. Its members approved the plan.
Denkler operates three shoe stores downtown. He has seen that stretch of East Atlantic become clogged when no parking spaces are open, and the vehicles simply stop in the middle of East Atlantic to let out passengers or pick them up.
For people with mobility problems, the side-street solution is the lesser of two evils, Denkler said.
“It’s less dangerous for them,” he said. “Having the ride-share companies and even relatives turn down a side street, it adds only a half block that they have to walk or be pushed in a wheelchair.”