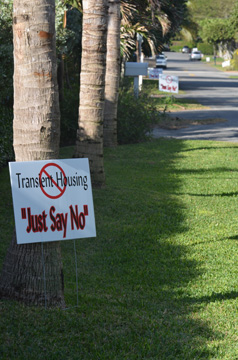 Decorated with photos of the “calming Atlantic Ocean,” a brochure for a proposed residence for recovering addicts promises: “You can’t get more private than this — gated and secure with no signage. Anonymity and discretion set the tone . . .”

But if the Caron Foundation, a nonprofit addiction treatment organization, gets city permission to open a  luxury sober house on Seaspray Avenue, it may not be able to keep that promise there.

Right now, three large signs decorate the lawn of the house directly across the street from 1232 Seaspray Ave.

“Caron Your Business is NOT WELCOME in our Single Family neighborhood . . .” the largest one, a weatherproof, roughly 3-by-4-foot poster says.

“Paparazzi Welcomed Here! We’ve got our eyes (and our lenses) on you!” another one says.

The third, and smallest, says “No transient housing!”

Signs with that last message also stand in front of every other house on the street, and are Seaspray Avenue residents’ response to a planned residence for affluent recovering addicts in their neighborhood.

The sign sums up the unifying theme of residents’ objections to the plan, said Kelly Barrette, one of the neighbors who had distributed close to 100 signs in four days during the third week of January.

“It’s a single-family residence community,” Barrette said. “It’s the constant turnover of people who we never get a chance to know. It’s a transient issue.”

The planned residence is seen as blight on a quiet and close-knit residential street.

Caron has said that its clients will receive all their clinical treatment at its facility in Boca Raton. But its assurances that the “boutique” center would offer “exclusive services” and house wealthy, elite and “discerning” clients has done little to comfort neighbors, Barrette said.

“Like having Lindsay Lohan in there was going to make it better,” she said.

Not one neighbor has turned down a sign, she added.

George Whitney of Nassau Street, who was alarmed at what turned out to be a false report of plans for a sober house in his neighborhood came over to “see what was going on” on Seaspray Avenue. He found a group of Seaspray neighbors discussing Caron.

“It affects every street, because it opens the door to similar businesses,” Barrette said.

“If it was any business,” insisted Beach Drive resident Steve Alport, “I’d be against it.”

The neighboring town of Gulf Stream,  “doesn’t even allow Tupperware parties,” another in the group mentioned.

The nature of this particular operation, though, has clearly galvanized a street tucked off AIA where neighbors know each other, said Mindy Farber, a neighborhood resident and attorney.

Caron’s application in front of the city’s Planning and Zoning Department asks for “reasonable accommodation” that would allow more unrelated people to live together than the three allowed by current zoning.

The application seeks to house up to seven people in the five-bedroom, $3 million house. Caron has said the clients would pay up to $60,000 a month for a minimum two-month stay.

It also cites federal regulations that it says prohibits disclosure of the name of the client and the nature of the problem being treated.

“They’re not saying if its sexual predators or people who are registered sexual offenders,” said Mindy Farber, a neighborhood resident and attorney. “It’s one thing to be a friendly neighbor; it’s another not to be told who your neighbors are. It’s totally creepy,” she said.

Farber, who has served as vice president for the American Civil Liberties Union chapter in Montgomery County Maryland, says the signs are protected by the First Amendment.

“The signs themselves may be protected by the First Amendment,” Green agrees. But he adds the future residents of a future Caron residence — wherever it may be — are protected as well by the Fair Housing Act.

Delray’s Planning and Zoning department has until Feb. 2 to make a decision on Caron’s application. If it denies the request, Caron has 30 days to appeal the decision to the City Commission.

The signs will stay as long as a house for recovering addicts is planned on their street, Seaspray residents say.

“This is a statement we felt like we needed to make,” Barrette said, “to make sure they continue to hear us.” 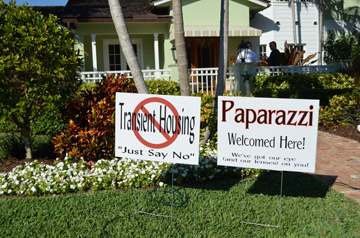