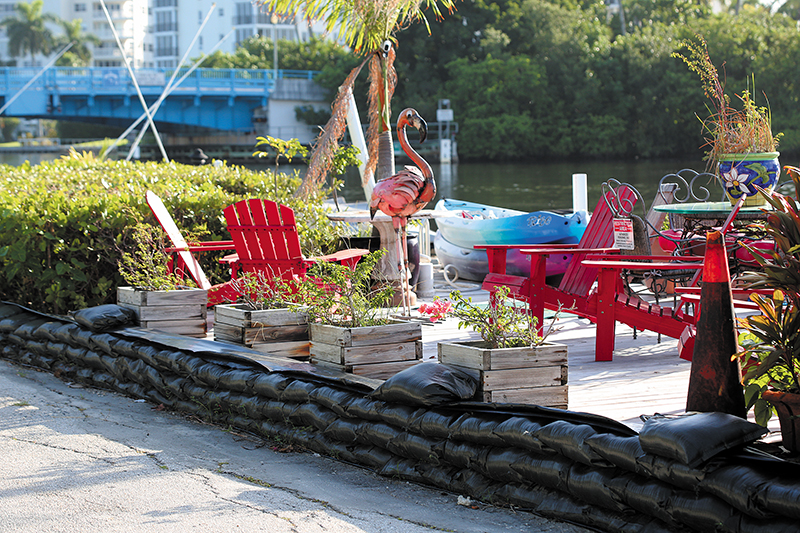 ABOVE: Resident Clair Johnson had 1,200 sandbags placed along the east side of Marine Way in anticipation of floods from king tides and storms. BELOW: City workers removed the bags, much to Johnson’s dismay. Photos by Tim Stepien/The Coastal Star Another fall of king tides is coming, which is bad news for Delray Beach residents who live on Marine Way.
They will likely see water pushing through the crumbled and submerged Intracoastal Waterway seawall, flowing into their yards and, in some cases, their homes.
Last year, the city said it did not own Marine Way and as a result couldn’t start work to deter flooding. Thanks to a recent title search, however, the city now says it owns the block-long street and finally can begin the task.
The city says the work will take at least 24 months but has not said when it will begin.
The city has set aside $2.8 million for Marine Way improvements, to include a new sea wall, road and drainage improvements and a stormwater pump station.
Another $4.6 million is earmarked to rebuild the city marina, just to the south.
Marine Way residents say they have been waiting for more than three decades for relief.
The one-block stretch has a roadbed decayed from tidal flooding, private and unauthorized docks and a sea wall that’s been broken and ineffective for decades.
When Delray Beach was ready last summer to start the improvements, its project consultant contended the city did not own Marine Way, according to a June 19, 2018, letter from former City Manager Mark Lauzier.
“The city has no legal standing to proceed,” Lauzier wrote to Marine Way residents.
Again, in December, city staffers said they were researching the ownership of Marine Way.
Frustrated by the delays, longtime Marine Way resident Clair Johnson began building a three-sandbag-tall wall this spring.
It was on the eastern side of Marine Way, along 440 feet of the Intracoastal.
“I researched the city’s development rules and did not see any mentions of sandbags,” Johnson said.
The 72-year-old started filling the sandbags himself, but after he filled and stacked 80, he hired his lawn guy and a worker to do the remaining 1,120 bags.
“I’m just too old,” he said.
The wall was three-fourths finished when Johnson received a code violation on July 8. The notice gave him 72 hours to remove the sandbags.
What changed?
The new city attorney asked a different consultant, a lawyer who concluded the city owned the street.
“I wasn’t the city attorney at the time (Lauzier’s) letter was sent out,” wrote City Attorney Lynn Gelin in an email. Lauzier was fired in March.
“When I became aware of the issue as the city attorney, I reviewed old files and consulted with the city’s outside counsel, Steven Rubin,” Gelin wrote. “I don’t know if that was done by Mr. (Max) Lohman (the previous city attorney) or Mr. Lauzier.”
Rubin replied in a July 1 letter that his title search documents show that the city owns Marine Way.
Twelve city workers dismantled Johnson’s sandbag wall and carted the sandbags away.
Neighbor Genie DePonte said, “They should have left the sandbags up to see whether they are a short-term fix.”
Her title-search documents say she owns the property to the Intracoastal. “The city is overusing its power,” she said.
“I don’t want the city to take away my dock,” DePonte said. “It’s part of my property’s value. I’ve paid taxes on it for 30 years and have permits for it from the city and the Army Corps.”
Johnson said the city is relying on a faulty survey from 1939 to show ownership. The surveyor relied on a 1931 document where the heir to the Frank T. Noble estate erroneously gave the city roads, including Canal Street/Marine Way, that he did not own, Johnson said.
He plans to take the city to court to cover the cost of the sandbags and the expected water damage to his home in the fall from the king tides.
The four other buildings on Marine Way are owned by lawyer Adam Bankier and developer Burt Handelsman’s ex-wife and adult children. None could be reached for comment.

Marina delay discussed
Separately, Delray Beach staff met again in late July with marina-area residents at the Veterans Park community center to explain why that project is still delayed.
The marina work was supposed to start in May, but the two lowest bidders dropped out, according to city documents. On May 21, the City Commission awarded the contract to B&M Marine Construction Inc. of Deerfield Beach. Work began July 29 when B&M started preparing the site. The actual construction will start at the end of August, said Glen Bryant, B&M president.
Even though the commission awarded the project on May 21, B&M could not start immediately, said Isaac Kovner, project manager. Contracts had to go back and forth between the city and B&M, insurance had to be acquired by B&M and then a purchase order signed, Kovner said on July 30.
The city has lost about $25,000 in rental income from the marina, which leases 31 boat slips, eight designated for live-aboard owners.
The boaters were ordered to leave by May 1 and won’t be able to return for another year if the work schedule holds.
“Will there be Wi-Fi and any security cameras?” live-aboard boater Dylan Henderson asked.
Kovner said the marina will have Wi-Fi but not security cameras. After groans from some meeting attendees, he said the contractor might be able to supply the connections for the security cameras.
The project will bring new floating docks, a raised sea wall, drainage and lighting improvements, a new pump station and new streetlights and landscaping. A small park just west of the sea wall will hold stormwater runoff.
Architect Roger Cope, who also chairs a city advisory board, asked about the design of the new planned gazebos at the marina. He suggested the city use the same plans as the new gazebos at the beach.
“That way, no approvals will be needed,” he said.