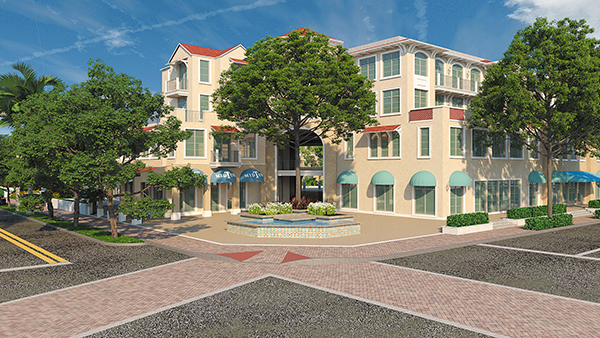 Hudson Holdings’ Midtown Delray project would sit on the south side of Atlantic Avenue in the Old School Square Historic District. Rendering provided

The city’s Historic Preservation Board unanimously rejected a site plan for Midtown Delray last month, saying the project hadn’t changed enough since it was last reviewed as Swinton Commons in June.

At the special meeting on Dec. 19, the seven-member board also unanimously denied waivers that would have allowed new buildings to be wider than the historic district’s 60-foot rule, and a landscape plan that allowed the developer to pay $139,800 to the Delray Beach Tree Trust Fund. The money would compensate the city for the developer’s removing trees from the western side of a South Swinton Avenue block.

“The visual compatibility standards are for comparison with the historic structures on Swinton Avenue,” said John Miller, board chairman. “We also need to consider the rhythm of the buildings on the street and the open spaces between them.”

The proposed 6.4-acre Midtown Delray project would sit on the south side of Atlantic Avenue, within the Old School Square Historic District. The district carries a local historic designation and will soon be listed on the National Register of Historic Places.

Of the city’s total properties, only 1.75 percent is historic, Miller said.

“If we can’t save this historic district, we might as well resign our seats on the board,” he said.

The site of the proposed Midtown Delray contains three structures associated with the city’s history.

The Sundy House, built in 1902, was the home of the city’s first mayor, John Sundy. The two-story building carries local and national historic designations. The Sundy House now houses a restaurant and a bed-and-breakfast inn.

The Cathcart House was built in 1902 in the French Colonial Revival style. The two-story building is named for William Cathcart, who purchased the home in 1910 and ran a lumber company.

The Rectory, built in 1912, was part of the original Methodist church destroyed by the 1928 hurricane. The historic building now houses the Yaxche Tearoom, featured on culinary tours.

On Jan. 2, the team appealed the Historic Preservation Board’s denials of its site plan, relocations and demolitions to the City Commission. Hudson Holdings Managing Director Steven Michael is banking on the success of the project because he lives in Delray Beach. In a prepared statement on Dec. 20, he said his firm has met with community leaders many times to discuss historic concerns, job creation, tax base increase and revitalization of the south and southwest neighborhoods.

“We have amended and redesigned this site plan significantly to accommodate many local requests. We have changed things from trees and landscaping to tile in the courtyard, as well as public courtyard designs,” he wrote. “We have reduced density as well as height. We have worked with the community tremendously in good faith and we are now prepared to go to the City Commission with an improved and first-class project.”

Architect John Szerdi, who said he’s worked 20 years on the property, said Midtown Delray would eliminate nearly 2 acres of surface parking with an underground garage, created in the first block and under the historic structures.

Midtown Delray also will no longer have the two hotels it planned in June, Szerdi said. Now the project plans to build residential inn units, sold individually as condos, he said.

Eleven of the 17 people who spoke at the Historic Preservation Board meeting were against the project.

Expert witness Steven Avdakov, hired by the private Historic Preservation Trust group, is a registered architect in five states and holds a master’s degree in historic preservation from Columbia University.

“The Secretary of Interior standards [for historic designations] are close to the Ten Commandments, the bible of historic preservation,” Avdakov said. Structures should not be shifted around on the site in a historic district and demolition was permanent, he said. The Miami Beach-based architect called for retaining an authentic sense of history, not a “Disneyfied version.”

They also won’t go against him in case they have to appear in front of him on the state’s Review Board, Peart said. That board hears applications from local historic projects that want to be listed on the National Register.

Gonzalez also took a different position about development at the Old School Square site three years ago. Before he worked for Hudson Holdings, the Delray Beach Planning Department hired him as an expert on historic districts.

Gonzalez spoke at the June 17, 2014, Delray Beach City Commission meeting when the city considered a private application to allow a commercial district overlay in a portion of the Old School Square Historic Arts District.

Hudson Holdings wanted the overlay to build higher structures, decrease the space between new buildings, and construct hotels. Allowing the commercial overlay, Gonzalez said in 2014, would be “basically deteriorating the south side of the district, cutting its leg off.”

At the Dec. 19 meeting, Gonzalez said, “Historic preservation needs development that is slightly lower than allowed by code.” He called Midtown Delray “a positive change for Delray.”

John Boyle, who lives nearby, said Midtown Delray “is exactly what the neighborhood needs. Most of my neighbors agree.”

Historic Preservation Board member Price Patton is a founding partner of The Coastal Star.