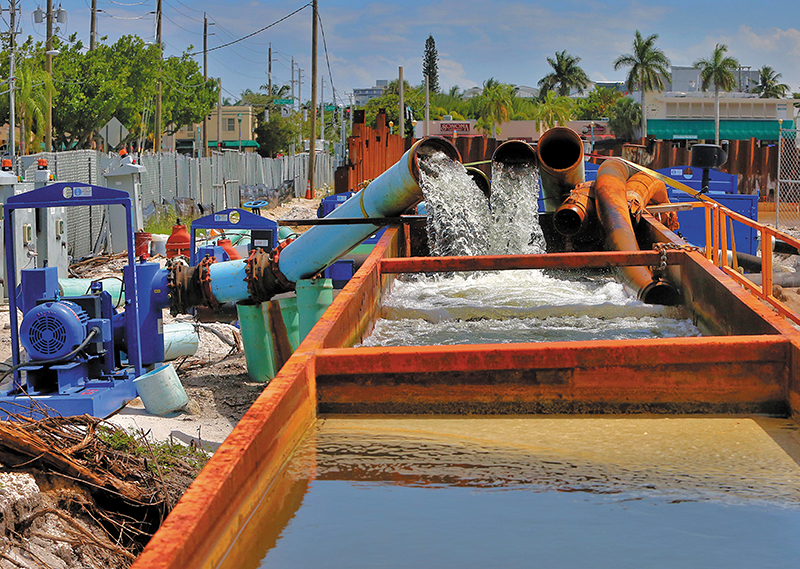 Concerned Delray Beach residents are monitoring the massive Atlantic Crossing development underway at the northeast corner of Northeast Sixth and Atlantic avenues.
They post on Facebook, send emails to the city commissioners and lately, alert environmental regulators about possible missteps.
In late April, when they saw dirty water pouring into the Intracoastal Waterway from the construction site after heavy rains, some went into overdrive and contacted city commissioners; regulators from the South Florida Water Management District and the local office of the Florida Department of Environmental Protection; county environmental resource managers; and even 1000 Friends of Florida, a nonprofit smart-growth advocate.
Just north of Atlantic Avenue, Atlantic Crossing has a water district permit to pump filtered underground water into the city’s stormwater system.
The developer of the 9.2-acre project wants to create an underground garage and needs to dewater about 4 acres. The groundwater is pumped through three filtering tanks and into the city’s stormwater system that pours into the Intracoastal Waterway at the northeastern edge of Veterans Park.
“It looks worse than it is,” said Missie Barletto, the city’s deputy director of public works. “They are allowed to transfer sandy water but not to exceed the limit set by their permits.”
The city can only monitor the permits given by the water district and the state DEP, Barletto said.
The dirty water sparked the latest round of controversy for the $300 million complex of residences, offices, stores and restaurants.
On May 5, Kelly Barrette, who lives on the barrier island, posted two photos on the Delray Raw Facebook page with this statement: “I wouldn’t plan on underground parking any time soon at Atlantic Crossing.”
One photo shows a big water-filled pit behind a chain-link construction fence where workers on the Atlantic Crossing complex are digging the underground garage.
The other appears to be taken from the east side of the Intracoastal and shows very dirty water flowing into the ICW at the northeastern end of Veterans Park.
The next day, Barrette sent the photos to city commissioners, asking, “Is there a specific time frame for AC to demonstrate they are going to be able to get rid of the water and actually build the underground parking garage?”
On May 10, Rita Bove, who lives in Barr Terrace condominiums directly across the Intracoastal, posted a photo showing the dirty water flowing into the Intracoastal.
Also about that time, John Miller, a fisherman and former chairman of the city’s Historic Preservation Board, posted that he had sent emails to the Department of Environmental Protection and the Florida Fish and Wildlife Conservation Commission about the possible pollution in the Intracoastal.
The FWC responded that it gets involved only when biohazards are present in the water, an oily sheen is present, or the runoff is killing fish.
When asked about the perceived problems with the garage construction, Don DeVere, vice president of Edwards Cos., replied via the company’s publicist Andrea Knibbs: “Construction of the western garage is progressing, with plans designed and engineered to deal effectively with all the conditions that come with building an underground garage in this specific location.”
Atlantic Crossing sits at a low point in Delray Beach with only Veterans Park separating it from the Intracoastal.
Edwards was brought into the project about seven years ago by real estate investor Carl DeSantis. He sold the project to Edwards in June 2016 for $38.5 million. But DeSantis remains involved through a $16.5 million loan on the eastern half that houses Atlantic Plaza. 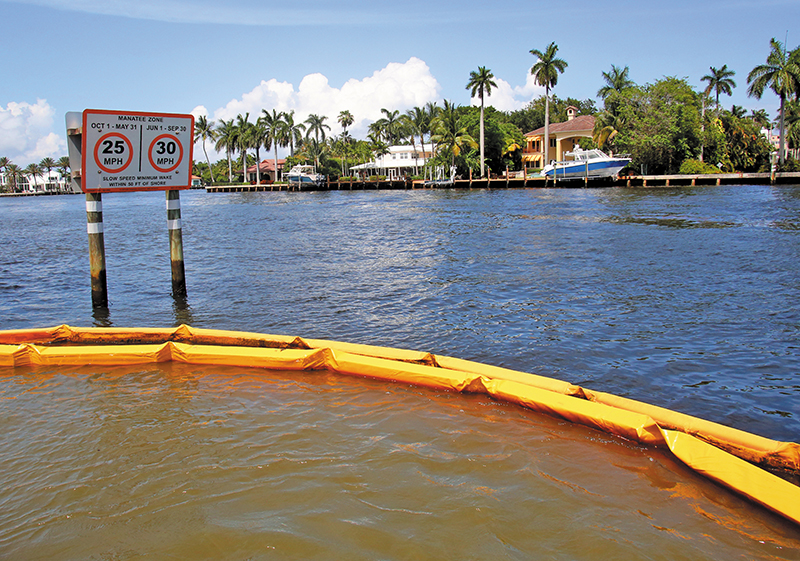 Prompted by social media postings in late April, city staff inspected the area near the outfall pipe at the eastern end of Northeast First Street.
Patrick Figurella, city engineer, recommended the turbidity barrier be lengthened by 10 feet. The barrier consists of a floating yellow PVC buoy attached to a PVC curtain that is kept vertical by heavy chains along the bottom.
“The barrier wasn’t fitting snugly to the sea wall,” Barletto said on May 8. The contractor had to fabricate brackets to hold the barrier closer to the sea wall.
After the brackets were installed in mid-May, they “are doing a satisfactory job of holding the turbidity barrier closer to the sea wall, as requested by the city,” Barletto wrote in a May 22 email.
Water Management District and DEP regulators have said the new configuration is acceptable to them, Barletto wrote.
In April, the city found the project did not exceed its sediment limits, called nephelometric turbidity units. Its dewatering permit allows a maximum reading of 29 NTUs above the turbidity level of the Intracoastal. Turbidity measures how clear the water is.
Figurella also wrote that on April 23 the contractor replaced a damaged sock filter on one of the tanks.
But the water district found one reading on May 2 at 37.48 NTUs.
“They were also digging for an elevator shaft, using a sump pump, that caused the increased turbidity,” said Wayne Blythe, head of the environmental section at the Water Management District.
It’s not an “egregious violation,” Blythe said. “Sometimes we have situations where the reading is hundreds over the limit.”
The water district is seeking “compliance, rather than fining,” Blythe said. “The contractor is on our radar screen. He knows he is subject to increased scrutiny.”
That permit allows the contractor to remove water 12 feet below grade at a rate of 1.5 million gallons a day, or more than two Olympic-size swimming pools a day. That permit expires March 31, 2021.
The local office of the state DEP allows the contractor to keep an approved copy of its stormwater pollution protection plan and weekly inspection reports on site, Jill Margolius, local DEP spokeswoman, wrote in mid-May.
“The Southeast District Office has received multiple complaints with regard to dewatering activities and discharge to the Intracoastal Waterway [from Atlantic Crossing],” Margolius wrote. “The department dispatched an investigator to the site in response to these complaints. We are working on an inspection report.”
The report was not available at press time.
When asked whether the underground garage is the best way to handle the vehicles of Atlantic Crossing’s patrons with its proximity to the Intracoastal, DeVere wrote: “The single level of underground parking, while more costly and demanding to build, allows for the public open space and cohesiveness that makes this possible.”
He also said that once finished, the underground garage will need pumps to keep it dry and generators that would turn on during major storms.