From Delray to Dallas and back, Tavarius “T.J.” Jackson is a success story.
Jackson earned his way from the Delray Beach housing projects to a chance with the Dallas Cowboys, one of the best franchises in the NFL.
Now he’s Coach Jackson and leads the football program at Atlantic High School in Delray Beach, working with kids who live in the same neighborhood in which he grew up.
The former Olympic Heights High School star’s dream to play for coach Steve Spurrier at the University of Florida collapsed because he couldn’t perform in the classroom the way he could on the football field.
That could have been the end for him as an athlete, but with the support of his parents, Jackson brought his test scores up and did get a college scholarship — at Virginia Tech, where he earned a bachelor’s degree and played linebacker. After he graduated, the Cowboys picked him up as a free agent in 2003.
That didn’t work out, but it affirmed to Jackson that his education was just as important as athletic ability. It’s a common lesson. Every year, athletes who squeaked by in high school — some by the misplaced good graces of teachers — quickly flunk out of college.
“You have to be disciplined in the classroom and on the field. Self-discipline will carry you a long way in life,” Jackson said.
And he lives this philosophy even now: “You can get emotional,” Jackson tells his players, “but you’ve still got to stay in control and be accountable for what you do and what you say.”

A standout coach
Kevin Logan of Ocean Ridge has been the athletic director at Atlantic High School for 33 years — he’s even a graduate of the school — and he’s seen plenty of coaches come and go.

“He’s been here five years, and each year he does more,” Logan said of Jackson. “To him, football is a year-round commitment. Coach is always doing something: fundraising, holding SAT tutoring, arranging after-school programs. He’s gotten the teachers involved helping with academics and he’s gotten the community involved holding fundraisers.
“We have 135 kids between the varsity, JV and freshman teams, and most of them are from rough neighborhoods. Very few of them could raise the funds needed to play a sport. The insurance alone is $75.”
Somehow, Jackson finds a way to get the players what they need, even if it means digging into his own pocket.
“He finds the money to pay for equipment players need, plus special game day jerseys players on the team get to wear to classes on game days,” Logan said. “In turn, players must keep up their grades and stay out of trouble. When they are wearing team colors, Coach expects them to behave.”
Jackson has gotten good results on the field. The Eagles, who were 3-8 in his first season in 2013,  went 12-1 in 2015 and 9-4 last season, getting within one game of the state playoff semifinals both seasons.

Prep & Sports nonprofit
Jackson sings the praises of the city of Delray Beach and its business community.
“Delray is a unique city,” said Jackson, 38. “There’s a lot of support here.”
But you need the right kind of support.
Josh Rosen, the star quarterback at UCLA, made the news recently when he said playing college football and keeping up academically is like having two full-time jobs.
“It’s not that some players shouldn’t be in school; it’s just that universities should help them more — instead of just finding ways to keep them eligible,” Rosen said.
But even the first day of college is too late to start helping, Jackson said. It has to start in high school, even middle school.
In 2005, Jackson teamed up with another former football player, Jamael Stewart, and they founded Prep & Sports Inc., a nonprofit

organization that turns at-risk youths into scholar-athletes by providing practical academic support, tutoring and skill-building, as well as emotional support through athletic mentorships, training and guidance. Tutors are certified teachers with a passion for kids and mentors include current and former NFL players who keep in touch with the kids through social media.
Right now, Prep & Sports has 125 young men training in a variety of sports at its facility on Federal Highway.
“The program has a 100 percent on-time graduation rate,” said Stewart, whose day job is assistant director of community improvement for Delray Beach. “We started with kids who were gifted athletically but weak academically. They were rough around the edges. A lot of these kids would drop out of school after football season.”
Jackson told them, “They can always take sports away from you, but your education, they can never take that away.”

A cautionary tale
As proof, the coach offers Kevin Lubin.
Jackson was an assistant coach at West Boca High and Lubin was a gifted athlete who had started at Prep & Sports with a 0.3 GPA and a juvenile record. By senior year, the 5-foot-11, 260-pound lineman had brought his GPA up to 3.2. He was dreaming big, his sights set on the University of Miami. With Jackson as his mentor, Lubin’s future looked golden.
Then, just before midnight on Thanksgiving Eve 2007, Lubin met his friends Dante and Jermaine on Atlantic Avenue, just blocks from his home. They were walking to Lubin’s car when a silver Chrysler rolled up and a masked man shot Lubin and his friends with an AK-47.
Lubin’s left leg exploded, and two of the 14 bullets were so close to his heart, surgeons were afraid to remove them. It took nearly a full day to patch Kevin Lubin back together. His football dreams died right there on Southwest Second Street.
For 23 hours, Jackson never left the waiting room, and he stayed at Lubin’s side through his rehabilitation.
“That was one of the hardest things I had to deal with,” Jackson said. “It was tough on me, and it took me a while to come out of my shell.”
“It was a very difficult time,” recalled Stewart. “T.J. was at the hospital every day with that young man. And [Lubin] went through a big slump, but we mentored him through that.”
Lubin now works as a mentor in Delray Beach for parks and recreation, because so many youngsters still need help.

A life forever changed
Fortunately, players like Brisly Estime remind Jackson why he’s doing what he does.
Estime didn’t begin playing football until his freshman year of high school, but under Jackson’s wing, the boy who came from Haiti at age 5 became one of the best players in the county.
The 2013 Atlantic graduate known for his speed converted his success on the field into a full scholarship at Syracuse University. The 5-foot-9, 185-pound Estime was a wide receiver and one of the best punt returners in the country. He signed with the NFL’s New York Jets as an undrafted free agent this year but sustained a torn Achilles tendon in offseason workouts. He plans to resume playing when he recovers.
“Coach Jackson is a great person and a great man,” Estime said by phone. “I appreciate everything he does for kids. He’s a great coach and he loves football, but he really loves helping kids.”
Estime says Jackson taught him much more than football: “He taught me life skills.”
And when Estime walked across the stage to get the diploma for his degree, Jackson was there. He’s a consistent presence in kids’ lives, and that consistency is something a lot young men don’t have.

A nourishing start
Each Friday, Jackson provides a game-day meal because he knows some of his young men don’t have enough food to fuel their dreams.
Jackson understands hardship and disappointment. He grew up in the Carver Estates housing project, where he saw drug abuse, violence and poverty every day.
“But I had family support,” Jackson said.
“You know what really bothers me? Seeing adults that aren’t there for their kids. Their kids need the help and they don’t step up. That’s very mind-altering.”
You can hear disgust in his voice. “But I don’t let it distract me. I keep moving forward.” 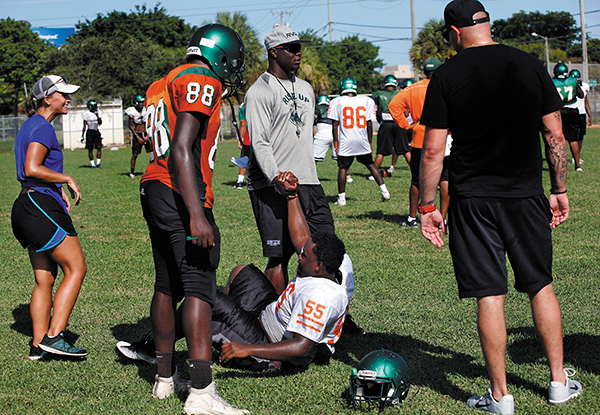 Atlantic coach T.J. Jackson helps up one of his players. Jackson also is part of a nonprofit that gives academic and athletic support to at-risk youths. Tim Stepien/The Coastal Star