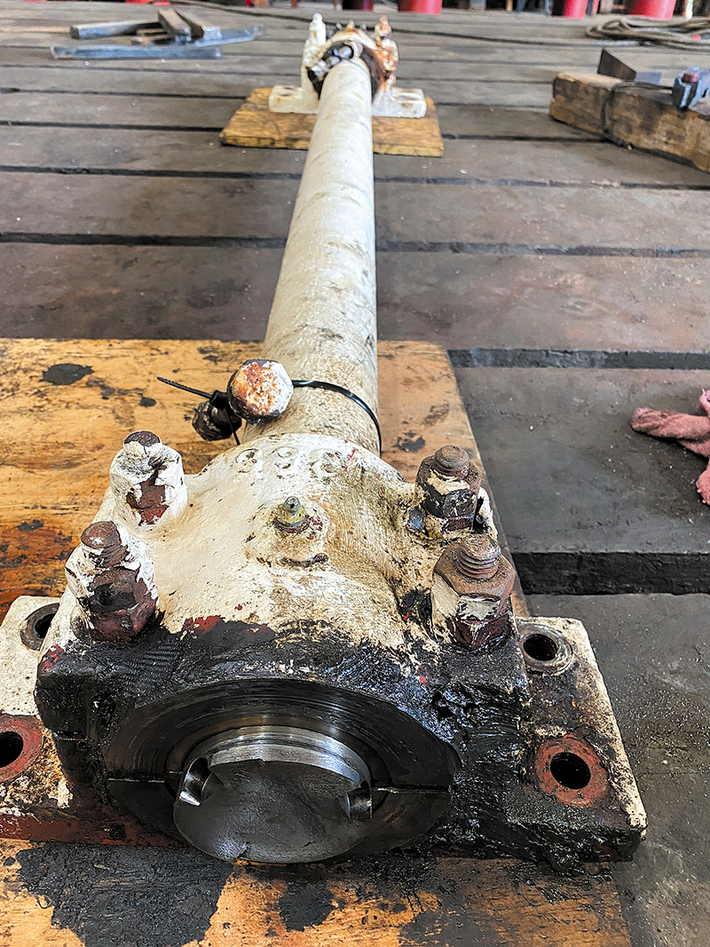 Palm Beach County engineers showed county commissioners pictures of the broken shaft that forced closure of the George Bush Boulevard bridge in Delray Beach for most of March and April. Photo provided

In their first detailed account of efforts to fix the George Bush Boulevard bridge, county officials told commissioners on May 17 that initial repairs were halted in late March when consultants determined that key parts needed additional work in the shop.
The bridge reopened April 29 after a 57-day shutdown. The cost of repairs, borne by four consultants, came to $206,910, an amount paid from Palm Beach County reserves.
Additionally, the county took a first step toward replacing the bridge, issuing a formal notice May 12 for a $5.5 million project to study design and financing options for a new bridge and then, in phase two, to design the replacement bridge.
In his presentation to commissioners, Assistant County Engineer Steve Carrier showed pictures of the broken shaft that stopped the bridge in midair and was shipped for rebuilding to Steward Machine in Birmingham, Alabama.
After shipping the part on March 7, the county hired New York City-based Hardesty & Hanover, which has offices in Fort Lauderdale, to oversee repairs.
H&H recommended replacing additional drive-shaft parts in mid-March. But when the parts were installed on March 28 and 29, H&H halted work because tolerance limits were exceeded and shipped the parts back to Steward for adjustments.
Workers reinstalled the parts from April 4 to April 8 and began testing, with the bridge reopening to traffic April 29.
The county also hired H&H for $72,000 over 12 months to continue monitoring the bridge.
After his presentation, Carrier announced plans to add detection equipment and an audible warning system to enhance safety at the county’s eight drawbridges. The move comes after West Palm Beach resident Carol Wright fell to her death Feb. 6 after the state-owned Royal Park Bridge in downtown West Palm opened while she walked her bike across it.
The county also plans additional training for bridge tenders, public service announcements, better signage and cameras to detect people in harm’s way.
In South County, the county owns movable bridges at Palmetto Park Road, Woolbright Road, George Bush Boulevard, Linton Boulevard, Ocean Avenue in Lantana and Camino Real in Boca Raton.
While movable bridges are inspected annually, the details are not readily available to the public, The Coastal Star reported in May. The county cited the newspaper a $1,025 fee to redact security information and make available a single inspection report.