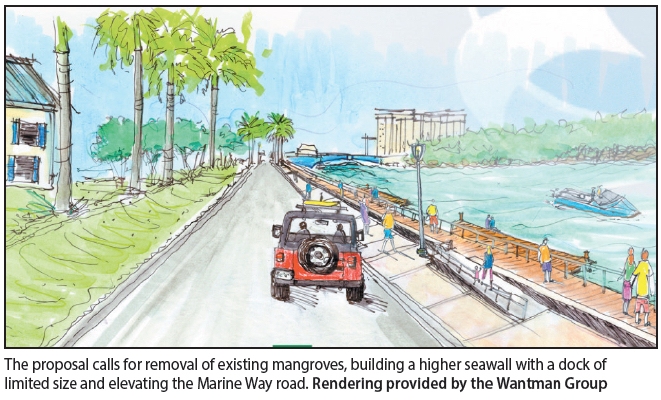 After more than a decade of study, Delray Beach is ready to redesign the first block of Marine Way.
On Sept. 17, four city commissioners awarded the Wantman Group of West Palm Beach the $1.1 million design contract — with a condition.
They want the staff to work with the four affected property owners to “have a meeting of the minds,” as Mayor Shelly Petrolia called it. “Either side can’t have everything.”
Vice Mayor Shirley Johnson voted no to the contract award because she says the project is being rushed and wants the property owners to be more involved.
The redesign will bring a higher sea wall, a promenade that connects Veterans Park to Marine Way through an underpass beneath the Atlantic Avenue Bridge, a stormwater pump station at the south end of the block, roadway and utility upgrades and pedestrian lighting. Wantman will also obtain necessary permits from state, federal and local agencies.
The estimated $16 million work is set for the 2023-2024 budget year, using penny tax money, according to the city’s capital improvement budget passed on Sept. 17.
The removal of mangroves was one issue that spurred discussion.
“Removing the mangroves will allow us to get the permits faster,” said Missie Barletto, deputy director of Public Works. “We’ll have to replace them somewhere else on a three-for-one basis.”
The idea of mangrove removal irked Deputy Vice Mayor Bill Bathurst.
“There should be a way to have them and not turn the Intracoastal Waterway into a bathtub,” he said. “How much longer would it take to get the permits if we saved the mangroves?”
Mangroves protect shorelines from damaging winds and waves, and they help filter pollutants. They also serve as nursery areas for fish.
Everyone agrees the first block of Marine Way floods during heavy rains and high tides.
On Sept. 3, the block was under nearly 3 feet of water. Hurricane Dorian’s strong winds were swirling offshore, pushing ashore brackish water from the nearby Intracoastal Waterway. King tides, the highest of seasonal tides, made the rising water even higher.
The water was so high that resident Genie DePonte and friend Gayle Clark used a kayak to travel the block.
City Attorney Lynn Gelin called the flooding “a health and safety issue.”
DePonte and Adam Bankier, two of the four property owners on the block to be redesigned, spoke during public comment.
“It’s my little bit of paradise with the mangroves,” DePonte said. “I bought my house with the dock. It’s an eminent domain issue when you take real property from the residents.”
The Palm Beach County Property Appraiser includes docks when assessing the taxable value of properties. But the office does not break down what percent of a taxable property value comes from the dock.
Bankier, who said Intracoastal water has flowed through the first floor of his property, also pointed out that the city is using tax dollars to remove his dock. “Why can’t public money be used to rebuild them?” he asked.
Clark, who lives nearby on Northeast Seventh Avenue and spends a lot of time on Marine Way, said she is fond of the mangroves and greenery. “We need to save the charm of Marine Way,” she said.