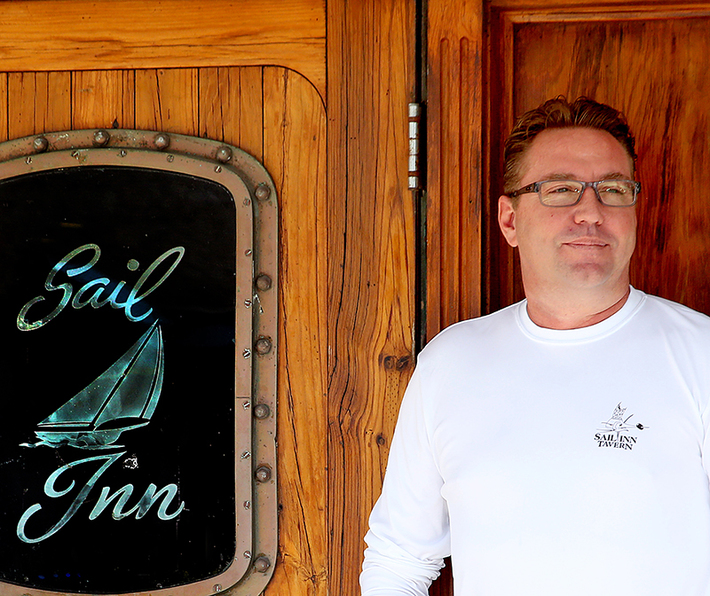 “Happy hours have not been as happy” at the Sail Inn since George Bush Boulevard construction work moved east of Federal Highway in January, Raams says.
The $2 million project includes a road resurfacing, utility and drainage improvements and adding 5-foot sidewalks and bike lanes. Work started in July and is expected to go until the summer of 2023.
If that wasn’t enough, the bar was hurt again when the nearby bridge broke in the open position March 3.
“We had a great flow from the city’s St. Pat’s Parade in the past,” Raams said, referring to before the pandemic hit. “But this year, the customers just could not reach us.”
Bicyclists and walkers used to come to the Sail Inn on weekends from the beach, but they can’t get to the bar while the bridge is not usable, Raams says.
“I love the beautification of George Bush Boulevard,” he says. “I just wish there was a way to have the bridge be closed in the down position permanently. That way, the traffic could travel across and the bicyclists and walkers could use it. And let the boaters find another way.” 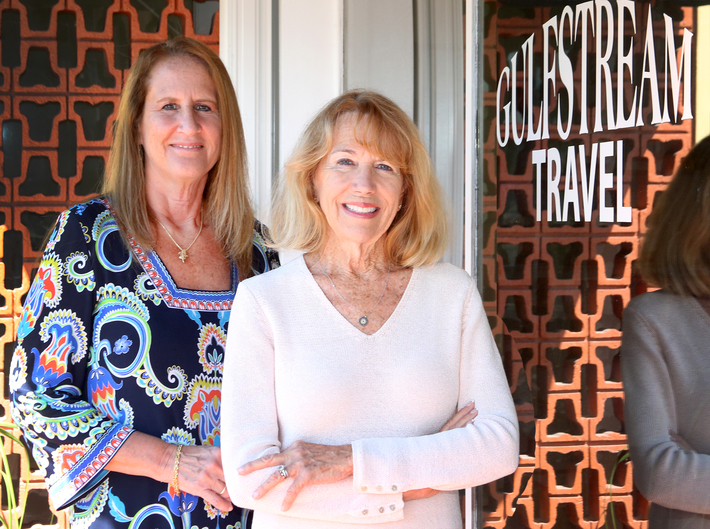 At Gulfstream Travel, with all the surrounding traffic confusion, Meiners says “we do not try to explain how to get here.”
Besides the road construction work and bridge closure on George Bush Boulevard, sometimes Palm Trail from Bond Way is not passable because of condo and home construction, Meiners says.
The travel agency does most of its work online to assist clients who do not have easy access to the office, she says. It delivers tickets and other items to about 20% of its clientele, she says.
Since construction moved in front of the office, on the corner of Palm Trail and George Bush Boulevard, Meiners has had an up-close view of the road work.
“It’s been challenging,” Meiners says. But Kessman says they have endured worse.
“If we lived through COVID, we can survive anything,” Kessman says. The George Bush Boulevard construction affected the 800 Palm Trail Grill “somewhat,” but the unusable nearby bridge “is costing us greatly,” Chelsea says.
Diners from Gulf Stream were flocking to the new restaurant when the bridge became stuck in the upright position. Chelsea estimates his restaurant, which had been open Tuesday through Saturday, has lost between $3,000 and $4,000 each day since the bridge became impassable March 3.
“We have free parking and it’s not on Atlantic Avenue,” features he says add to the restaurant’s appeal. It can be a slog to drive on Atlantic, where parking meters are in effect in the evenings.
Chelsea isn’t thinking about changing anything in an attempt to bring in more diners, saying it would be too confusing, though the restaurant was to begin Sunday brunches starting March 27 and will open on Mondays starting April 4.
Instead, the restaurant’s website lists detour info about the road construction with the phone number and email address of the project’s community outreach specialist. Along Bond Way and Palm Trail, Chelsea has posted signs for the restaurant. Just when Laquerre thought the worst of George Bush Boulevard construction would be finished soon, the bridge over the Intracoastal Waterway became stuck in the open position.
Parishioners have still been finding their way to church, says Laquerre, but the road mess and bridge closure are presenting problems for others.
“Visitors are not finding us,” he says. “We count on their attendance.”
Even so, collections were up between 15% to 20% when compared to similar weeks in 2019, the year before the pandemic struck and the church was forced to close, Laquerre says.
St. Vincent did not have a parish festival in February 2021 because the vaccines were not widely available. This year’s has been rescheduled to April 29-May 1 because of the road construction.
“We will have more rides but not the indoor flea market,” Laquerre says. “We are also transitioning away from running our own food booths to providing food trucks. This provides more variety and helps reduce our need for volunteers.” 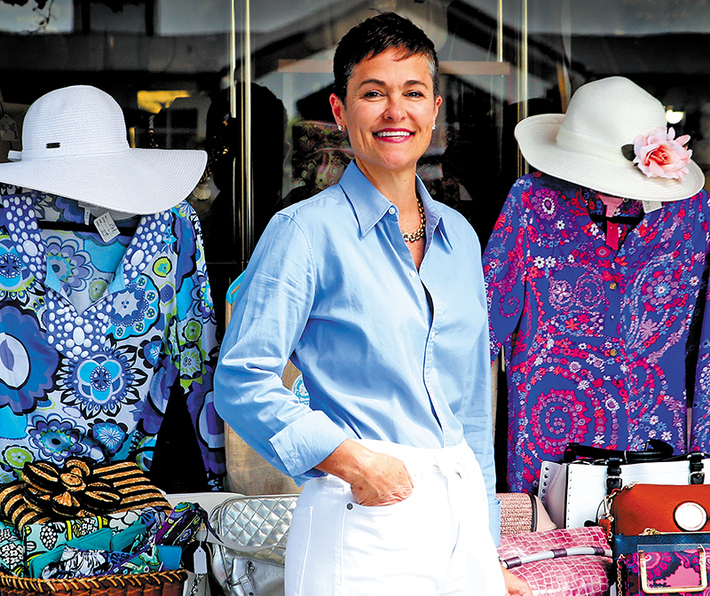 George Bush Boulevard construction work is “inconvenient … the price you pay for progress,” says Davis, owner of Second Time Around.
The roadwork, overseen by the Florida Department of Transportation, will add sidewalks to her block, making the street safer for walkers and bike riders.
But Davis says it hasn’t stopped sales at her upscale consignment shop, which features women’s clothing and accessories — including designer names — from going “through the roof.”
She credits pent-up demand for in-store shopping after the pandemic began to ease.
Her clients are not affected by the closed bridge, which broke March 3. They find her business by doing Google searches for consignment shops, she says.
Davis also sees more tourists visiting the area and more people moving to Delray Beach. “It’s no longer the sleepy village by the sea,” she says. 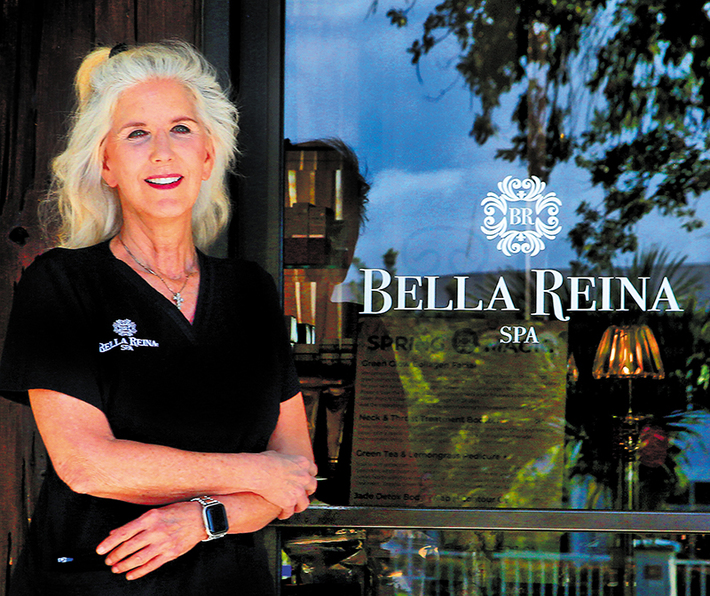 For Reagan and her spa, the closing of the George Bush Boulevard bridge has been something of a blessing in disguise.
Before the bridge got stuck in the up position, two-way traffic on George Bush Boulevard during roadway construction made it difficult for customers to navigate their way into the spa’s parking lot.
Now, with the bridge out and traffic coming only from the west, fewer cars mean customers have less congestion — and fewer headaches — to contend with.
“We’re really lucky the bridge didn’t break when it was in the down position,” Reagan says. Most of Bella Reina’s clients make appointments, so the staff has the opportunity to let them know that the bridge is out before they arrive.
“The bridge being out hasn’t hurt our business because we’re a destination,” she says.
“We’ve been very proactive in telling them how to get here,” Reagan adds, recommending barrier island clients use either the Woolbright Road bridge or the Linton Boulevard bridge and avoid the congestion of Atlantic Avenue.