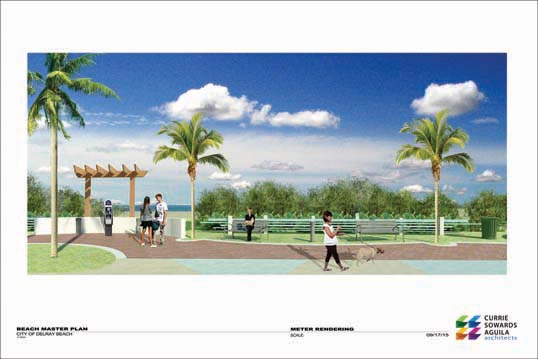 Wider sidewalks, more benches and open ocean vistas are among the proposed changes for the public beach in Delray Beach. Renderings by Currie Sowards and Aguila Architects

After waiting nearly seven years, the Beach Property Owners Association will soon see what $3 million of improvements look like for the public beach.

Plans call for color-coded sidewalks closer to Ocean Boulevard, a meandering path of pavers on the dune side, new stick showers with stools nearby, a stockade-style fence separating the dunes from the paver paths, strategically placed benches, perhaps an archway at Atlantic Avenue, stylish bike racks, multimodal parking meters that serve 10 spaces and other improvements.

Architect Bob Currie, who depicted the improvements in renderings, will get a cost for each item so that Delray Beach can do a request for proposals for a design-to-build project later this year.

“Tonight is the first day of the future of the Beach Master Plan,” said Bob Victorin, association president, to a Delray Beach Marriott ballroom filled with 100 attendees. The Marriott donated the room, the refreshments and the valet parking for the Sept. 17 meeting.

“They are a good neighbor,” Victorin said.

Cooper worked with the city’s Chief Financial Officer Jack Warner to secure $3 million for the first phase of the master plan. They would like to see construction start in April or May.

Katz presented a short history of his work that looked at the beach and what the city had in 2008. “Benches were helter-skelter, parts were overgrown,” he said.

“The public did not want large structures,” Katz said. “They didn’t see a need for a concession business.”

The ideas were assembled into a plan that was presented to the City Commission in 2010.

Commissioners supported the plan, but they did not have the money to do it. The association next went to the city’s Community Redevelopment Agency, but that board didn’t want to move its boundary east and cure “blight” at the beach.

Then last year, the association collected private donations to redo the pavilion. 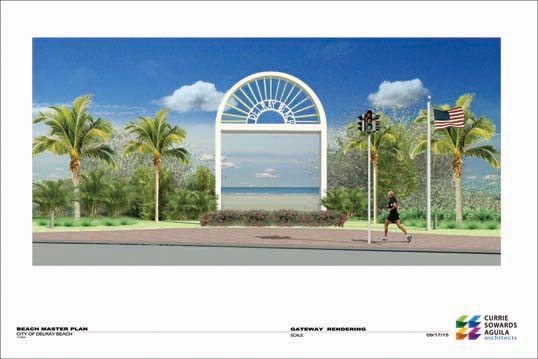 An arched feature with a retractable screen has been proposed at the end of Atlantic Avenue.

At the Sept. 17 meeting, Currie showed his gateway feature that would sit at the eastern end of Atlantic Avenue. During the day year-round, the screen would remain rolled up so that people approaching Ocean Boulevard from the west could see the ocean. At night, during sea turtle season, the screen would be rolled down to block the headlights and keep the light from disorienting the sea turtles.

But the Florida Fish and Wildlife Conservation Commission prefers a permanent solution to lighting fixtures, dune management consultant Rob Barron told the Marriott group. “They don’t want something mechanical that could fail,” he said.

“If you remove exotics and prune existing vegetation, you can do dune management and get a vista of the ocean as a result,” said Barron, who was the city’s chief lifeguard from 1980 to ’87. Delray Beach recently hired him to update its 1999 coastal management guidelines.