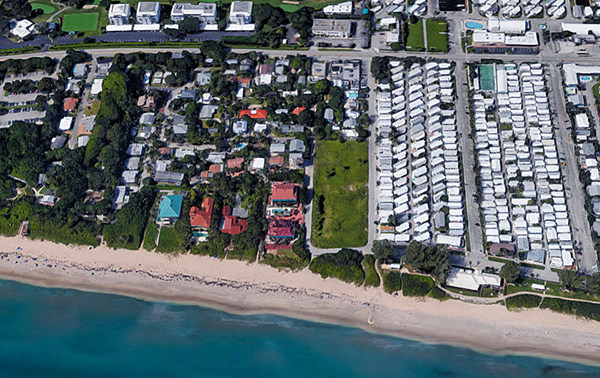 The nearly 2-acre parcel is on the edge of the County Pocket, across the street from Briny Breezes. The owners bought it for $3.2 million in 2006 and are asking $6.895 million. Google Map

The former Dog Beach property is on the market — again.
This time, it carries a $6.895 million price tag for one of the last remaining vacant parcels of oceanfront land in southern Palm Beach County.
Nearby property owners in Briny Breezes and the County Pocket likely saw the for-sale sign go up in mid-June. The nearly 2-acre site features 171 feet of oceanfront land. The property is zoned for eight units to the acre, but a postcard offering for the land said 36 units might be possible.
The owner received that information from the county, said broker Steven Presson of The Corcoran Group’s Palm Beach office.
“The broker got ahead of himself. That high figure is the ultimate the property would get with all of the variances,” said owner David Rinker. “The neighbors would never go for that.”
The property zoning allows eight units to the acre, but Rinker said 14 are more likely to fit. “We have had the property for a number of years,” he said. Rinker and partners bought the land for $3.2 million in March 2006 and planned to develop it, then the recession hit.
“I’m not crazy about it, but I knew the land would not sit empty forever,” said Mike Smollon, who lives in the pocket. “Oceanfront land is valuable.”         He said his area could see some improvements if that parcel were developed. “Maybe we would get sewers and paved roads,” he said.
James Arena, a Briny Breezes resident who has a real estate brokerage in Boynton Beach, predicted it would be a long approval process for the developer. That company may end up putting up “a big wall that is 8 feet tall around the project, which would affect the drainage in the area.”
He would like to see a park there “with space for golf-cart parking because so many residents have street-legal golf carts.” He suggests the county and Briny Breezes buy the 2 acres.
“It’s a big-time crapshoot for a developer to buy it before Briny sells,” Arena said.
Pocket resident Marie Chapman said, “Having it developed will help our area. But if it is not done properly, it would put us under water. We have lots of drainage problems.”
Homeowners on Winthrop Lane in the pocket see water reaching their doors after a heavy rain, said Don Brown, who lives on Streamaire Lane in the pocket.
The developer “will see a lot of resistance from neighbors if he tries to put 5 pounds into a small bag,” said Brown, who also owns the Southdale Properties real estate firm in Lake Worth.
“The property serves as a retention pond for the County Pocket,” Brown said. “But a property owner should not have to do that [solve the area’s drainage problems].”
Real estate broker Presson said he was receiving three or four calls a day about the property.
“Activity is definitely there from builder-developers,” he said. “Where else in Palm Beach County can you find 2 acres on the ocean for sale?”