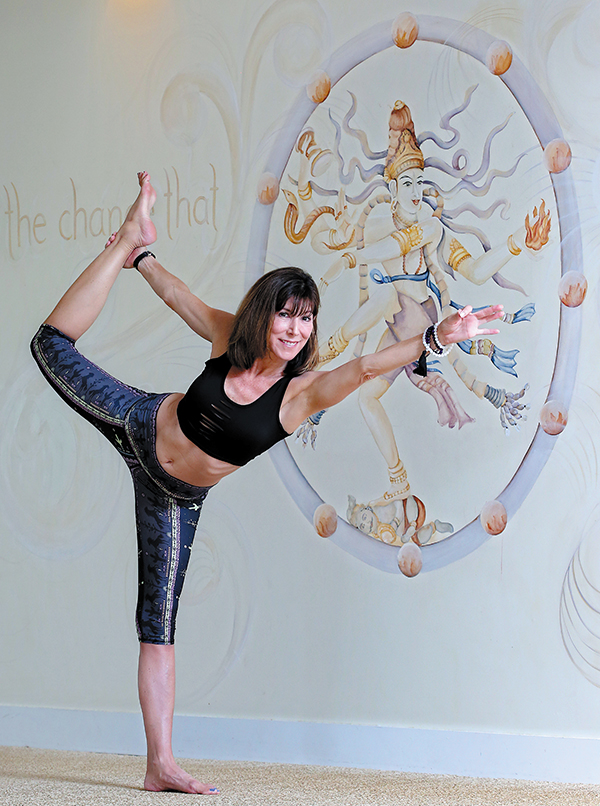 Lisa Rome Steiner practices yoga to help with her back pain. Here, she does the dancer’s pose under the eye of a Hindu deity. Tim Stepien/The Coastal Star

Were it not for severe back pain, Lisa Rome Steiner might never have discovered yoga.
Now a well-known instructor who leads 13 classes a week as well as yoga fundraisers for local nonprofits, Rome Steiner remembers when she was in constant pain as the result of four herniated disks that came after three decades of running.
Fearful of surgery, Rome Steiner took the advice of a friend who suggested she give yoga a chance.
“I went in trying to heal my back and then I came to realize the emotional and spiritual benefits,” she said. “The nice part of yoga is that these benefits sneak in.”
After going to yoga classes for 10 years, much of that while working in a leadership role for a financially focused magazine, Rome Steiner, 53, quit her job and, a few years later, began leading yoga classes.
Certified to teach for the last three years, Rome Steiner trained under Jimmy Barkan, creator of the Barkan method of hot yoga, which is taught around the world.
In addition to teaching regularly scheduled classes, Rome Steiner leads yoga fundraisers and this month will help to recognize national Mental Health Awareness Month by hosting an event benefiting Boca Raton’s Faulk Center for Counseling.
Set for May 20 at the Barkan Method of Boca Raton, the event includes a yoga class, as well as vendors. There is a $25 fee with all proceeds going to the Faulk Center.
For Rome Steiner, supporting nonprofit organizations ties in well with yoga and specifically with the Faulk Center, which provides free and low-cost mental health services to children and families.
“Yoga is a tool that helps Faulk Center clients and others to better handle stress, anxiety and life’s challenges,” she said.
Over the past three years, Rome Steiner has helped raise more than $12,000 for the Alzheimer’s Association, Hope Gel Foundation, Girl Up and Best Foot Forward.
“Helping others gives you a feeling that’s better than money,” she said. “It’s a feeling of having the chance to make people a little happier, and that makes the world a better place.”
Rome Steiner, who is from a small town in western Massachusetts, graduated from the Wharton School at the University of Pennsylvania and landed a job with a British bank as a financial analyst specializing in utilities.
Following a chance meeting on a train, she was offered a job by the publisher of Institutional Investor magazine and soon began a 21-year career in the publishing industry. During that time, she and her husband, Barry, settled in Boca Raton, raising two boys who are now in college.
“It’s weird that I became a yoga teacher because I was always very goal-oriented,” she said.
One of the students in the Boca Raton class Rome Steiner teaches happened to be Vicki Katz, CEO of the Faulk Center, who knew about the fundraising events her instructor hosted.
“Lisa’s a great teacher and she’s been very supportive of her friends in the nonprofit world,” Katz said.
Recognizing the connection between yoga and the center’s mission, Katz asked Rome Steiner if she would host a fundraiser in May during Mental Health Awareness Month.
“The whole practice of yoga is very much a part of mental health and wellness,” Katz said.
Besides raising money, the May 20 event will help raise awareness for the Faulk Center and the mental health programs it provides.
The center will also bring attention to mental health programs in the community during a butterfly release set for 5:30 p.m. May 17 at the Faulk Center for Counseling, 22455 Boca Rio Road, Boca Raton. There is no charge for the event but donations are appreciated.

For more information on the Faulk Center, call 483-5300 or visit www.faulkcenterforcounseling.org.