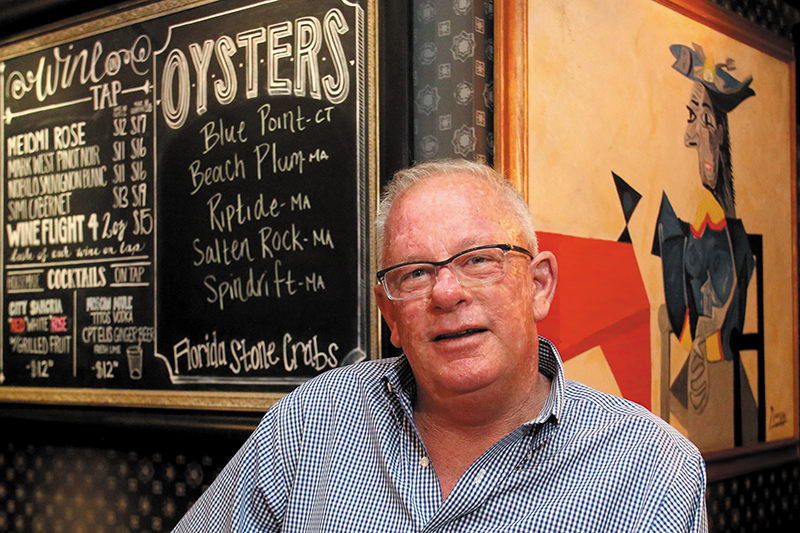 Bill Watson and his partners in the Big Time Restaurant Group understand what Delray Beach’s Crossroads Club means to the community.
They also understand what it means to chef and restaurateur Louie Bossi, whose restaurants are operated in partnership with the West Palm Beach-based group.
So, when Bossi came up with a fundraising idea for the Crossroads Club, a 7,200-square-foot facility that hosts dozens of meetings every week for organizations such as Alcoholics Anonymous, Narcotics Anonymous and Overeaters Anonymous, his partners were happy to lend a hand.
“Louie brought the idea to the team and we said ‘of course,’” said Watson, a founder and an owner of the Big Time Restaurant Group. He recently moved to Ocean Ridge. “We know it’s important to him and we knew it was important to the community.”
That conversation three years ago led to the creation of the Taste of Recovery, a culinary event in Delray Beach’s Old School Square with Bossi as an organizer and host. The event was so successful in raising money for Crossroads in its first two years that organizers have decided to do it again on June 1.
As it has in the past, Big Time Restaurant Group will be involved and so will Watson.
“If Bill sees a worthy cause, he’s 100 percent supportive of it and he gets people to join him,” says Tony Allerton, the longtime executive director of Crossroads. “Bill is dedicated to helping us.”
Chances are you’re not familiar with Watson’s name, even if you’re a regular at local restaurants. You might not have even heard of Big Time Restaurant Group.
If you’re in South Florida, however, you probably have been in one of the group’s multiple eateries, include Rocco’s Tacos & Tequila Bar, Louie Bossi’s, City Oyster & Sushi Bar, Big City Tavern and City Cellar Wine Bar & Grill.
Watson, who owns the restaurant chain with Todd Herbst and Lisabet Summa, is low-key and unassuming. He is easy to talk to — traits that helped him during his years as a server and bartender — and he has a firm grasp of the intricacies of the restaurant business.
From Long Island, Watson, 54, started out in the hospitality industry at 15, working as a pot-washer before becoming a busboy and eventually graduating to waiter and bartender.
After moving to Florida more than a quarter century ago, Watson earned a degree in business from Florida Atlantic University, all the while continuing to work in restaurants.
“Florida afforded me the opportunity to go to school and work at the same time so I could pay for school,” he said.
After graduating and finding restaurant jobs around the country, Watson returned to South Florida. He connected with Herbst — a childhood friend — and opened a first restaurant, John Bull English Pub in West Palm Beach. After meeting up with Summa, they formed Big Time Restaurant Group and opened Big City Tavern in downtown West Palm Beach.
Watson and his team now operate more than a dozen restaurants. He attributes their success to having employees who help create a culture focused on providing a quality experience for the customers.
“We have a fantastic group of people who allow us to do this,” he said. “It’s a great team and that’s the key to our success.”
As it has done with the Crossroads Club, Big Time Restaurant Group supports other nonprofit organizations that are important to the staff.
When one of the longtime team members discovered that a relative had juvenile diabetes, Big Time Restaurant Group stepped in with support.
The group also supports Rocco Mangel of Rocco’s Tacos, who was diagnosed with multiple sclerosis, when he participates in related fundraisers.
“We support many causes, we just happen to focus a little more when it hits close to home,” Watson said.
For Watson, the Taste of Recovery is a great event that will feature several of the group’s restaurants — along with several other restaurants — as they provide savory food and compete for prizes such as the People’s Choice award and Critics Choice award.
“It’s a lot of fun and we see a lot of people from the industry,” he said.
Agreeing three years ago to support Bossi’s idea for Taste of Recovery was an easy decision for Watson and the ownership team.
“If you have the capacity to help with a problem, you just do it,” he said.