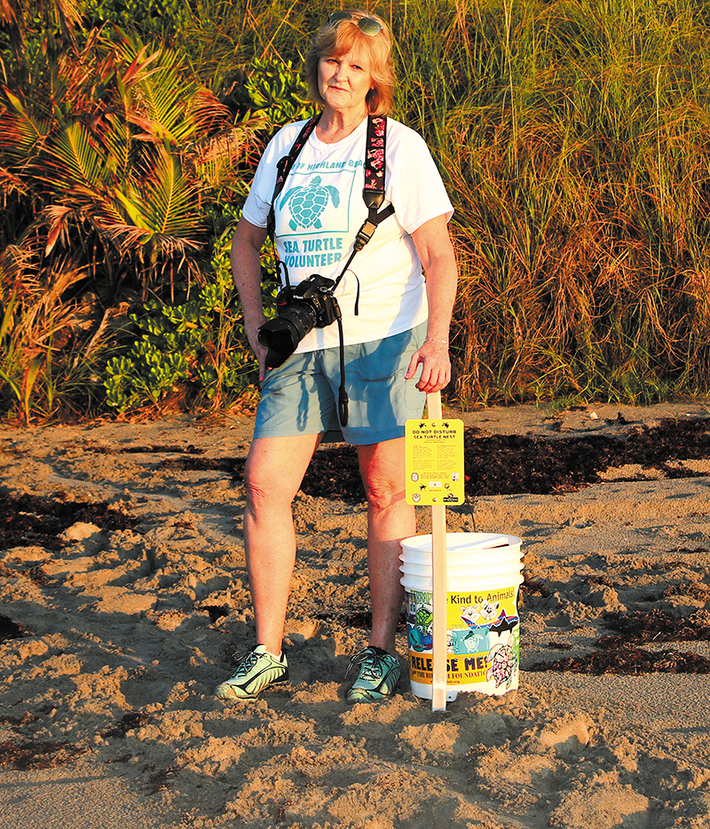 Joanne Ryan stands on the fresh tracks of a loggerhead in Highland Beach. Ryan manages the collecting of sea turtle nesting data and is an avid photographer. Tim Stepien/The Coastal Star

Even before sipping her first predawn coffee each day, Joanne Ryan is already compiling data on her team’s counting of sea turtle nests and hatchling rescue efforts and sending it off to the Florida Fish and Wildlife Conservation Commission.
As the Highland Beach permit holder and principal officer for the FWC for the past year, Ryan is in charge of the sea turtle program along the town’s 3-mile stretch of beach, coordinating volunteers and overseeing the day-to-day operations.
“I decided to step up when Barbara James, the previous permit holder, stepped down after 15 years,” says Ryan, a Delray Beach resident who works full-time as a portfolio accountant for a property management company. “It’s a bit of a challenge — you need to get up early, rain or shine — but so rewarding once you do.”
Ryan says that Highland Beach “is very turtle friendly. The residents are very receptive and helpful. If we report a lighting issue, it gets handled. I’m proud and happy to have access to the beach and work as guardians for these threatened and endangered sea turtles.”
Almost 70% of the nation’s sea turtles nest on Florida’s beaches. These volunteers try to help the one out of 1,000 hatchlings that makes it to adulthood and returns to the beach to lay eggs.
The eggs incubate for 60 days and when they hatch, volunteers can aim hatchlings toward the ocean if they get disoriented.
Between March 1 and Oct. 31, Ryan and her team rope off the nesting areas of sea turtles; document the crawls and whether or not they result in nests; record the hatches; inventory the number of nests; track the progress of the turtle population and whether it’s declining, and so on.
One of Ryan’s goals for the group is to incorporate as a 501(c)(3) nonprofit.
A photographer and boater, Ryan, 64, was always interested in nature and the outdoors, where she enjoys time with her husband, Steve, a carpenter and volunteer with the Coast Guard.
In high school she dreamed of becoming a National Geographic photographer before being persuaded by her parents to look toward business.
She grew up in Yaphank on Long Island, where her grandparents were potato farmers, and she was a member of the Long Island Beach Buggy Association. Along with her cousin, she spent many summer nights camped out on the beach.
It was her cousin who first put a camera into her hands.
To this day, Ryan brings her camera to the beach, where she photographs the turtles, the sunrise, the ocean and other wildlife. She hopes one day to sell some of her images.
“When I explain our conservation efforts to people, they say to me, ‘You’re very passionate,’” Ryan says. “I’m passionate about preserving our environment, ridding the oceans and beaches of plastic and making a difference through education and raising awareness.”
Gardening is another of Ryan’s passions. A certified Florida master naturalist through the University of Florida’s master gardener program, Ryan learned from naturalist Steve Bass, former director of Gumbo Limbo Nature Center.
She also admires Melissa Groo, a wildlife photographer and conservationist who combines her photos with stories to raise awareness about the natural world and the species that inhabit it.
Ryan first met her husband after an evening softball game, at the raw bar Dirty Moe’s Oyster Boat in Boca Raton. They had rock shrimp and beer back when a pitcher of beer was $3.95, and a glass of wine could be had for $1.75.
Dirty Moe’s is gone, but the couple, now married 33 years, have two rescue cats, Storm Serge (named after a character in the Tim Dorsey mystery books and because he followed them home like a “storm surge”) and Lucy (named after “Lucy the Leatherback Turtle”). The couple are without a dog for the first time in 30 years.
James, who held the Highland Beach permit for 17 years and worked with Ryan for 12 of them, says, “Joanne’s commitment to nature and the environment is a win-win for the future of the all-volunteer sea turtle data collecting group.”
What drives Ryan in her volunteerism is the conviction that she’s making a difference.
“It can be a struggle to get out of bed at 5 a.m., even on a good day,” she says, “but once you’re out and hit the sand and beach and see the sky and water, it’s beautiful. I consider it an honor to do this work.”
She quotes an old volunteer adage, “Volunteers don’t get paid because they’re worthless, but because they’re priceless.”