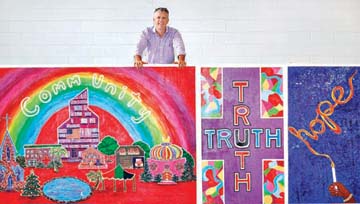 Bobby Julien, CEO of the Kolter Group, is a driving force behind fundraising efforts

for the Achievement Centers in Delray Beach.

For Bobby Julien, what started out as casual dinner conversation with a friend has evolved into a passion-filled commitment that is making a positive impact on the lives of thousands of area children and their families.
Julien, chief executive officer of the Kolter Group — a diversified real estate development and investment firm based in West Palm Beach — was with his friend Tom Murphy, who mentioned his involvement with the Achievement Centers for Children and Families in Delray Beach.
Julien, Murphy suggested, should consider getting involved.
“He brought the idea up at dinner and sold it hard,” said Julien, who lived in the Delray Beach area for several years and now lives in Gulf Stream with his wife and three children. “He arranged a tour, and when I went there and saw what they did, that was it. I was hooked.”
What Julien saw was a great program he knew instantly he wanted to be a part of.
The Achievement Centers serves more than 1,000 children and their families, providing affordable childcare as well as effective after-school and summer programs.
The new 2015 president of the operational board of directors, Julien, 47, worked his way up in the organization’s volunteer leadership structure, first joining the board of the Achievement Centers Foundation in 2009. He served three years as board president of the foundation — the nonprofit wing of the organization — and last year joined the operational board.
“When we got established in this area, I wanted to get involved with an organization that helps children,” he said. “There’s such a need and I thought there has to be a way to make an impact.”
Julien’s business background and expertise proved valuable to the organization as it went through a leadership transition in 2013 following the retirement of longtime director Nancy Hurd and the hiring of Stephanie Seibel, who had been executive director of the foundation, as the new CEO.
During his time as foundation board president, Julien worked closely with the foundation’s new executive director, Abigail Goodwin, with a focus on helping expand the organization’s visibility.
“Our goal was to raise awareness of the Achievement Centers to help expand the base of donors,” he said. “We worked super hard on raising awareness through events and through being more visible in the community.”
As part of the effort, the foundation board agreed to expand the team’s staff to four members.
With his team at Kolter — which develops residential and commercial properties, including hotels — Julien has been a driving force behind one of the most successful fundraisers for the centers, the Havana Nights event.
This high-end poker tournament, held in the Cathedral Room at the Boca Raton Resort and Club, raised $300,000 in its inaugural year of 2012, and last year raised $570,000 — with all of the proceeds going to the Achievement Centers and seven other nonprofits.
The Kolter team obtains most of the sponsorships — which range from $5,000 to $25,000 — largely from its vendors, and underwrites all the costs associated with the tournament, Julien said.
“Under Bobby’s direction and commitment, Havana Nights has made a name for itself as one of the most successful charitable poker tournaments in the state, benefiting eight charities,” said Seibel, the Achievement Centers’ CEO.
In his new role as president of the operational board, Julien is now focused on helping the Achievement Centers continue to expand the services it provides to the community. The organization is also exploring ways to provide programs for children beyond the age groups it currently serves.
“Bobby has a genuine interest in creating opportunities that lead young people to improve their futures,” Seibel said. “Moving to the operational board as the new president, his strong leadership will continue to guide the board’s vision for the future of the agency.”
For Julien, the Achievement Centers for Children and Families has become a focus of his efforts to support the community.
“I’m very fortunate I’m successful and I can help others,” he said.

If You Go
What: The Achievement Centers for Children and Families 14th annual Delray Beach Home Tour in the southern beach area of Delray Beach. Guests will enjoy a leisurely day of exploring unique residents, a catered luncheon and trolley service between homes.
When: 10 a.m.-4 p.m. March 12
Tickets: $100 (a portion is tax deductible.) Information:  266-0003, Ext. 16