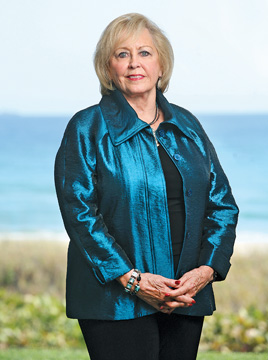 After Hurricane David blew into Palm Beach County in 1979 — just in time to ruin Labor Day weekend and collapse the jai alai fronton — Marliss Hadeed and her then-husband, John Sudbay, drove north from their home in Pompano Beach to check out the damage for themselves.

They never made it to Palm Beach that day, but it had nothing to do with the weather. On their drive up A1A, they saw a construction trailer for a seaside condo called Beach Walk East in Highland Beach. The pre-construction plans so impressed them, they bought a condo on the spot.

In 1981, when they moved into the condo, the couple had the entire building to themselves for several months, Hadeed said. Highland Beach has been her home ever since.

She has forged many friendships in the town over the years. One of those friends invited her to become a member of the University Club, a branch of Florida Atlantic University’s Foundation devoted to helping the university’s library and raising money for scholarships.

“My friend moved away, but I’m still here,” Hadeed said. In fact, she is the organization’s president. Her term will end in April, but she will stay on as a board member.

“We’re a friendly group,” Hadeed said, sitting at her kitchen table. From there, she has a postcard pretty view of a handful of kite surfers gliding across the waves outside. Occasionally, Hadeed hosts soirees at the condo for members of the University Club. The organization has about 100 members; a fourth of them are board members, too.

Started by eight women in 1976, the University Club has raised about $1 million over the years for the FAU library and for many scholarships. Money is raised during annual fundraisers, dinner theaters, brunches and silent auctions.

“It’s open to anybody who might like to join,” Hadeed said. “It’s a fine organization and we’re all friends.”

Most of the money raised by the University Club goes to the library, she said, but over the years the group began to fund small scholarships, as well.

“We try to give $1,000 need scholarships,” Hadeed explained. “In this economy we can’t afford four-year scholarships.”

While not an alumna of FAU, Hadeed’s granddaughter is studying exercise science there. Sometimes she comes over to dinner with friends giving her grandfather, who has Lebanese roots, a chance to show off his Middle Eastern cooking skills.

Born and reared on a farm in northern Iowa, Hadeed was the only girl in her family. Having four brothers had it advantages, she said. She didn’t have to do many chores.

“I was a tomboy,” she said. “My father didn’t want me to play basketball at school because he thought it was a boy’s sport, but I played anyway and he came to all the games.”

She married her high school sweetheart, Lyle Hacker. After he died at age 33 in a canoeing accident, she worked as a travel agent to support their three children.

Her second husband, John Sudbay, a general agent for the Mutual of Omaha, brought her to Florida, and eventually to Highland Beach. After Sudbay died, she married Vic Hadeed, a friend of the couple and a neighbor at Beach Walk East. All of them have been active on the condo board. Vic Hadeed is current treasurer of the condo board.

The Hadeeds enjoy traveling, especially cruising, and have been on just about every cruise line, and ships from the QE2 to the Oasis. “Cruising is an easy way to travel,” she said. “We go at least once a year.”

Although she claims not to be able to sketch at all, Hadeed taught herself to paint years ago and has several examples of her artwork around her condo. Her subjects are orchids and daises, seascapes and landscapes.

While she hasn’t been inspired to pick up a brush lately — frankly, she hasn’t had time between meetings, social functions, keeping up with family, and travel — she hopes to get back to it one day soon.

She does enjoy bridge and plays three times a week at the Delray Beach Club.

“I’m busier now than when I worked full-time,” Hadeed    laughs.

For more information about the University Club, call Laura Kraft at 297-3575 or e-mail lkraft3@fau.edu.