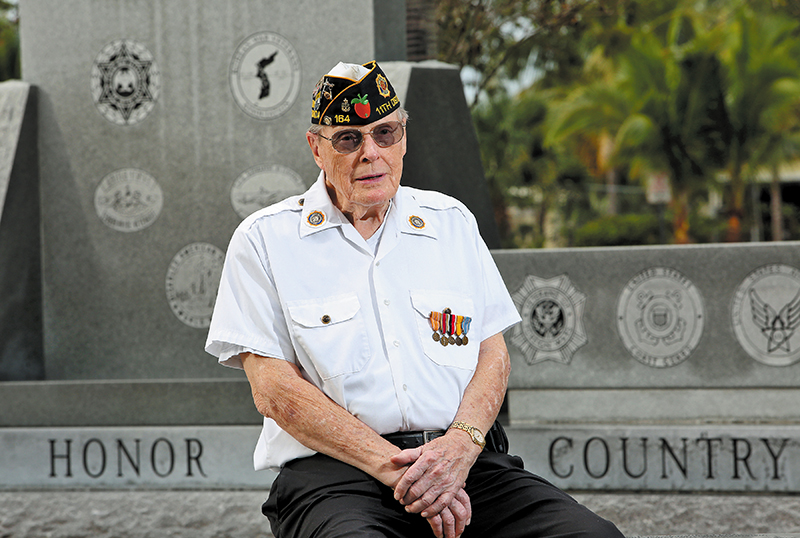 In a tribute to the time, effort and money that Tom Kaiser has invested in the park, it is now the Tom Kaiser, USN, Boynton Beach Veterans Memorial Park. Tim Stepien/The Coastal Star

Tom Kaiser’s handprints are all over the Boynton Beach Veterans Memorial Park. The park was his idea and he began working on it in 2008. He raised money through fundraisers and by selling recognition bricks, worked with the city to secure property and hold event and has helped design and approve almost every piece of granite and every written word on the 25 monuments and 12 benches in the park.
He has even purchased or helped buy some of the monuments.
This year, a new monument will be added with a new name for the park — the Tom Kaiser, USN, Boynton Beach Veterans Memorial Park.
“I know every blade of grass in this place,” said the 91-year-old Kaiser, a WW II Navy veteran. “I love every one of the monuments and benches.”
Kaiser and Stan Gavlick, an 88-year-old Korean War Navy veteran, have been the driving forces behind this park, which is a tribute to all who have protected, fought for and died for the United States.
“Stanley is the co-chairman, finance officer and brains of the unit,” Kaiser said. “He deserves as much credit as I do.”
Gavlick said it’s been a labor of love. “Tom is so generous. Sometimes he would pay for the monuments himself.”
State Rep. Joe Casello, was the first to suggest the renaming of the park at 411 N. Federal Highway when he made a proposal to City Manager Lori LaVerriere in May 2019.
“He thought some of the guys on the City Council would OK this proposal,” Kaiser said. “But we ran into some opposition. It took three commission meetings before it was resolved.”
The first monuments went up in 2008, but there were some bumps along the way. When the city put up a flagpole, it was in the wrong place — in the middle, right in front of the large monument.
“You couldn’t take a picture without the flagpole being in the middle of the picture,” Kaiser said.
“It must have been about seven years ago,” LaVerriere said. “I went to meet Tom at the park, and I started looking at this flagpole and it is right in the middle of everything and I said ‘what is up with that?’ … I said ‘OK, we are not talking rocket science here, so let’s move the flagpole.’ It was a no-brainer to me.”
Two weeks later the flagpole was moved.
The two co-founders say the park is complete now.
“No more monuments are planned,” Kaiser said. “There is no room. The last one was the Purple Heart monument.”
The monuments include tributes to all of the branches of the armed forces, famous battles and groups that distinguished themselves. And for every granite monument, Kaiser has a story to tell.
A pigeon figure is perched atop the Lost Battalion monument, and Kaiser knows the history.
“Carrier pigeons were the most reliable means of communications during the First World War,” he said. “About 500 of our guys were surrounded and pinned down by the enemy and every pigeon we sent was shot down until the last one. Well the last one (named Cher Ami) also got shot down. He took one to the leg, one through the side and he was blinded in one eye. He hit the ground then got up and flew 30 miles to its cage to tell them that our guys were still alive. That pigeon saved a lot of our guys.”
Another monument is a testimony to the USS Trout, a submarine that went missing in 1944 with 81 sailors aboard, including Kaiser’s brother, Robert.
Other monuments include testimonials to Pearl Harbor, Gold Star mothers, the Night Stalkers (the team that was responsible for killing Osama bin Laden), Vietnam vets, African-American vets, the unknown soldiers and the Missiles of October 1962.
Every monument has been made by Lake Worth Monument, and Kaiser and Gavlick are quick to credit that company. “Through all these years, they never raised their prices,” Gavlick said. “We would still be building this park if they had.”
“We did all of those monuments (24 of them) at cost besides the (40-ton) centerpiece,” said Fred Menor, owner of the company. “I made money on the big monument but over the years I have taken them under my wing. I love to help veterans, it’s truly an honor.”
The new monument with the updated name of the park will be installed in early 2020 and replace the existing yellow sign with the heading of Recreation and Parks Department.
On each side of the monument will be a smaller plaque, one recognizing former Boynton Beach Mayor Jerry Taylor and late Vice Mayor Robert Ensler. The other will be a tribute to Gavlick.
“These are all my children,” Kaiser said of the monuments. “We raised each one of these kids. Stanley feels the same way.”