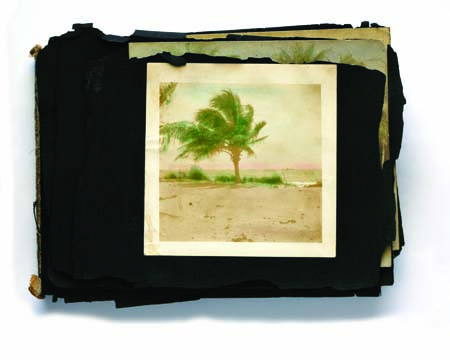 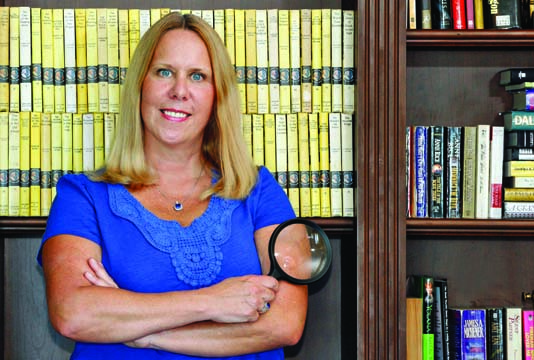 Researcher Janet DeVries channels her inner Nancy Drew to unearth the roots of a photo collection that portrays a Florida lost to time. Photos by Tim Stepien/The Coastal Star

In her search to learn the provenance of a century-old photo album, Janet DeVries uncovered stories of shipwrecks, sailors, suicide and a whole lot of coconut palm trees.
DeVries — a historical researcher, author and president of the Boynton Beach Historical Society — calls her latest project “Clues in the Crumbling Album,” a takeoff of an old Nancy Drew title.
Indeed, she found several clues on the fragile pages of the old photo book she discovered on eBay. The photographs were taken between Palm Beach and the Hillsboro Inlet and most were shot in Manalapan.
“Since the images were most interesting, I hoped to learn more about the provenance,” she said. “The album is truly a gem and seems to be one of the earliest and most compelling illustrative accounts of coastal central Palm Beach County. The images portray a Florida lost to time and development and provide a glimpse into the flora and fauna of coastal Palm Beach County pre-1926 and 1928 hurricanes.”
The book came to her wrapped in tissue.
“It is literally falling apart,” she said. Each time she turns a page to look at a picture, paper fragments fall into her hand. She already has scanned each photo for preservation.
Texas archaeologist Bob Wishoff, who grew up in Florida and sold the album to DeVries, found the photographs at an estate auction in Texas several years ago.
“I realized they were pretty historically relevant and I wanted to find out who the people were,” he said. “I didn’t think I would be able to find out myself and it was important to me to sell them to someone who would appreciate their value.” 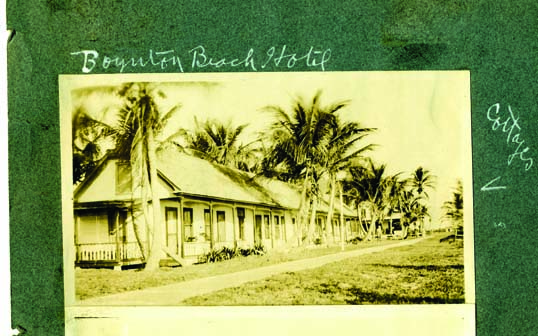 This photo is one of two known images of the old Boynton Beach Hotel cottages. Photos courtesy of Janet DeVries

What initially piqued DeVries’ interest in Wishoff’s find was an image of the old Boynton Beach Hotel. That photograph, which actually was of some cottages connected to the hotel, was part of another, smaller album. While talking with Wishoff about those pages, she learned of a larger “crumbling” album and another collection of old pictures taken in Florida and other states.
“The Boynton Beach Historical Society does not purchase artifacts,” she said. “The organization relies on donations. Occasionally, I purchase postcards and other ephemera with my own money to share with our (Historic Boynton Beach) Facebook fans. I like to think of it as ‘bringing these items home.’ ”
The purchase was a splurge for her ($150), but her friend and fellow researcher, Ginger Pederson, encouraged DeVries to buy the book as a birthday gift to herself.
“When the artifact was delivered and I touched the delicate paper, I could barely bring myself to open it,” DeVries said.
“What I found inside delighted and amazed me,” she said. “Not only does it illustrate the tropical beauty of coastal Palm Beach County prior to development, it portrays aviation pioneer Glenn Curtiss in Palm Beach with his seaplane. (He would come to Florida every winter and give those who could afford it plane rides to Cuba, Bimini or just for a short trip into the wild blue yonder). There also are references to President Theodore Roosevelt and World War I.”
By sharing images on Facebook, DeVries has been helped by viewers familiar with some of the locations portrayed. Eventually, she plans to donate the book to the Historical Society of Palm Beach County. 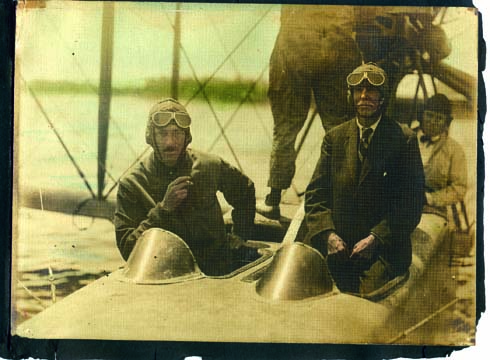 Aviation pioneer Glenn Curtiss would fly people to Bimini and beyond in his seaplane.

What the clues revealed
But who are the people in the pictures? Who were the crumbling album’s original owners?
DeVries, a researcher at Palm Beach State College who is working on a master’s degree in library science from Florida State University, called upon her sleuth skills to find answers.
“I’ve always liked solving mysteries,” she said. “I read all the Nancy Drew books growing up. I guess it’s in my blood, too, because my great-great-grandfather was the house detective for the biggest hotel in Cleveland in the 1880s.”
She has written five local history books.
In the course of her research, DeVries searched historical databases and land records and spent countless hours online. She made trips to the Palm Beach County Historical Society headquarters in West Palm Beach and tapped into community knowledge via Facebook.
Her initial clue was on the four pages of the first of three albums, she said. It included a photo labeled Boynton Beach Hotel Cottages.
“This piqued my interest,” she said, “because I’ve only seen one other image of the cottages at the Boynton Hotel in all my time as archivist for the city of Boynton Beach and as president of the Boynton Beach Historical Society and in all my research and collecting. The hotel was torn down in 1925, though some of the cottages remained.”
Other images labeled “Manalapan” followed by notations such as “walk to dock” and  “boat house” and “lake side view” led her to believe the home was located between the ocean and Lake Worth, which now is part of the Intracoastal Waterway.
A few images — labeled “Hillsboro Light,” “Canal to Delray” and “Dinner Stop at Lake Worth” — convinced her these were local images and that the people in the pictures lived here.
The names appearing on the pages were unusual — Madeleine, Romey and Leila, DeVries said.
“This combined with the term Manalapan cemented the deal that the family was the Piersons, and the home pictured within the crumbling albums was the 1894 structure built by Elnathan T. Field of Manalapan, N.J.”
She noted pictures of a coconut grove and read about pioneer George Charter (one of the barefoot mailmen) planting the coconuts.
“The story really became enchanting,” she said. The Pierson family bought this house north of Boynton Inlet in Manalapan in 1912. It was torn down by developers in 2000.

“Some of the images were mystifying,” DeVries said, “especially the one of the house with what appeared to be a cistern.
“Fans of our Facebook page, Historic Boynton Beach, provided additional clues as I posted images. Several people said the water tower in the picture was along A1A north of the inlet. This confirmed what I already suspected. With each photo I posted, more fans chimed in with memories of the old A1A (mostly washed out in 1947) and even the stretch of the beach that is north of the Boynton Inlet.”
DeVries tracked down the entire line of Pierson descendants, including granddaughter Nancy Pierson Sands Tilton, who died around 2000. There is a great-grandson living in Texas. 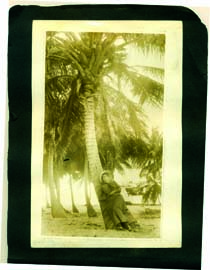 A woman, likely Leila Pierson, leans against a coconut palm in this photograph from the album Janet DeVries purchased.

Shipwrecks, sailors
and suicide
The Piersons, of New York and New Jersey, bought the house at 1780 S. Ocean Ave. in Manalapan in 1912, according to a 1933 story in which Leila Pierson was interviewed in The Palm Beach Post.
There were two known owners before them. One of them was George Charter, a barefoot mailman. He and his brother built a hunting shack on the property, then 126 acres along 2 1/2 miles of ocean ridge in what now is Manalapan), with timber — the remains of a shipwreck — they scavenged on the beach.
“Charter planted all those (several thousand) coconuts after the wreck of the Providencia,” DeVries said. 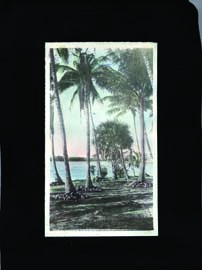 Palms were planted from coconuts that spilled from the wreck of the Providencia.

But besides coconuts, the bodies of two sailors washed ashore from the wreck. The Charters buried them beside the sea, according to Leila Pierson’s account.
Between Charter and the Piersons, the property belonged to Elnathan T. Field, who built the house on a bluff 15-25 feet above the ocean. Field came from Manalapan, N.J., and named the house on stilts “Manalapan Cottage” after a New Jersey Indian tribe. Manalapan is an Indian word for “pleasant waters.”
The Piersons weren’t immune to tragedy.
“A. Romeyn Pierson Sr. and his daughter, Dorothy, both died of the deadly 1918-19 fever,” DeVries found. “And the son, A. Romeyn Pierson, died of alcoholism in 1929.” The Piersons left the property to their granddaughter, Nancy Tilton, who sold it off gradually. In 2000, after Tilton’s death, a developer razed the house.
But while Mrs. Tilton was still living in the house, one of her houseguests made headlines when, in 1977, he killed himself with a 20-gauge shotgun. The man, a Russian-born French teacher, was an associate of Lee Harvey Oswald and a crucial witness in the congressional investigation of the assassination of President John F. Kennedy. 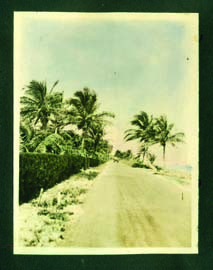 State Road A1A ran directly along the beach in the early part of the 20th century. It mostly washed out in 1947.

Every picture tells a story
“The discovery of this old album was a little like paradise found for me,” DeVries said. “I encourage people to keep or donate old photos rather than tossing them. Every picture tells a story.”
DeVries, a newlywed who lives in Lantana, is still uncovering stories. That’s what happens when you’re a historical researcher, after all. The more you dig, the more you find.
In this case, she found a historical treasure. ;
To reach DeVries, email boyntonhistory@gmail.com. Her history blog is found at www.boyntonhistory.org/author/jdevries/.