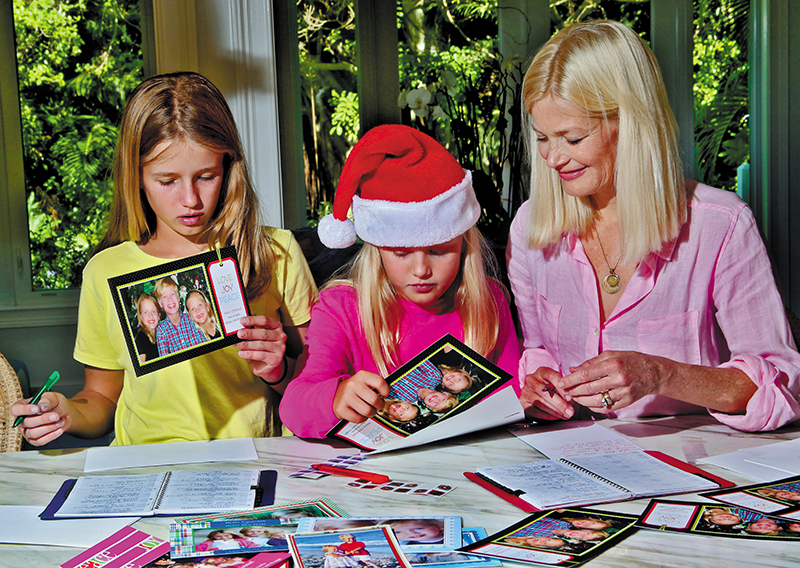 Adele Bulger of Ocean Ridge prepares Christmas cards with her daughters, Heidi, 14, and Maggie, 10. The Bulgers like to send family photo cards, and these include son George, 17. Tim Stepien/The Coastal Star

For Adele Bulger, sending and receiving Christmas cards is a time-honored tradition and one she isn’t likely to give up. The Ocean Ridge wife and mother of three typically begins penning her holiday greetings after Thanksgiving and admits it’s sometimes a bit of a struggle to get all 150 of them out before Christmas. She includes notes in many cards, longer handwritten letters in some, and others go in the mail with just a signature.

The Bulgers string up the cards they receive each year. “Everyone who comes into our home over the holidays looks at them and comments on them,” she said.

Sending out greeting cards for the December holiday is a tradition that originated in England in 1843, when Sir Henry Cole, a civil servant, began selling Christmas cards, unheard of at the time. The practice of exchanging Christmas cards grew quickly and spread to the United States by 1875.

Text messaging, email and social media have emerged to give cards a run for their money, and concerns that paper cards may not be planet-friendly have made an impact, too. But the tradition has found favor with enough folks to keep it alive.

At Hand’s Office and Art Supply on Atlantic Avenue, in business since 1934, sales of Christmas cards have remained consistently high, according to general manager Roz Castle.

“They’re buying 100 at a time with their name printed on it and return addresses,” she said. “They come every year.”

But card sales have gone down drastically at some stores like Salutations, a 20-year-old gift and card shop in The Colony Hotel, also on Atlantic Avenue. Bulger buys her cards there and said supporting local businesses is important to her.

Diana Bush, whose family has owned Salutations since 2004, said that while her sales of small gifts have continued to grow, holiday card sales have declined greatly.

“People still do come in and buy boxed cards, but not anything like they used to,” Bush said. “We used to have people line up in August for them, but now if I do 10 (custom orders), I’m happy.”

Some people have stopped sending cards, Bush said, and many customers prefer photo cards (as do the Bulgers). “But many tend to order them online. They think they can do so much better online, but actually they can end up spending more.”

Like Adele Bulger, Palm Beacher Jason Arbuckle enjoys sending holiday cards — it’s one of the reasons he started his company, J.Falkner Cards, in 2011. J.Falkner cards are sold throughout the country. 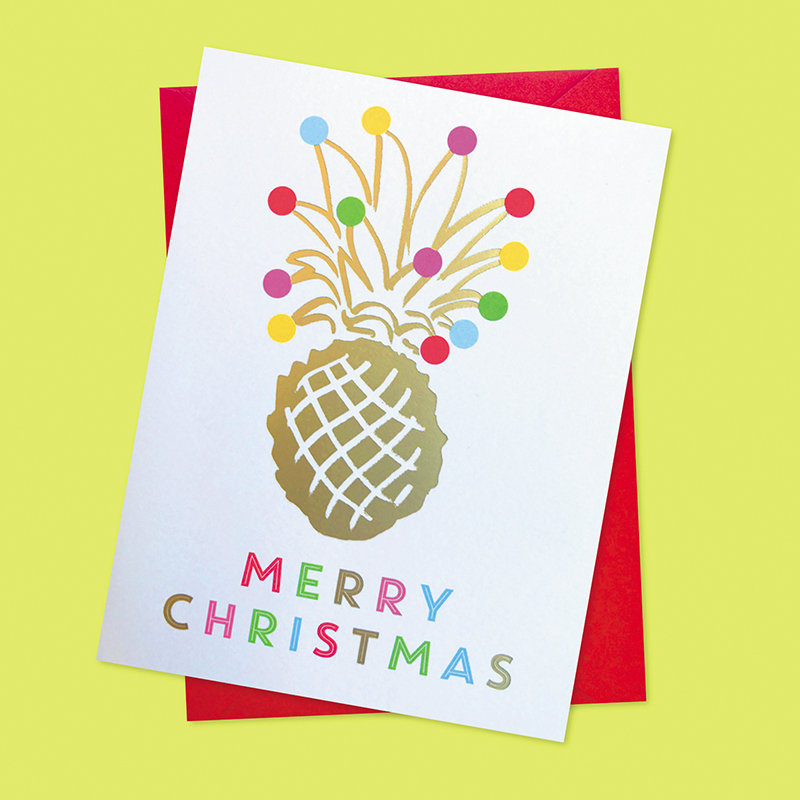 “Come Christmas time, I sit myself down with stamps, address book, a favorite pen, a nice glass of red wine,” he said. “I generally get around 75 cards into the mail.”

This, he admits, may require a second glass.

“It’s the way I press pause during all the holiday frenzy and take a moment to appreciate the good fortune and great friendships of the year that’s just gone by.”

The market for cards has been changing, Arbuckle said.

“Everyone’s lives are getting faster, it seems, so that chance to sit down and send a card to everyone on your list is harder to find. And yet, because of Instagram, more than ever people want to create a beautiful holiday experience to post and share — and Christmas cards are a key part of that.”

The changes have made the card market even more interesting, Arbuckle said.

“While the conventional wisdom is that millennials don’t have time for old-fashioned things like cards, in fact the young audience has helped the card industry prosper,” he said. “While millennials might not buy boxes of Christmas cards to send to all their friends, they like to find single cards that are really special — and worth reposting on Instagram.”

Because his company is based in Palm Beach, “we like to bring a fresh, sunny twist to the season,” Arbuckle said. “Just because it’s winter doesn’t mean we need to give up our bright colors and tropical motifs. Our colors for Christmas are bright and fresh, and palm trees and pineapples get the holiday treatment. These designs really connect with our base here in South Florida.”

The pineapples are new, and J.Falkner is producing some of its best designs in a different format this year — as deluxe holiday matchboxes. “These have been a huge success,” Arbuckle said. “They make a table look immediately festive and are great little gifts.”

For the Bulgers and others, the festive tradition of exchanging cards continues from generation to generation.

“My grandmother, God bless, she died when she was 96 and she sent them out until the year she died,” Adele Bulger said. “My mother addresses her cards the day after Christmas so all she needs to do in November and December is add in the notes.”

Time will tell if Bulger’s children continue the tradition. The kids helped their mom stuff cards in envelopes this year — which could mean an extra candy cane in their stockings.

J.Falkner Cards: Headquarters are in Palm Beach and the design center is in West Palm Beach, but to find a store near you, see www.jfalkner.com. Salutations carries the cards, as do The Breakers, Four Seasons and Eau Palm Beach.