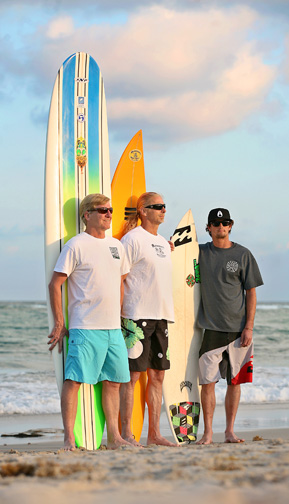 In March 1968, a ragtag band of local surfers rode a wave of anti-surfing sentiment all the way to Florida’s Supreme Court, and changed the history of their sport in Palm Beach County.
They were teenagers then, high school kids with floppy blond hair who rode the waves off Atlantic Avenue in Delray Beach, or the Boynton Inlet, or Singer Island. Most are still here, still surfing, and working now to preserve the local history they helped make.
“I began surfing in 1964, when I was a sophomore at Seacrest High School,” remembers Tom Warnke. “The same year the Beatles came out.”
In those days, he and his friends rented their boards from Delray Bicycle & Sporting Goods — $1.75 for the day with a coupon from the Sunday paper.
Warnke was 15 that year. He’s 62 now, still surfs, and won the southeast regional competition in his age group not long ago.
“You don’t find the real appeal of surfing until you’ve spent about 10 hours humiliating yourself out there,” he said, “but once you get out on the open face of a wave, you’re hooked. It’s a bath for your brain.”
Ironically, one of the most important figures in local surfing history was not a surfer.
M.E. Gruber was a mailman, and an amateur photographer. When Hurricane Betsy battered the coast on Sept. 9, 1965, a Greek banana freighter called the Amaryllis was shipwrecked off Singer Island, creating a windbreak. 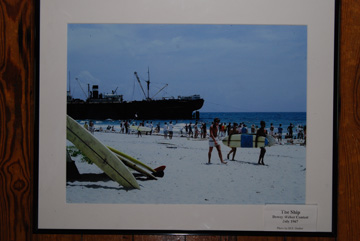 For the next three years, until the Amaryllis was towed offshore and buried, local surfers had great waves. And “Mr. Gruber,” as the kids always called him, had his subject. Between 1965 and 1972, Gruber took thousands of surfing photos from Lake Worth to Jacksonville, then organized occasional slide shows to display his work to the kids he’d photographed.
In 2007, one of those former kids, Fred “Deadeye” Salmon, happened on an obituary in the newspaper. M.E. Gruber had died in Fort Worth, Texas, miles from the waves and surfers he chronicled.
Salmon contacted the photographer’s sister, and Gruber’s 5,000 photographs gave birth to the Palm Beach County Surfing History Project, formed in 2008 to preserve, document and exhibit the sport’s local past.
You’ll find a generous sampling of the project’s current collection on display at the Schoolhouse Children’s Museum in Boynton Beach through March 30.
“We say we’re for children ages 2 to 12,” explains Lindsey Nuzzo, the museum’s development coordinator, “but this is our 10th anniversary, and we’re trying to expand our reach and range, and we felt this exhibit could be something for all ages.”
With Gruber’s photos recovered, other donations soon followed. David Aaron contributed a 10-foot balsa board he surfed on here in the 1940s. 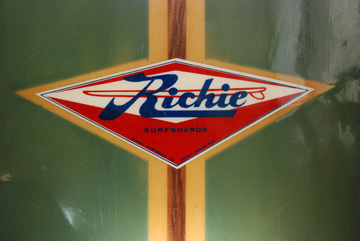 Warnke’s sister, Sarah, added an original “Richie,” built by Bob Richwagen at his bicycle shop on Atlantic Avenue in 1964.
“Dad changed with the times,” says his son, Albert, “so when that movie Gidget came out, he started making boards.” “In those days,” Richwagen says, “a board sold for about $125. Today you’d pay $700 or $800, at least.”
And those $1.25 a day coupons? Today, Richwagen runs a watersports rental concession on Delray Beach, where his boards bring $35 for an eight-hour day.
If surfing has an official headquarters in Palm Beach County, it’s the venerable Nomad Surf Shop in the county pocket.
Ron Heavyside was only 20 when he took over a corner of the TV repair shop owned by his father, Richard Heavyside, back in 1968. His stock consisted of perhaps 10 boards he’d shaped himself, and a few pairs of surf shorts. Heavyside has retired now, but the Nomad still thrives, run by his sons, Ryan and Ronnie.
The corner of that TV repair shop is a now a sprawling, 6,000 square foot maze of surfboards and shorts, T-shirts and sandals.
“I started surfing at 5,” says Ryan Heavyside, 26. “If my dad had golfed, I’d golf. When you’re dad builds surfboards, you surf.”
In 1996, he was ranked eleventh in the boys division of the Surfing America team, and though he no longer competes, he still surfs. And so do an increasing number of enthusiasts.
“This business is very seasonal,” Heavyside concedes, “but surfing is more popular now because it’s gone from being just a sport to a lifestyle. I’ll be in an airport in Indiana and see people wearing surf clothing. The surf industry used to be super-simple. Just your board and surf shorts. Now some of those shorts sell for $99, and a replica of a classic board can cost $2,000.”
In addition to the boards and Mr. Gruber’s striking photographs, the exhibit also features T-shirts worn by the various local surfing clubs of the 1960s. 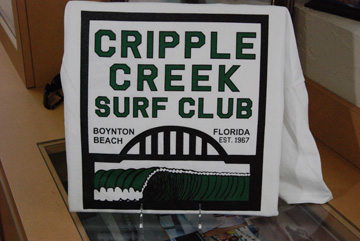 Riviera Beach had its Possum’s Reef club by 1967. Salmon formed the Sandy Shores Surfing Club on Singer Island in 1967, and Warnke founded the Cripple Creek Surf Club at the Boynton Inlet the same year.
“By 1967, we had about 12 surfing clubs in the county,” Warnke says, “and we’d meet at the old MacArthur at Southern Boulevard and Military Trail. We called it the U.N. of surfing clubs.”
And then there was a club called the Surf Fossils.
“Those were the older guys,” Warnke says, “35 or 40.”
But perhaps the most intriguing item on display, and the easiest to overlook, is a simple bumper sticker in the display case.
I Gave To Save Surfing, it says. PBCSA, $1.
In 1964, before it tried to ban leaf blowers, newspaper racks and topless jogging by men, the town of Palm Beach banned surfing.
Arrests were selective, and for four years the ban went unchallenged. But in 1968, when a local surfer named Bruce Carter pleaded not guilty and lost before Gus Broberg, the town’s judge, a tipping point was reached and the Palm Beach County Surfing Association was formed.
By selling bumper stickers, the surfers raised about $1,500 to hire a sympathetic young lawyer named Joel Daves, later the mayor of West Palm Beach.
In October 1968, Daves appealed the case to the county’s circuit court, and won.
The town appealed to the Fourth District Court of Appeal, and won.
Daves appealed to the Florida Supreme Court, and in July 1970, surfing won.
Palm Beach could regulate surfing, the high court ruled, but not ban it.
Surfing survived, and grew.
“There’s ten-fold more surfers out there now,” says Warnke, “and you can’t get new surf spots, so it gets more crowded and dangerous each year.” But he keeps surfing anyway.
“Surfing is an independent sport,” Ryan Heavyside explains. “It’s just you and the ocean, and the feeling of catching that one great wave is the same feeling someone else might get from shooting a hole in one, or winning a Nascar race. That same adrenalin. “And once you have your board, the waves are free.”

TOP PHOTO: Prominent members of the local surf community, Tom Warnke, Albert Richwagen and Ryan Heavyside pose with a variety of boards representing the evolution of the sport over the years. Photo by Tim Stepien

The Schoolhouse Children’s Museum, at 129 E. Ocean Ave. in Boynton Beach, is open Tuesday through Sunday from 10 a.m. to 5 p.m. Admission is $3 for children 2-17 and $5 for adults. For information, call 742-6780 or visit  www.schoolhousemuseum.org.
For information about the Palm Beach County Surfing History Project, visit www.surfhistoryproject.org.