Paul Aho started surfing off Ocean Ridge in 1964. His parents owned Henry’s Motel, a block from the ocean. He borrowed boards from Ron Heavyside, who went on to found the Nomad Surf Shop in the county pocket. He was 11 that year.
Aho is pushing 60 now. A former adjunct professor of printmaking at Florida Atlantic University, he’s currently the head of photography and digital imaging at Kentucky’s Paducah School of Art. And, yes, he still surfs.
Now Aho’s two great loves have come together in “Surfing Florida: A Photographic History,” on display at FAU’s University Galleries through May 12.
“Surfing began as a culture for renegade youth,” he said recently, taking a break as assistants scurried about. “You used to see bumper stickers that said ‘Surf, Suds and Sex.’ But now it’s transformed itself into a very popular and publicly embraced occupation, both recreationally and professionally.” 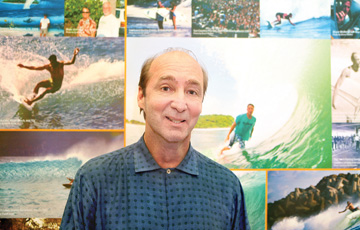 Working with Galleries director W. Rod Faulds and supported by the Florida Humanities Council, their exhibit documents that transformation.
You’ll see wall panels packed with photos and text, media stations showing video clips from classic Hollywood surfing movies such as Gidget and vintage 8mm and oral histories constructed by Melbourne Beach documentarian Will Lucas. The panels offer the first comprehensive look at surfing in Florida, from Miami to Cocoa Beach, Daytona to the Panhandle and St. Petersburg south.
And, of course, there are surfboards — about 55 historical boards on display.
“This is a history exhibition,” says Faulds, “not an art exhibition. It’s an attempt at telling a story of surfing that’s approached with academic credibility.”
If all goes well, Aho and Faulds hope to expand their research into a large, coffee-table book that captures the sport’s Florida history in detail.
“We have a lot of panels with text, and even some history professors would say there’s too much text,” Faulds concedes, “but it was a struggle to compress because we’re working toward a book.” 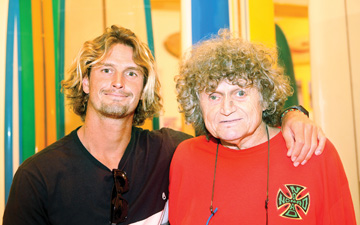 Surfing is generally considered to have arrived in Florida when the Whitman brothers — Bill, Dudley and Stanley — started surfing on Miami Beach in the early 1930s. But Aho suspects it can be traced to the Panhandle after a 1908 article in Collier’s magazine featured Hawaiian surfers.
“There’s something inherently exotic about surfing,” he says. “You’re riding an energy form. Some surfers look at it as almost a religious practice, a whole sense of freedom, a free-form, almost artistic practice.
“I hope people come away with a broader recognition of the contribution Florida has made to shape the surfing lifestyle, and how surfing has shaped Florida.” 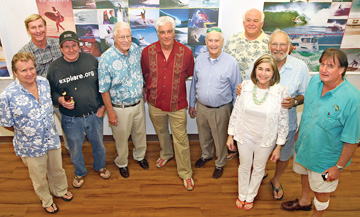 As Aho spoke, a student employee majoring in graphic design bustled nearby, helping to put the finishing touches on the exhibit.
Andrew Santoro is 22, a native of Boynton Beach who started skateboarding in 2001. He was 11 that year.
“Working on this project, I’ve learned that there’s a lot more to surfing than just the stereotype of the slacker who doesn’t do anything,” Santoro said. “It’s not as easy as it looks, and it’s got a rich tradition. And surfing is looked on as universally cool. People who walk by the gallery look in and stare, and then they get a big grin on their face.”

“Surfing Florida: A Photographic History” will remain on display at the University Galleries in the Dorothy F. Schmidt College of Arts and Letters at Florida Atlantic University through May 12. The galleries are open 1-4 p.m. Tuesday through Friday, and 1-5 p.m. Saturday.Call 297-2966.