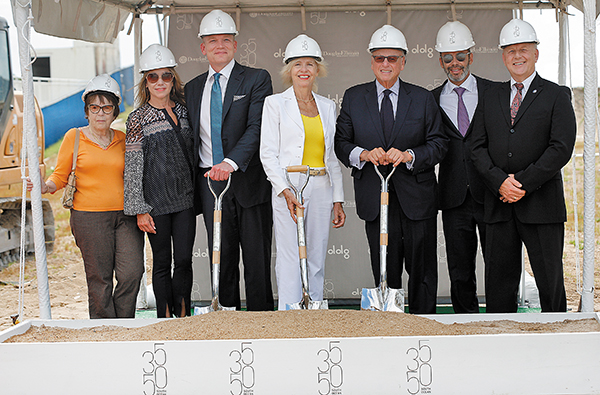 According to the real estate market reports for May, the 4.9 months’ supply of inventory for single-family homes in Palm Beach County is the same as last year. The median sales price has increased 7.9 percent to $335,000.
Year-over-year increases in home sales showed a 45.1 percent increase in the homes sold between $600,000 and $999,999, 19.8 percent increase in homes over $1 million and 18.6 percent increase in homes between $400,000 and $599,999.
Additionally, there was a 4.3 percent year-over-year increase in closed sales to 1,768 with a 14.3 percent increase in cash sales.
“Statistics for May reflect double-digit increases in closed sales above $300,000, which contributed to the rise in our median sale price,” said Jeffrey Levine, president-elect of the Realtors Association of the Palm Beaches.
***
Douglas Elliman released its second-quarter 2017 South Florida market reports in July, as written by consultant Jonathan Miller, president and CEO of Miller Samuel Inc.
Highlights that Miller noted in Boca Raton and Highland Beach: “Median sales prices for both property types moved higher; condo sales surged as inventory edged higher, while single-family sales declined and inventory fell sharply; the pace of the market moved a lot faster than the same period last year.”
Compared to the same period a year ago, for luxury condominium sales (with an entry threshold that began at $540,000), median sales price declined 19.8 percent to $842,500. Days on the market were 112, up from 109 days. Listing inventory increased 62.6 percent to 374. For luxury single-family homes (with an entry threshold that began at $1.175 million), median sales price declined 9.1 percent to $1.995 million. Days on market were 165, down from 188. Listing inventory fell 15.6 percent to 353.
Highlights that Miller noted in Delray Beach: “Median price by property type moved higher as did the number of sales; east of Federal Highway, prices showed stability as the houses were smaller this year in square footage; the luxury condo market was up, showing more sales than last year.”
For luxury condominiums (with an entry threshold that began at $458,465), the median sales price slipped 1 percent to $640,000. Days on the market were 116, up from 73. For luxury single-family homes in Delray Beach (with an entry threshold that began at $1,070,000), median sales price declined 9.5 percent to $1,547,500. Days on the market were 118, up from 116.
Miller said it’s important to note that across the area over the past couple of years, “the higher-end markets have noticeably improved from where they were a few years back.”
***
In the Hypoluxo Island to Highland Beach barrier island area, sales were down significantly for condos, co-ops and single-family homes, marking the fifth consecutive quarter of declines, according to Corcoran’s quarterly report.
Also, “there were six fewer sales of single-family homes compared to last year, resulting in a decline in sales of 15 percent. Last year saw four sales over $15 million, including one sale for $40 million, while this year had zero sales over $15 million.”
***
The Boca Real Estate Investment Club’s “Back to School, Real Estate Investing 101” at 7 p.m. Aug. 10 will teach investing basics for new real estate investors. Registration begins at 6:30 p.m. It will be held at 2600 N. Military Trail, Suite 150, Boca Raton. The cost is $10 and free for attendees who present college ID. For information, call 391-7325 or visit www.bocarealestateclub.com.
***
The Realtors Association of the Palm Beaches’ Young Professionals Network hosts its fifth annual White Attire Fundraiser from 6:30 to 9:30 p.m. Aug. 11 at a multimillion-dollar estate listed for sale in Boca Raton’s Woodfield Country Club.
The event is open to agents and affiliate members of the Palm Beach association as well as the Greater Fort Lauderdale Realtors. Proceeds will benefit the Realtors Helping Realtors Pay It Forward Foundation, which provides financial assistance to agents and their families in times of need, and Rebuilding Together, a division of the Solid Waste Authority that rehabilitates the homes of low-income homeowners. All My Sons Moving & Storage and Cornerstone Home Lending are sponsors.
***

Despite the slowdown in Palm Beach County mansion sales in 2016, six county agents reported sales of $100 million or more, according to the annual RealTRENDS/Wall Street Journal ranking.
Agents included Pascal Liguori of Premier Estate Properties in Delray Beach, who ranked 20th nationally in sales volume with deals that totaled $224.8 million last year, up from his $81.2 million total in 2015. Ranked 30th on the list is David Roberts of Royal Palm Properties, Boca Raton, with a sales volume of $180.6 million.
*** 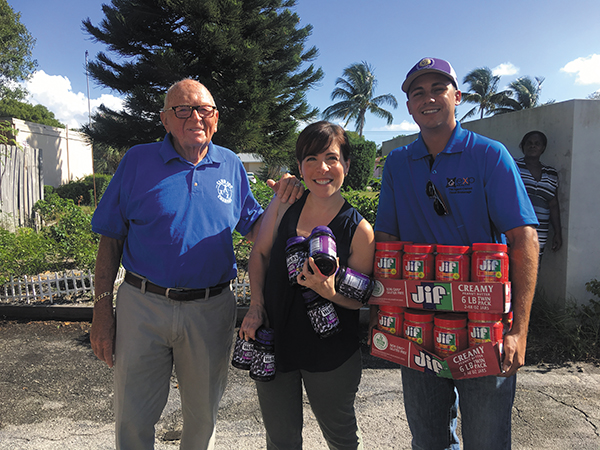 Throughout June, the Realtors Association of the Palm Beaches’ Community Outreach Committee collected 1,000 jars of peanut butter and jelly, which it donated as part of the Spread the Love campaign to benefit the Lake Park Food Pantry and Club 100 for local families and children in need of assistance this summer. Club 100 and its 30 pantry volunteers feed more than 400 families monthly and provide clothing and other essential household items.
*** 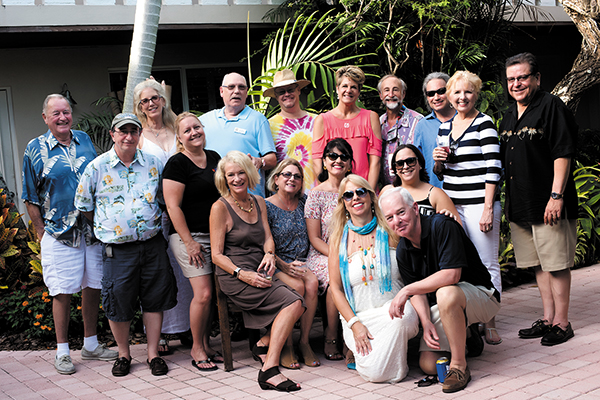 The Greater Delray Beach Chamber of Commerce’s July 7 Ambassadors Social, hosted by Crane’s Beach House Boutique Hotel & Luxury Villas, was attended by Chamber ambassadors and their guests.
The ambassadors, a group of 30 volunteers, welcome and mentor new members and attend new-member ribbon cuttings. “The annual social is an opportunity for us to get to relax and celebrate all our efforts. It’s also a way for our leadership team to thank every member for the work each does on behalf of the chamber,” said ambassador Chairman Rich Pollack.
***
At the 2017 Golden Bell Education Foundation Fundraiser, more than 250 people gathered at Piñon Grill in Boca Raton to celebrate Golden Bell’s 26th anniversary as well as the sixth anniversary of the Inner Circle Executive Club. The June event raised $5,500 that benefited the public school system in Boca Raton and local educational programs.
The Boca Chamber’s Golden Bell Education Foundation announced that $85,000 was granted to Boca Raton public schools and scholarship programs for the 2017-18 academic year. Also, applications for the 2017-18 Young Entrepreneurs Academy are now open for middle and high school students in the Boca Raton area. Contact Christie Workman for information on the program at cworkman@bocachamber.com.

***
The Boca Chamber and JM Lexus present “Wine & All That Jazz,” the Boca Chamber Festival Days signature event, from 7 to 10 p.m. Aug. 26 at the Boca Raton Resort & Club. The event will offer more than 100 wines as well as food from some of Boca’s restaurants.
Boca Chamber Festival Days was designed to connect nonprofit members in Boca Raton with the for-profit community. It runs throughout August and features 22 total events.
A portion of the proceeds from “Wine & All That Jazz” will go to support the efforts of the Golden Bell Education Foundation. To register, visit the Chamber’s website: www.bocachamber.com/events.
***
The Boynton Beach Chamber of Commerce hosts guest speaker Felicia Combs, meteorologist on WPTV, at its networking event starting at 11:30 a.m. Aug. 9. The price is $25 for admission purchased online in advance or, if available, $35 when purchased at the door. The event will be at Benvenuto, 1730 N. Federal Highway, Boynton Beach. To RSVP, visit www.boyntonbeach.org or call 732-9501.
***
After 23 years on South Federal Highway in Delray Beach, Bill Hood & Sons Art & Antique Auctions has moved to a bigger location at 2885 S. Congress Ave., units A and B, Delray Beach. Open from 10 a.m. to 5 p.m. daily, the auction house is accepting consignments and holding its monthly auctions at its new facility.
Carolyn Hood, owner partner with her son, Christian Hood, and a third partner, Dan Perry, explains that after all those years, they had “totally outgrown” their location. Also, she said, “Our warehouse had been separate from our business location. It is a dream come true to now have the warehouse and our gallery under the same roof.”
An official grand opening, with a two-day auction, is scheduled for Aug. 15 and 16. A tag sale will also be held on a Saturday following the auction. To find out when, call 278-8996 or email info@hoodauction.com.
***
Dash Travel, an agency established in 1959, has moved to 280 NE Second Ave., Cottage 2, Delray Beach. Very Delray Beach vintage in feeling, Dash Travel is now headquartered in a renovated cottage with a wood interior, efficiency kitchen and designer bath. It is surrounded by tropical landscaping and has ample free parking.
“We are delighted to stay in downtown Delray, while upgrading our headquarters for the discerning traveler,” said owner Jeff Dash. “More than ever, with the internet overload of information, Dash Travel serves to streamline options and offers valued advice and resources so that travel need not be chaotic, messy or confusing.”
For information, visit www.DashTravelandCruises.com or drop by its new location. The phone number remains the same: 498-8439.
***
Eau Palm Beach Resort & Spa was included in July’s Travel + Leisure magazine’s annual “World’s Best” list as one of the 10 best resort hotels in Florida. Based on the magazine’s survey of readers, hotels were rated on their facilities, location, service, food and overall value.
***
Members of Liberty Property Trust’s South Florida office spent June 16 at the Palm Beach County Food Bank, organizing and packing food for families as part of the 14th annual Bill Rouse Day of Caring. The company’s offices in the United States and United Kingdom closed for a day of service in memory of founder Willard G. Rouse III.
***
For its fourth event this summer, the League of Women Voters of Palm Beach County hosts a free panel discussion on “Fake News (Alternative Facts or Just Not True)” from 9 to 11 a.m. Aug. 12 at the Palm Beach Post Auditorium, 2751 S. Dixie Highway in West Palm Beach. Speakers include Howard Goodman, editorial writer at The Palm Beach Post; panel moderator Joyce Reingold, former publisher of the Palm Beach Daily News; Brett Sandala, founder of Ocean Drive Social, a brand consulting firm specializing in social media marketing and online branding; and Brian Williams, former managing editor of the National Enquirer.
This presentation is underwritten by Lytal, Reiter, Smith, Ivey & Fronrath. People interested in attending are encouraged to register in advance at www.lwvpbc.org.