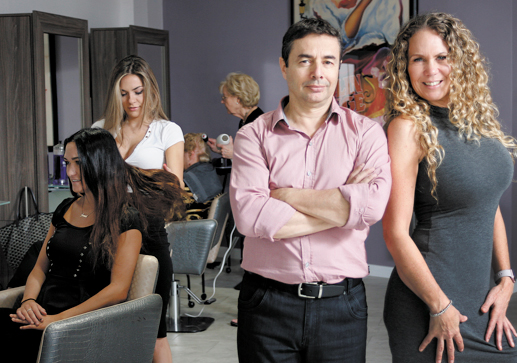 Emmanuel Tinebra and Donniel Busey (right), owners of Posh for Hair in Manalapan,

bought the salon in January 2016 and recently oversaw its makeover.

The salon has been in business for more than 30 years.

Posh for Hair in Manalapan has been making customers beautiful for more than three decades. The salon finally did the same for itself.
Between cuts and color, manicures and pedicures and a full complement of aesthetic services, the 2,000-square-foot space in Plaza del Mar underwent a remodeling. White walls received a welcome coat of grayish-plum paint, glass and laminate made way for taupe-stained wood, and outdated tile with worn grout lines was torn up and replaced.
“We totally changed the floor,” said Donniel Busey, who bought the business in January 2016 with co-owner Emmanuel Tinebra. “We don’t have popcorn ceilings anymore. Everything is really relaxing.”
The remodeling took five weeks to complete and was finished in time for the partners to celebrate their first year at Posh for Hair.
“We’ve been getting so much amazing feedback from snowbirds who haven’t seen the change, and they are loving it,” Busey said. “The look of our salon now is really plush. You feel like you’re getting pampered instead of shuffled around, and that’s what I want for my clients.”
In addition to the cosmetic improvement, Posh for Hair received a new computer system that creates personal profiles, sets appointments and accepts credit cards.
“It was very old-school in here,” Busey said. “It was cash and carry, fast-paced and not relaxing.”
Clients who have come to the salon since the remodeling can enjoy a spa-like experience instead of a rudimentary shampoo, trim and blow-dry.
“I like being able to set the culture, and I like being part of a team,” Busey said.
The 47-year-old hairstylist always knew she wanted to enter the beauty industry and found an opportunity to capitalize on her trade by investing in a well-established company. Posh for Hair originally was owned by Edith Burlison, who died in July at age 92.
“She was still doing hair up until the end,” Busey said. “For me, I saw a connection with her. I wanted to get approval from her. I felt like she was an excellent professional businesswoman because the salon is still here 35 years later.”
When Busey took over with Tinebra, Burlison became an employee and, eventually, a legacy.
“She made a name for Posh,” Busey said.
Fourteen employees work among eight cutting stations, four color areas, three manicure tables, three pedicure chairs and a skin-care room. Tinebra manages it all.
“It’s not easy,” said the 54-year-old concierge of sorts, who regularly drives 10 or so clients to and from the salon to get their hair done. “My job is to make everyone happy. The most important thing is the service we give.”
Posh for Hair, Plaza del Mar, 271 S. Ocean Blvd., Manalapan; 582-4447; 9 a.m.-7 p.m. Tuesday; 9 a.m.-5 p.m. Wednesday, Friday and Saturday; 9 a.m.-8 p.m. Thursday; facebook.com/posh4hair