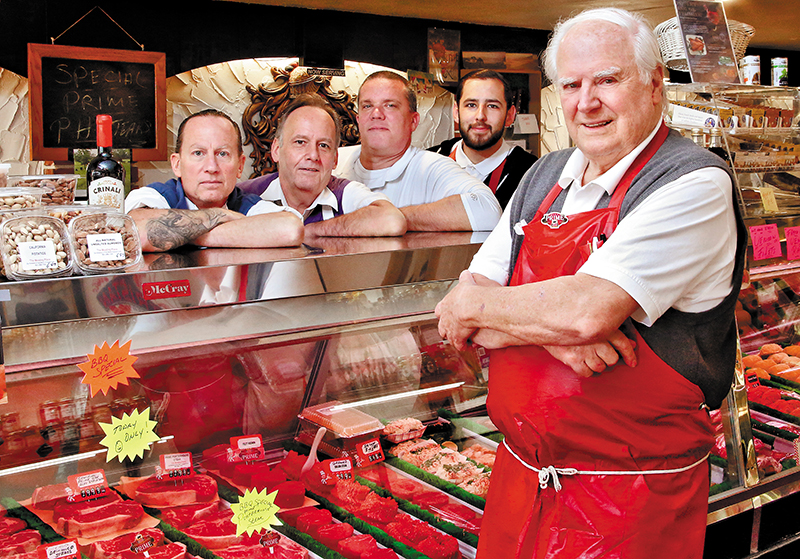 Sometimes there were moments when he wondered how much longer he’d keep the business. Tastes were changing, the market for quality meats coming and going, everyone looking for bargains. His three children had left for other pursuits. Some of his longtime customers were gone now.
That was in 2010.
A decade later, Del Valeriay still owns The Meating Place, still comes in mornings to make sure his top quality meats are top quality, still greets the customers he’s served for 52 years.
Valeriay is 82 now, and the butcher shop is still at 277 E. Palmetto Park Road. He’s owned it for 42 years, and worked there a decade before that.
“We’re in business more than 50 years now,” he says, “and we’re very proud that it’s our passion for quality and service that keeps bringing our customers back.”
When the doors open at 9:30 a.m., Valeriay has the full trays lining the display cases — the Delmonicos and the New York strip, the porterhouse, the prime ribs, short ribs and sirloin burgers. A little farther along you’ll find the lamb from Colorado and the veal from Wisconsin.
“You have to have the passion for the business in you,” he says, surveying the display. “If it’s not 100%, go on to something else.”
Valeriay was born with it in him, 100%.
His grandfather slaughtered beef in Italy before emigrating, then he and Valeriay’s father owned shops in Meriden, Connecticut.
In 1968, Valeriay came to Boca Raton and went to work for a fellow named Sal Santelli, who had opened The Village Butcher, the town’s first meat market, in 1963, and later The Meating Place.
Ten years later, he bought the business from Santelli and has owned it ever since.
“He was a good friend,” Valeriay says. “He’s gone now.”
In 1993, Valeriay opened another Meating Place at Yamato and Jog roads but sold it in 2013.
The original shop on East Palmetto Park Road is still basically the same as when he bought it, but the town around it isn’t.
“When I was first here, there was nothing,” he says. “Now look. Nine-story buildings all around us.”
He shakes his head, still amazed by the changes he’s seen.
“I remember going to pick tomatoes at a place called U-Pick over where Spanish River High School is now,” he reflects. “Strawberries and tomatoes.”
The Meating Place is a family business in which the employees, unrelated by blood, have become family through longevity. The manager, Jack Baitz, 63, has been here 36 years. His twin brother, Mike, has been a meat cutter and counterman for 15.
They were born on Christmas Day, Jack first by 10 minutes.
“We’re mirror twins,” he says. “Mike’s a lefty, I’m a righty. He has girls, I have boys. He’s mechanical and I’m better at cutting meat. He’s boisterous and I’m more on the quiet side.”
Jack takes credit for the market’s prepared food business.
“When I first came here I said, let me try some ham salad,” he recalls with pride. “That was the first thing I made, and we went from ham and chicken to tuna and crab salads.”
Today, the cases are full of prepared meals — chicken Parmesan and cacciatore; stuffed shells, peppers and cabbage; shepherd’s pie and beef stew. All the cooking is done in the store, using the same high-quality meats they sell.
“I might even do some jambalaya,” Jack says. “Today I’m doing meatloaf.”
One item you won’t find? Veggie burgers.
“I’m a meat eater,” Valeriay says. “But everything in moderation. I eat meat twice a week, and I don’t order meat in restaurants.” He shakes his head. “When you handle the best, you don’t need the rest. I eat fish in restaurants.”
For the past year, Jack’s son Joey, 25, has been here too, learning the business.
“The most important lessons I’ve learned,” he says without hesitating, “are know your stock and know your customers.”
The Meating Place has been knowing its customers for a long time.
“We’re taking care of the kids’ kids now,” Valeriay says. “You know the customers’ names and their dogs’ names.”
Jack nods. “One lady I’ve seen pregnant with four kids over the years,” he says, “and now the kids are finished with college.”
Sal Falcone likes to think his business has been around a long time. He and his brother, Vinny, opened their V&S Italian Deli at 2621 N. Federal Highway in 1985, but The Meating Place gives him pause.
“We buy all our ground beef from there to make our meatballs and lasagna,” Falcone says. “We can’t find anything better in the marketplace. And I love that name, The Meating Place. It’s a great pun, and it’s so true. The people who come in all know each other, so it really is a meating place and a meeting place.”
But how much longer?
Del Valeriay wondered back in 2010, but it doesn’t seem to concern him these days.
“I’m semi-retired now,” he says. “At 82, I think I deserve it. I swim, and I don’t drink or smoke. No desserts, no candy. My mom lived to be 93, and I have her genes.
“How much longer? I leave that up to the Lord.”