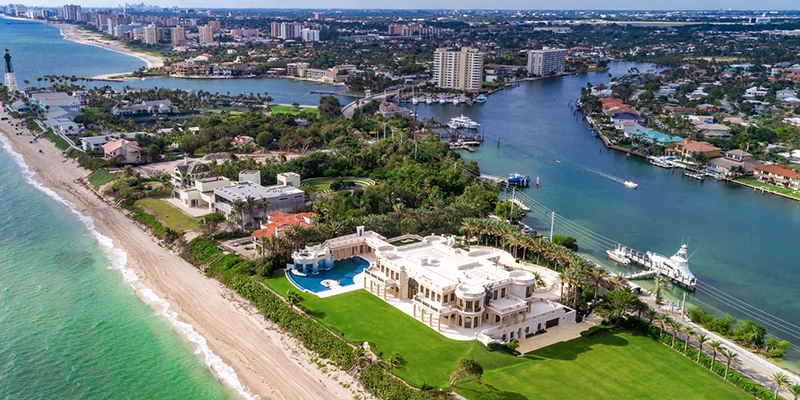 The Playa Vista Isle estate on the Hillsboro Mile sold for $42.5 million at auction, $15 million more than the previous high for a home in Broward County. Photo provided

Concierge Auctions and Ralph Arias of One Sotheby’s International Realty managed the listing and auction process of the 60,000-square-foot mansion. Sotheby’s managers said the deal is the most expensive residential sale to close in Broward County. The second priciest is the $27.5 million sale of 5 Harborage Drive, Fort Lauderdale, in 2015.

Just down the street at 951 Hillsboro Mile, Kevin Van Middlesworth, president and CEO of Platinum Group Security, paid $6.05 million in December for the furnished waterfront home. William M. Bell III, a trustee of a land trust agreement dated Dec. 28, 1989, is the seller.

David Willens, founder and chairman of Sage Dental, listed his home at 3715 S. Ocean Blvd., Highland Beach, for $27.5 million with Steven Solomon, an agent with Douglas Elliman Real Estate. Sited on a half-acre on the ocean, the 14,808-square-foot home comprises seven bedrooms, seven bathrooms and two half-baths. Features include a living green wall in the foyer with 1,800 plants, Italian imported basalt lava stone facing on some of the interior walls, its own cell tower, and a $1 million Bang & Olufsen audio system. For information, call 289-3609.

Flancbaum is president of Colts Neck Associates, a custom homebuilder based in Colts Neck, N.J.

The two-story Boca Raton home, built in 1962, sits on a 1.6-acre lot and last sold in 2012 for $9.75 million. The current listing agent, Jonathan Postma of Coldwell Banker, said the buyer eventually plans to redevelop the property.

Postma, who brokered both sides of the deal, said it marks one of the highest residential sales in Boca Raton and is the third property he’s sold for more than $10 million on that street during the past year.

Eugene Tenenbaum, who owns the property next door, bought the four-bedroom, four-bathroom home. The Ferbers had paid $5.5 million for the property in 2015. Ferber co-founded advertising.com in the mid-1990s and sold it to AOL in 2004 for $435 million, according to media reports.

National Realty Investment Advisors launched sales in December for Ocean Delray, its 19-unit condo development that will replace the Wright by the Sea hotel at 1901 S. Ocean Blvd. in Delray Beach. NRIA purchased the property for $25 million in October.

The project is being co-developed with U.S. Construction. Residences at Ocean Delray will begin in the high $4 million price range, according to a news release. IMI Worldwide Properties will handle sales for Ocean Delray.

The hotel will be demolished and construction will begin in the first quarter of 2019, with a completion date slated for late 2020. South Florida architect Randall Stofft is designing the three-story building. The residences will range from 3,300 square feet to more than 4,600 square feet.

A $5 million acquisition loan was provided by Accordia Life & Annuity Company. Cushman’s Jason Hochman advised the buyer on the loan deal. Linton Center was 95.8 percent leased at the time of sale, with 32 tenants in a mix of industries.

Group P6’s nine-story, 24-unit condo project at 327 Royal Palm, Boca Raton, celebrated its grand opening in December. Since sales launched in January 2015, 70 percent of the residences have been sold. Units range from 3,177 to 3,461 square feet, and prices start at $1.699 million.

Posh Properties, founded by Jerilyn Walter in 2012, opened a new office at 5112 N. Ocean Blvd., Ocean Ridge, in November. Walter, previously an agent with Prudential Realty for 10 years, founded her firm because she wanted to take a more personal

“The Ocean Ridge location was important to me because quite a few Posh agents live in the area and I knew Posh could continue to build long-lasting relationships by assisting customers in finding their homes, their Florida lifestyles and more importantly, becoming part of their community,” Walter said.

“Because our Realtors are local residents, we easily introduce our customers to restaurants, vendors, charities and events. Posh agents believe in being around long after the transaction closes.”

Mauricio Umansky’s Beverly Hills-based brokerage, the Agency, opened its doors at 20 SE Third St. in Boca Raton in early December as part of its expansion plan for South Florida. Chris Franciosa and Jared Ringel are leading the expansion. Howard Elfman is the managing broker of the Boca Raton location. The two-story, 6,700-square-foot office will include the Agency Development Group and the Agency Creates, its creative division.

community on Feb. 19. The celebration from 5:30 to 10 p.m. will feature networking opportunities, a three-course meal, entertainment by comedian Craig Shoemaker, and talks by Robert Shemin and Frank McKinney.

The event will benefit Boca Helping Hands, Caring House Project Foundation, and Heroes to Heroes. It will be held at the Addison, 2 E. Camino Real, Boca Raton. Pre-registration starts at $129. For information, call 391-7325 or visit www.BocaRealEstateClub.com.

Thanks to votes by newlyweds and for the third consecutive year, the Lake Worth Casino Ballroom was awarded the WeddingWire Couples’ Choice Award for quality, service, responsiveness and professionalism. WeddingWire.com is a wedding planning website.

Delray Affair is a winner in the seventh annual America’s Best Art Fair Awards competition. It ranked No. 13 in the “Top 50 Best Art Fairs” in the United States, according to the survey. Produced by the Delray Beach Chamber of Commerce, the event takes place in downtown Delray Beach. The Chamber will celebrate its 57th year of Delray Affair from April 12-14.

The America’s Best Art Fairs Awards are based on online voting by patrons, collectors, organizers and artists both regionally and nationally.