Ronald and Cindy McMackin of Pan-Pacific Mechanical have purchased the new six-bedroom, Intracoastal-to-ocean estate — with approximately 21,000 total square feet — at 1660 S. Ocean Blvd., Manalapan.
The purchase price was recorded at $38.875 million, making it the highest-priced sale in Manalapan in 2020, and the highest price ever recorded for an Intracoastal-to-ocean property in Manalapan.
The seller was 1660 S. Ocean LLC, which is managed by Stewart A. Satter, a Manalapan town commissioner.
Tom Benedict of the Benedict Group was the architect and Robert Burrage of RWB Construction was the general contractor. The estate spans 150 feet along the Intracoastal and the ocean, with amenities such as a lakeside pool, 10-car garage, private beach tunnel under State Road A1A, loggia with a summer kitchen, and lower level spa and exercise room.
It is fully furnished by Marc-Michaels Interior Design.
Pascal Liguori listed the contemporary-style estate at $44.85 million on Nov. 10. It went under contract eight days later, and closed Dec. 30.
The transaction was recorded on Jan. 5.
Broker Lawrence Moens of Lawrence A. Moens Associates represented the McMackins.
Ronald McMackin is chairman/CEO and Cindy McMackin is president of Pan-Pacific Mechanical, a leading full mechanical design/build subcontractor for large-scale construction projects.
In mid-December, the McMackins sold their Palm Beach estate to a trust affiliated with actor Sylvester Stallone.
Satter developed the estate through his Carnegie Hill Development. This is one of four estates he has developed and sold in Manalapan, totaling over $100 million in sales.
Satter is the former chief executive officer of Consumer Testing Laboratories — a leader in quality assurance services for the retail industry. Underwriters Laboratories acquired CTL in 2016 in a transaction handled by Citibank. Satter is also the founding partner of NYU/Stern Endless Frontier Labs, a tech startup accelerator in New York City.

In another recent transaction, Pascal and Antonio Liguori of Premier Estate Properties report that they represented both the buyer and seller in the $25.75 million sale of an ocean-to-Intracoastal compound at 1040 South Ocean Boulevard, Manalapan.
On 2.14 acres with 200 feet of Atlantic Ocean and Intracoastal frontage, the 23,795-total-square-foot estate and guest house, designed by Yates Rainho Architects, was completed in 2018. Its features include two elevators, three laundry rooms, and five garage bays. 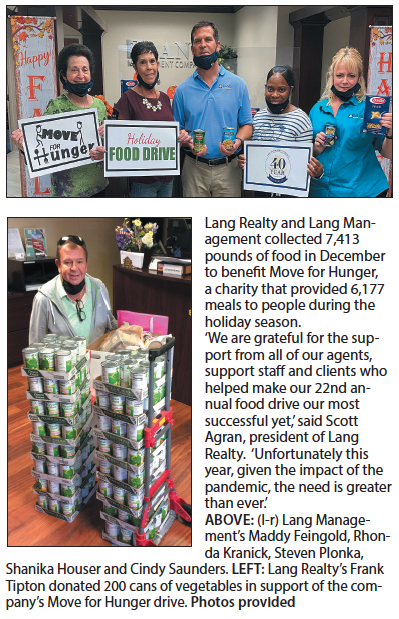 Members of the Greater Delray Beach Chamber of Commerce have stepped up to support other members experiencing financial difficulties during the coronavirus pandemic, through an initiative called the Giving Tree.
The donations are intended to allow businesses to keep their chamber memberships, providing each about three months of payment, or $100 worth, into their renewal years.
All About Florida Homes/Lang Realty was among the first to step up to make a donation.
Other contributors included Stephanie Immelman; Lorraine Plakstis; Lynn Van Lenten; All About Florida Homes, Noreen Payne; BSA Construction; Casa Mannabliss; Caler, Donten, Levine, Cohen, Porter & Veil PA; Festival Management Group; Plastridge Insurance Agency; Susan S. Weinblatt, Evershore Financial Group; UBS Financial Services; and Young Dentistry.

Christel Silver, owner of Silver International Realty in Delray Beach, was selected president of the International Real Estate Federation’s Miami and Caribbean Council for 2021 and was voted in to represent all councils in the country at the federation’s USA board of directors meeting. 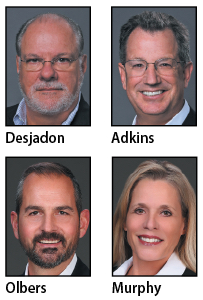 Roger L. Desjadon, co-founder and CEO of Florida Peninsula Insurance Company, plans to retire soon. In the first quarter of 2021, he is transitioning from his role as CEO but remaining as a consultant and member of the board of directors, as well as continuing to lead legislative affairs for the company.
Paul M. Adkins will assume the responsibilities of CEO. Also, the company hired Gard Olbers as its chief risk officer. Olbers previously worked as senior managing director at Aon Reinsurance Solutions. Cindy Murphy was promoted to vice president of finance and will join the company’s executive management team. She previously served as the corporate controller.

The chamber’s leads group, Delray Business Partners, chaired by Jan Kinder, has set a record for collaboration with one another.
During 2020, the 31 members generated more than $297,000 of gross sales by doing business with one another as well as by referring their colleagues in the group to other potential clients. For information about the Greater Delray Beach Chamber of Commerce, contact Carolina Rush at 561-278-0424 or visit www.delraybeach.com.
For information on Delray Business Partners, visit https://delraybusinesspartners.com.

In January, Margaret Moraskie was appointed CEO of Delray Beach-based Levenger, which sells reading, writing and lighting materials. Previously, she was the company’s chief marketing officer. Before joining Levenger, Moraskie was senior vice president of consumer analytics and intelligence for Chico’s FAS. Moraskie is an active board member of the Women in Retail Leadership Circle. She has a bachelor’s degree with honors in marketing from Boston College.

The League of Women Voters of Palm Beach County has partnered with Solar United Neighbors to launch the Palm Beach County Solar Co-op, which works to help county residents go solar. Other partners on the co-op include the cities of Boca Raton, Delray Beach and Boynton Beach, Climate Reality Project Boca Raton Chapter, Elders Climate Action, Sierra Club, Southeast Alliance for Clean Energy, and South Florida Regional Planning Council Clean Cities Coalition. The co-op is free to join and open to homeowners and business owners. After a competitive bidding process, co-op members will select a single solar company to complete installations. Joining the co-op does not obligate members to purchase solar. Instead, members will have the option to individually purchase panels and electric vehicle chargers based on the installer’s group rate.
Solar United Neighbors will host several free information sessions to educate community members about solar energy and the co-op. If you are interested in attending, visit https://coops.solarunitedneighbors.org/coops/palm-beach-county-solar-co-op/.
Virtual information meetings are planned for 6 p.m. March 16 and April 7.