Remember last fall when this column covered an item about Rob Van Winkle, aka “Vanilla, Ice,” who was looking for an investor for 4020 S. Ocean, Manalapan? The idea, marketed via a YouTube video produced by Realtor James Arena, was that the 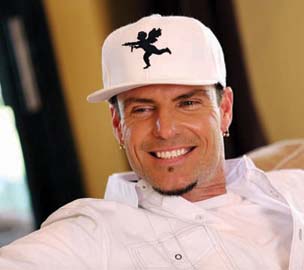 investor would buy and renovate the house (currently owned by Ken Brown), and Vanilla Ice would manage the project and feature it on his TV show.

At this point, Arena and Van Winkle bill this investment opportunity as a demo and rebuild, but the heat is on due to a court-ordered auction of the property. As such, the Vanilla Ice offering might melt away.

In January, Van Winkle did talk with the town of Manalapan’s administrators about the possibilities of demolishing and rebuilding the property, but in mid-February, “Mr. Brown came in and told town officials that the Vanilla Ice deal fell through,” said Lisa Petersen, town clerk.

A live auction is currently being advertised by Fisher Auction Company, scheduled for Wednesday, April 8, at 11 a.m. by order of the U.S. Bankruptcy Court Southern District of Florida — West Palm Beach, with a case number naming Brown as the debtor.

“My firm is handling the auction on behalf of secured creditors for the bankruptcy court,” said Lamar Fisher. “To prequalify, bidders must put up $500,000 48 hours in advance of the auction, which will be held at the house. Starting bid is $6.5 million.”

Bernice Lee, attorney for the Plan Propenent (Wendy Brown), said that “the plan (to auction the property) has been orally confirmed by the court, and parties can bring bidders.”

And that’s the plan for Vanilla Ice, who also is facing burglary charges on Hypoluxo Island. “We are still pursuing the project,” he said. “We have a few investors that are going to be at the auction.” 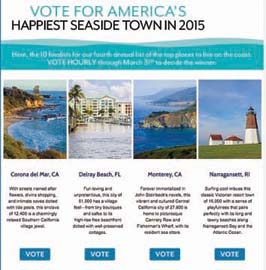 Coastal Living used a photo of Boynton Beach when touting Delray Beach as one of America’s Happiest Seaside Towns.

Delray Beach is ranked No. 4 on Coastal Living’s list of America’s Happiest Seaside Towns, but this year, it’s aiming for the No. 1 spot. And through March 31, just cast your vote and you can make that happen.

“It’s great to be nationally recognized for something the locals have known all along,” said Delray Beach Mayor Cary Glickstein. So, spread the word on social media with #CLHappyTown and vote online at coastalliving.com/happytowns2015.

Coastal Living will feature the No. 1 Happiest Seaside Town in the July/August issue and on coastalliving.com.

Never mind that the photograph used initially online and in the print edition actually is of, gasp, Boynton Beach.

David W. Roberts of Royal Palm Properties will host his annual Showcase of Homes on Sunday, March 15, from 1 to 5 p.m., which will feature about 40 open houses in Royal Palm Yacht & Country Club. Call 368-6200.

Group P6’s sales center for 327 Royal Palm is now open. Comprising 25 three-bedroom residences ranging in size from 3,177 to 3,500 square feet, will feature Italian designer kitchens and private elevator entries into each apartment. Other amenities will include a rooftop area with an infinity pool, fire pit and ocean and golf course views.

The property, at 327 E. Royal Palm Road, Boca Raton, was designed by architect Derek Vander Ploeg. Pre-construction prices start at $1.3 million. Nestler Poletto Sotheby’s International Realty’s development division is the exclusive sales and marketing representative for the project, which is set to break ground this year. For information, visit 327royalpalm.com or call (844) 327-2622.

Wooven Dry Cleaning was accepted as a certified affiliate of America’s Best Cleaners organization. Wooven was required to undergo on-site inspections to determine if it met the organization’s minimum requirements of cleanliness, machinery equipment, stain removal and finishing quality. Wooven will face monthly quality tests and quarterly mystery shopping reports, testing for customer service and quality. About 30 cleaners were certified by the organization for 2015. Wooven has two locations in Boca Raton: 1189 S. Federal Highway and 222 Yamato Road, Suite 103. Call 954-968-6657. 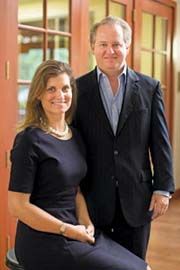 “We only hire extraordinary people who will provide exceptional care,” Chris Ruth said. “Our entire culture is based on putting client’s needs first and providing the best care possible.” For information, call 271-4644.

On March 11, Gold Coast Tiger Bay Club will host attorney Jeff Brown, who will speak on the right to die, “Kevorkian to 2015 today.” On April 8, Palm Beach County Sheriff Ric Bradshaw will speak on crime and terrorism, and on May 13, Florida Atlantic University President John W. Kelly will discuss the state of the university. The talks will be held at the City Fish Market, 7940 Glades Road, Boca Raton, on the second Wednesday of the month at 11:30 a.m. For costs and to make reservations, visit goldcoasttigerbayclub.com or call 852-0000.

The Charles E. Schmidt College of Medicine at Florida Atlantic University has received the Ticho Prize from the Ernst and Gertrude Ticho Charitable Foundation to stimulate student interest in psychiatric medicine and to enhance education in psychiatry. Scholarships from the endowment fund will be awarded annually to a promising student who is graduating from the university’s medical school to encourage him or her to pursue a career in psychiatry.

In February, Kaufman Lynn Construction was named to the University of Florida’s inaugural 2015 Gator100. Sponsored by the University, the Warrington College of Business Administration and the Center for Entrepreneurship & Innovation, the Gator100 recognizes the 100 fastest-growing businesses owned or led by the university’s alumni.

Kaufman Lynn Construction, founded by Michael Kaufman, a 1981 graduate, was ranked 60th with a compound annual growth rate of 39.61. Kaufman Lynn Construction is a 26-year-old, South Florida-based, full-service construction manager and general contractor.  Currently ranked as the eighth-largest general contractor in South Florida by the South Florida Business Journal, the company specializes in the educational, municipal, multifamily, senior living, health care, faith-based, retail and commercial market sectors. Reflecting on the company’s founding and growth throughout the years, Kaufman said, “What first appear as fundamental failures or deflating disappointments invariably prove to be the catalysts to growth and positive change.”

The Institute for Regional Conservation held an event at Green Cay Wetlands in Boynton Beach, featuring James Kushlan and Kirsten Hines, authors of Attracting Birds to South Florida Gardens. Their book, an illustrated information guide, advises South Florida gardeners on almost 400 plants to plant, more than 200 birds to attract, garden design and management. Also during the event, the institute demonstrated how its “Natives For Your Neighborhood” website can help with implementing some of the book’s suggestions.

Evelyn & Arthur, which just celebrated its 30th anniversary, will recognize World Kidney Day, March 12, with a special fundraiser for the National Kidney Foundation of Florida. One hundred percent of sales of the shop’s orange pashminas and 10 percent of every sale that day will go to the foundation. Shoppers will receive 10 percent off all purchases, and a sneak peek of fashions presented at a Planet trunk show, from 10 a.m. to 5 p.m. at the shop’s Palm Beach location, 100 N. County Road. Call 833-1551. 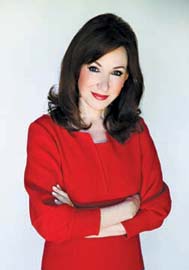 Silvers, a founder and past CEO of the Sci-Fi Channel, practiced law for 10 years. She served on the board of trustees of the University of Miami, the board of directors of the Economic Council of Palm Beach County, and the International Board of Governors of the Children’s World Blood Bank. She is a mentor for at-risk teenage girls with the Women of Tomorrow organization.

The event will take place at the Kravis Center Cohen Pavilion in West Palm Beach. Call 659-0285. 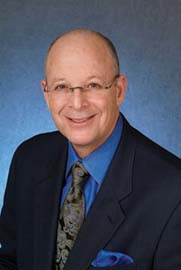 Lang Realty agent Steve Rosen has been named the company’s first South County regional manager. In his new position, Rosen will be a non-competing manager overseeing all offices from Manalapan to Boca Raton.

From 12 to 4 p.m. on Sunday, March 22, Lang Realty will host its annual Open House Extravaganza giving prospective homebuyers an opportunity to tour more than 300 area listings, priced from $200,000 to more than $4 million. Additionally, Lang Realty will be partnering with Place of Hope with a donation to the organization for each participating residence that is sold. Place of Hope is a child welfare organization that provides services, hope and healing opportunities for area children and families who have been traumatized by abuse and neglect. For information, call 989-2100.

Students in grades 3 through 12 are invited to participate in this year’s Fair Housing poster, essay and video contest: “Fair Housing: Together We Build Our Neighborhood.” Students are asked to create works that convey the message that it is illegal to discriminate in the sale or rental of housing because of race, color, religion, familial status, disability, national origin, gender, sexual orientation, age, marital status and gender identity or expression. Entries must be submitted no later than 4 p.m. on March 13. Winners will be announced on April 1, and prizes will be awarded April 15 at a reception hosted by the Realtors Association of the Palm Beaches and the Legal Aid Society of Palm Beach County Inc. For contest rules and information, visit pbcgov.com/equalopportunity/ or call Kathi Dillard at 355-4927.

Christine Davis is a freelance writer. Send business news to her at cdavis9797@comcast.net.