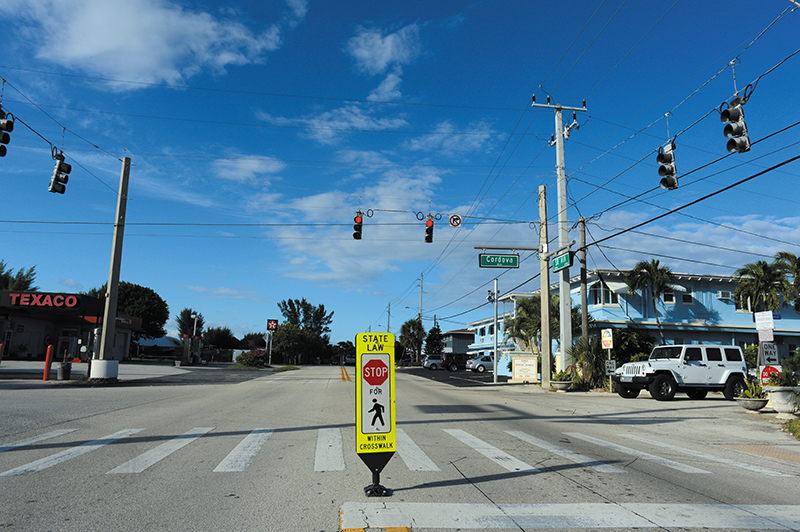 Briny Breezes residents say that having a crosswalk stop at an intersection with a traffic light is confusing. The state may have erred when it put in the sign. Jerry Lower/The Coastal Star

Briny Breezes residents will get the chance to learn a lot more about plans for the Gulf Stream Views townhouse project next door when developers come to town for a question-and-answer session on Nov. 13.
The event, which is open to the public, is scheduled for 5-7 p.m. in Briny’s ocean clubhouse.
Mayor Roger Bennett said he expects Ocean Ridge officials and County Pocket representatives to attend, as well as members of Briny’s corporate board and the Town Council.
“I’m getting a lot of questions and comments from returning snowbirds,” Bennett said during the Town Council meeting Oct. 25. “So everyone’s invited.”
The developers, NR Living, a division of National Realty Investment Advisors of Secaucus, N.J., plan to build 14 three-bedroom townhouse units on a roughly 2-acre site just south of Briny’s boundary line, north of the County Pocket, with pre-construction prices ranging from $1.8 million to $2.7 million.
Briny Breezes Town Manager Dale Sugerman said work to prepare the site for construction has already begun, with trucks hauling in large amounts of fill to “bring the grade of the property up significantly.” The developers have not yet released a work schedule for the project, Sugerman said.
In recent weeks, the Town Council has tried to clarify ownership of Briny Breezes Boulevard, a street that would provide access to the townhouses from the north off A1A. The town appears to own only a part of the 45-foot-wide right of way, Sugerman said, but it remains unclear exactly which part.
“The story gets interesting,” he said of talks with Palm Beach County officials over ownership.
Sugerman says it would appear that Briny owns the northern 30 feet of the right of way and the county owns the southern 15 feet. “However, there is only 18 feet plus or minus of pavement,” the manager said.
It remains unclear whether that 18 feet of pavement is under control of Briny or the county, he said, and that the county’s engineering department is working to resolve the matter.
With the townhome development on the horizon, several council members have said it may benefit Briny Breezes to assume full control of the right of way, if the county is willing to give up its share.
In other business, Sugerman said he is working with the Florida Department of Transportation to determine whether a “Stop for Pedestrians Within Crosswalk” sign belongs in the A1A crosswalk at the Cordova Avenue intersection.
Sugerman said FDOT inexplicably put the sign there recently, not long after the town requested a replacement sign for the one damaged by a motorist in September at the Ruthmary Avenue crosswalk. FDOT installed a new sign at that crosswalk two weeks prior to the Cordova replacement.
Residents have complained that the Cordova sign causes confusion because the intersection has a traffic light to assist pedestrians.
“I agree that there are conflicting commands,” he said, telling the council FDOT plans to examine the sign to see if it is appropriate.