CORRECTION: This story incorrectly describes the hiring of three employees by Briny Breezes. The town received six applications for deputy town clerk, two for bookkeeper and one for meter reader. Town Attorney John Skrandel advised the Town Council that the new clerk should work as an employee of the town, rather than as an independent contractor.

The Briny Breezes Town Council has unanimously approved the hiring of three employees to complete the town’s transition to a team of independent contractors.
Carol Lang, who worked in Briny’s corporate office for three years, will take over as the deputy town clerk; Sue Thaler, the 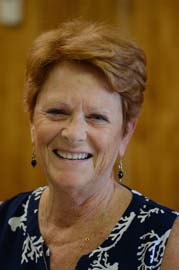 council president, will become the new bookkeeper; and Jim Phillippi will stay on as the town’s meter reader, doing what he has done for years, but under a slightly modified job description.
Town Attorney John Skrandel had urged the council to change the positions to independent contractor status, instead of town staff employees, to ensure compliance with Internal Revenue Service regulations.
Lang replaces Lesa Shoeman, who held the part-time job since September 2012 but did not want to continue under the new rules. Lang, who moved to Florida five years ago from Long Island, N.Y., where she worked as an education program manager for historical properties, will earn $15,200 per year and work in the town office. Last year, Shoeman earned close to $29,000, according to Alderman Barbara Molina.
“Carol has done an exceptional job cleaning up all the files,” Molina said of Lang’s performance as a temporary worker in recent weeks.
“Everything is working out nicely,” Lang said. “The team and I work well together.”
She said Briny’s office will be open from 9 a.m. to noon Tuesdays, Thursdays and Fridays, under the restructured clerk position.
Thaler, a certified public accountant with 35 years’ experience in the field, was an easy choice over another bidder for the bookkeeping job vacated by Linda Harvel, Shoeman’s mother. Thaler will earn $10,200 annually; Harvel earned $9,573 in 2013.
“She’s well-acquainted with what needs to be done,” Molina said of Thaler, “and well-equipped to do the job.”
“She does spend an enormous amount of time in here already,” said Alderman Karen Wiggins of the council president’s efforts to keep track of Briny’s bookkeeping.
In other business:
• Council members unanimously approved the tentative tax rate of $10 per $1,000 of assessed property value, the same as the last two years, at the Aug. 28 meeting. Public budget hearings are scheduled for Sept. 11 and Sept. 25, both meetings starting at 5 p.m.
• The council gave unanimous approval to the first reading of an ordinance that gives Briny’s corporate arm the authority to issue A Row parking permits. The 5-0 vote endorsed the recommendations of the Planning and Zoning Board.
• State Sen. Maria Sachs, D-Delray Beach, has scheduled a property insurance workshop for Oct. 7, beginning at 1 p.m. in the Briny Breezes Clubhouse.
Consumer advocates and representatives from several state agencies, including Citizens Property Insurance Corp., are expected to participate in a panel discussion that should be of particular interest to Briny residents. As Citizens has tried to rid itself of high-risk properties in recent years, thousands of trailer park residents across the state have found themselves with soaring insurance bills or no coverage at all.
Sachs says Briny residents will get the chance to question state officials directly about insurance issues during the workshop. Ú