Sally Long and her mother-in-law Joanne Long evacuate their residences in Briny Breezes Nov. 9 before the arrival of Tropical Storm Nicole. The family left the park after mandatory evacuation orders were issued the previous afternoon. Tim Stepien/The Coastal Star

As Tropical Storm Nicole continued making its path westward toward the Florida coast this week, residents in Briny Breezes weren’t waiting around for it to achieve hurricane status.

Most of the 600 residents of Briny Breezes evacuated their coastal mobile home community ahead of the storm, officials said. And those who waited until Wednesday, Nov. 9, to leave were forced to deal with severe flooding.

The few holdouts who have decided to stay got another challenge when a transformer malfunctioned, leaving 255 mobile homes on the west side of town without power until either late Thursday or early Friday, Mayor Gene Adams said.

“My hope is the power being out pushes people to leave,’’ said Adams, who was among the Briny residents who chose to leave town until the worst of the storm passes.

Palm Beach County officials had ordered evacuations of mobile homes and the barrier island ahead of Nicole’s approach. The storm was packing 70 mph winds as of the 4 p.m. Wednesday advisory from the National Hurricane Center. 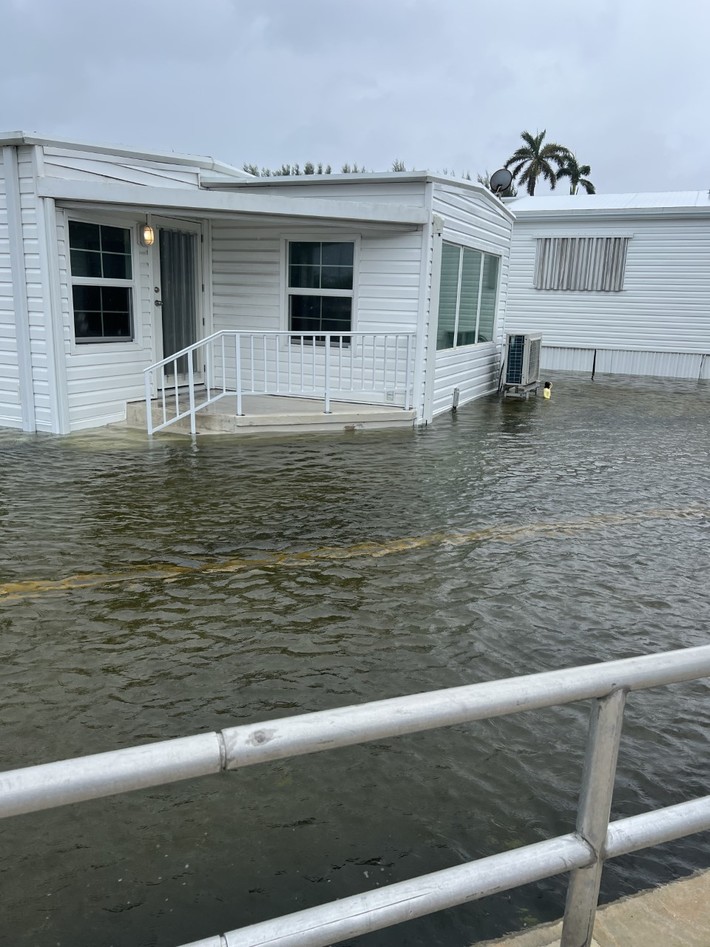 Water rises to porch level of a home along the marina in Briny Breezes during high tide on Nov. 9, but the lights stay on. Photo provided by Joanna Malin

Wednesday’s king tide flooding, combined with rain squalls from Nicole’s outer bands, left up to 3 feet of water in many places across the west side of town by 10 a.m. That water receded a few hours later, with help from pumps.

But more water was expected to flush back into town by Wednesday night, thanks to the one-two punch of a full moon and the intensifying winds, rains and storm surge of Nicole, which is expected to be a hurricane when it hits Florida overnight – likely to the north of Palm Beach County.

“We had a lot of flooding this morning. It was bad, no question about it,’’ Adams said Wednesday afternoon.

“The worst of the flooding is probably going to be later tonight. The push from the storm is the problem more than the high tide. The high tide itself is not enormous but the storm surge, all of that push coming through the [Boynton] Inlet, is the challenge. Once it breaches the walls on the west side, that's when we get in trouble.’’

Even though hurricane season officially ends Nov. 30, most Briny residents started arriving back in town during the first week in November. They took down their hurricane shutters and prepared for a relaxing winter.

But when Nicole’s wide winds took aim at Palm Beach County earlier this week, residents scrambled to put the shutters back up and make evacuation plans.

“I couldn’t believe it. It was so late in the season. We had just gotten down the Saturday before from South Carolina. We’d just opened the shutters and then two days ago (the forecast path) made a tick south, and I put the furniture back in and closed the shutters again,’’ said Sally Long.

For most residents, the reaction was the same when they flipped on The Weather Channel this week: A hurricane in November?

Long and at least five other town residents evacuated Wednesday and are staying with a friend in Boca Raton. Although the storm is not expected to exceed category 1, she knows they made the correct decision.

“I watched Hurricane Ian intently – and the destruction and the change in paths and all the dangers that were inherent with that hurricane – and decided, you know, we are on a barrier island in a mobile community and we need to be safe,’’ she said.

“It was a blessing for all of us who watched [Hurricane Ian] to know what the devastation could be and to really take the storm seriously,’’ Long said. “You can take the little bit of worry of taking the patio furniture in and shuttering up or you can live through the devastation and have a lot of stuff to clean up.’’

A few streets down, Chuck Foland, 90, had just arrived back in town from a summer in Ohio less than a week ago, only to be forced out to a nearby hotel by the rare November storm.

“My brother opened this all up for him last weekend. Then came the hurricane,’’ Foland’s son, Craig, said. “I was like, ‘Give me a break.’’’

But Craig Foland, a South Florida resident for 15 years, knows not to take any chances when hurricanes threaten. “You can’t mess with it,’’ he said as he closed a clamshell shutter on the mobile home.

Nicole “isn’t going to be an Ian or an Andrew,’’ he said, “but what I’m worried about is his age and I don’t know how bad these streets are going to flood.’’ 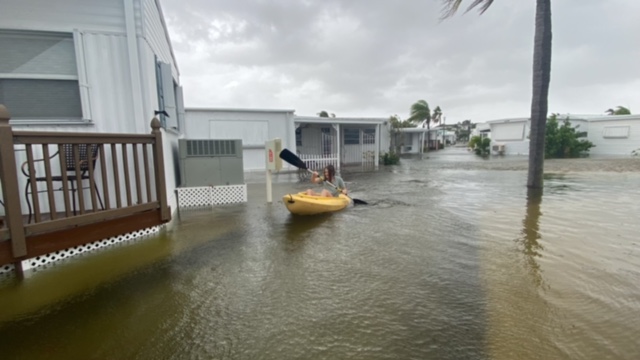 Kayaker Rylee Collin, 15, checks out the mobile homes on the west side of Briny Breezes during high tide. Joe Capozzi/The Coastal Star

By 1:30 p.m., the water started to recede, but residents knew it was likely a temporary reprieve.

The storm’s timing will resonate with Briny residents. On Nov. 15, the town council will host a community meeting to discuss a multimillion dollar resiliency plan for infrastructure improvements aimed at helping Briny Breezes cope with sea level rise.