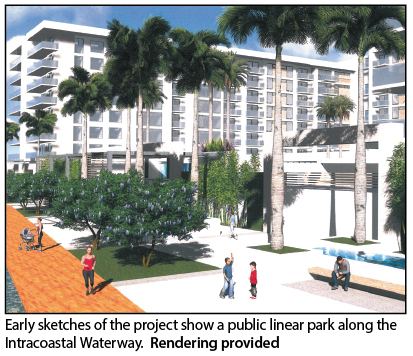 The owner of Riverwalk Plaza expected a quick approval of its redevelopment application in Boynton Beach, but it’s slogging through the process.
City staff compiled 132 comments to Isram Realty’s December application. At the behest of Mayor Jerry Taylor, the two sides met on Feb. 11. Taylor did not see his early intervention before the city staff report was complete as unusual. “I didn’t do anything special,” he said.
The Isram representatives told city staff, “We thought you liked our plan.”
“They were under the opinion that the design and extra height was supported by staff,” said Michael Rumpf, the city’s planning and zoning director, after the first meeting. “But we said the city has design requirements.”
A second, technical meeting was held in mid-February on the details for the mixed-use development. The former Winn-Dixie shopping center at the southeast corner of Federal Highway and Woolbright Road is slated to house a 10-story, U-shaped apartment building with 326 units.
It also will contain 41,970 square feet of retail space, the 7,889-square-foot Prime Catch restaurant and the 2,988-square-foot Wendy’s with a drive-thru lane. The Wells Fargo bank branch will remain, along with a Walgreen’s drug store and Jo-Ann Fabric and Craft Store in a separate building.
Walgreen’s has 42 years left on its lease if the drugstore chain exercises all of its options, said Steven Wherry, Isram’s land-use attorney.
The plaza also contains the Bond and Smolders coffee shop/bakery, Josie’s Ristorante & Pizzeria, Sushi Simon and Rice Fine Thai & Asian Fusion that Isram will either relocate within the new project or buy out their leases.
The 9.8-acre complex sits in a zoning district that allows building heights of seven stories, but Isram wants to build 10. The Planning Department would consider some extra height if the developer put in what Boynton Beach planners are calling “view corridors.”
But Isram objects to redesigning the whole project, because of the cost involved, Wherry said. “We need to build higher to allow upper floors to get an ocean view,” he said.
Wherry also said the tall building would not block anyone’s views or create shadows on nearby properties. As to the precedent it would set for others who want to construct tall buildings along the Intracoastal, he said residents can vote out the commissioners who approve those plans.
Isram will submit an addition that calls for a 4,500-square-foot retail building just north of Walgreen’s on Federal to address the staff’s concerns about limited retail along Federal, Wherry said.
The developer also will create a public linear park along the Intracoastal Waterway, Wherry said. Art festivals and other similar activities could be held there, he said.
The Florida Coalition for Preservation, a grass-roots group that promotes responsible development, held two meetings in late February for members of its newly created Boynton Coalition for Responsible Development. The Boynton Coalition represents 3,500 Intracoastal residents. The meetings focused on the Riverwalk Plaza redevelopment.
Wherry and Mati Rikman, Isram president, saw the flyers about one meeting at the Crown Colony Clubhouse and decided to attend, Wherry said. They tried to stay in the background, but Kristine de Haseth, executive director of the Florida Coalition, noticed them.
When asked why 10 stories, Wherry said, “The city is asking for it. They want a high-density building filled with people who will use mass transit.”
The other choice, Rikman said, would be to have a Whole Foods or other grocery store as a tenant there, which the Boynton Coalition members liked, according to de Haseth.
Isram Realty will keep tweaking its plan for the 10-story apartment building with the hopes of going to the city’s Planning and Zoning Board in May and then onto the City Commission in June.
If its current plan is not approved, Wherry said, Isram has a backup measure: Company founder and Mati’s father, Shaul Rikman, said he would freshen up the grocery store to find a new tenant, restripe the parking lot and let his grandchildren worry about it.