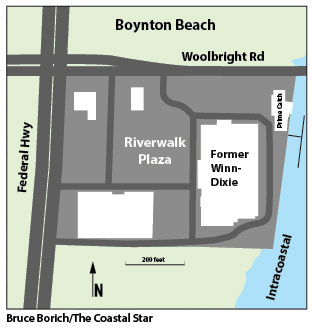 The Winn-Dixie grocery store’s absence from Riverwalk Plaza cleared the way for the center’s owner to plan a better use of the nearly 10-acre property. The 119,199-square-foot shopping center sits along Woolbright Road, from Federal Highway to nearly the Intracoastal Waterway, in Boynton Beach.
“It will be a mixed-use project of residential and retail space,” said Brahm Scoler, leasing vice president for Isram Realty Group, which bought the property for $9.5 million in March 2011.
“We just got control of the Winn-Dixie space,” he said in mid-April. “There are a bunch of moving parts, tenants that have to be moved into another space.”
Scoler declined to discuss details about the proposed project, saying it was in the preliminary stages and “we are working with the CRA (Community Redevelopment Agency) about what will be allowed there.”
But Baruch Cohen, Isram’s chief operating officer, did show preliminary drawings to his neighbor, the owner of the Prime Catch restaurant. That family company owns a triangular-shaped swath of land on the east side of Riverwalk Plaza.
“They have said they would like to create a project that will complement our existing restaurant,” said Prime Catch owner Luke Therien. The upscale seafood restaurant is approaching its 11th anniversary there in June.
“We believe if the center is planned and designed properly, it could be a benefit to this section of Boynton Beach.”
Therien described Riverwalk as a “very old center, very antiquated and not the best use of that property. Boats going by look at the backside of the center. Now with the Winn-Dixie gone, it’s partially empty.”
The colored drawings he saw depicted buildings of five or six stories, Therien said. His request to hold on to them was denied. His company owns the land to the waterfront and he thinks a business arrangement with Isram can be worked out to provide access to the Intracoastal Waterway.
Isram Realty bought the center from Woolbright Development in a short sale, meaning the owner owed more money than the property was worth. Woolbright had paid $16 million in April 2007 and taken out a $14.75 million mortgage on the shopping center site and a vacant 3.3-acre parcel behind it. Isram’s $9.5 million purchase included that vacant piece of land.
Isram will have to get the property rezoned and have its land use changed.
Boynton Beach has four levels of mixed-use zoning, according to its Development Director Nancy Byrne. At the highest level, the developer would be able to request 80 units per acre and have a 15-story building.
The 500 Ocean project, on a parcel slightly less than 5 acres, received approval for 341 units in five- and six-story buildings.
Isram will have to do a traffic study because it is requesting a land-use change from commercial to partial residential, Byrne said.
That study would please Kristine DeHaseth, executive director of the Florida Coalition for Preservation.
The nonprofit group is concerned about quality of life and environmental issues created by continued development of South Florida’s barrier islands and coastal communities.
She points out that Boynton Beach Fire Rescue station No. 4 houses the first responders for the southern half of Ocean Ridge and Briny Breezes.
“The goal is to protect the response time of the fire rescue workers,” she said.