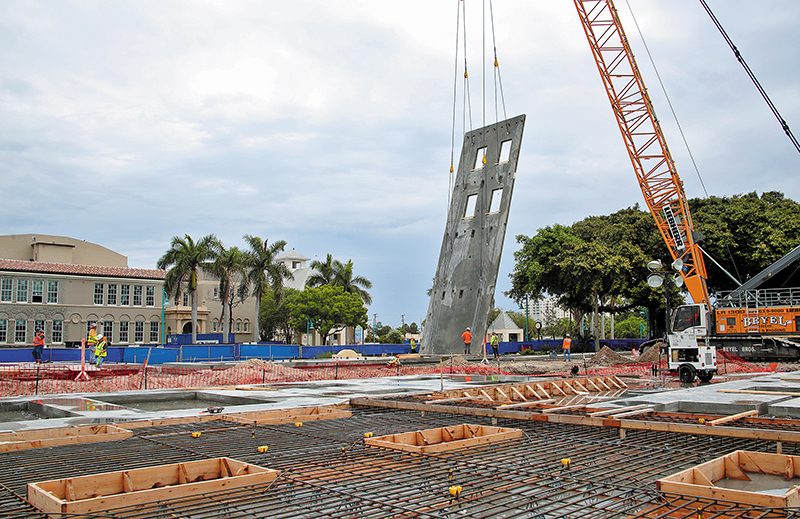 A prefabricated four-story wall is lifted into place at the site of the old community center, across from the restored high school (far left) and Schoolhouse Children’s Museum. Tim Stepien/The Coastal Star

After 20 years of talking and planning, another three hours of delays seemed appropriate as residents waited to watch the first City Center wall go up in the Town Square project that officials hope will create a downtown for Boynton Beach.
“It’s like waiting for Christmas,” said Allan Hendricks, a landscape architect who lives in Boynton Beach. He was waiting for the 330-ton crane to slog across the muddy field on a rainy mid-June morning.
Thuy Shutt, assistant director of the Boynton Beach Community Redevelopment Agency, amazed a small group with her knowledge of concrete and how prefabricated walls can make the building process go quickly. She’s an architect by training.
“Everyone in my office asked where I was going,” Shutt said as she rushed out the door for the wall-raising. She was dressed for the rainy weather in black rubber boots.
Boynton Beach’s elected leaders and city officials have talked about needing a city center, an official downtown, for about 20 years. Without a downtown plan and incentives, developers went to the Congress Avenue corridor for housing and retail opportunities.
The “Tilt Wall” event was promoted on social media and drew a small crowd of adults and children.
City and CRA staff attended, including the city manager, library director, public art manager, recreation and parks director and development director. The mayor and two city commissioners were there, along with a past mayor and his wife.
“What you’ll see today,” said Colin Groff, assistant city manager in charge of the Town Square project, “are four-story interior walls being raised. Then, the two-story exterior walls will be raised.”
They are put together like Tinkertoys, he said.
The crane was able to raise an 82-ton, four-story wall by using four long cables that were attached at eight lift points.
The City Center will house the Boynton Beach government offices and the city library in a four-story building with 110,000 square feet.
The building is part of the $250 million Town Square project, a public-private partnership between Boynton Beach and E2L Real Estate Solutions. The city’s estimated share is $118 million. The 16-acre area is bordered by Boynton Beach Boulevard on the north and Southeast Second Avenue on the south.
The City Center will be finished in May 2020, Groff said.
The renovation of the historic high school will be done in October. Its deadline was pushed back so that it won’t open before it can be used for arts and cultural classes and banquets. Right now, the area has limited parking until a six-story garage can be built just south of the City Center.