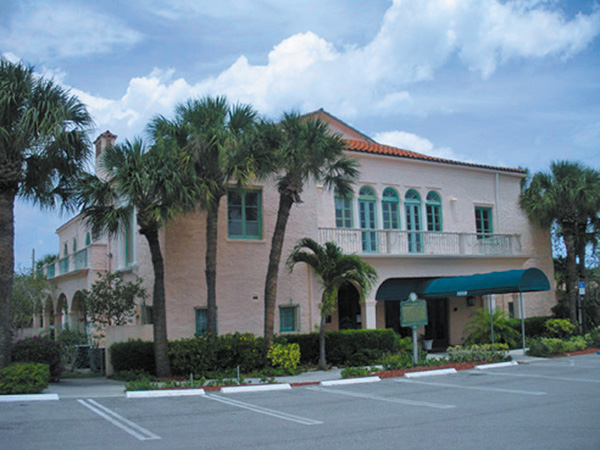 Woman’s Club members praised the proposed $110,000 sale of the building to the city.

The grand old dame will be in good hands with the city’s Community Redevelopment Agency.
Board members agreed in June to pay $110,000 for the 91-year-old Boynton Woman’s Club building, designed by famed architect Addison Mizner.
The club will use the money to continue its 40-year-old scholarship program for high school seniors to further the memory of Major Nathan S. Boynton.
“Our building belongs with the city,” said Pat Waldron, the club’s historic preservationist. “We are delighted an agreement has been made where the site will remain a memorial to Major Boynton, the founding father of the city, and the future leaders of the community will benefit through the scholarship trust.”
Boynton Beach city commissioners sit as CRA board members. They all were enthusiastic about the deal.
“Thank you for the opportunity to let us have the building,” said Steven Grant, board chairman.
“Thanks for taking care of it for us,” said Joe Casello, a board member.
The agency had the Mizner building appraised in May by Anderson & Carr. That appraisal valued the property at $2.4 million.
That amount went over well with board member Christina Romelus because the agency is often criticized for selling properties at a loss.
In 1925, Boynton Woman’s Club members used $35,000 from Boynton’s heirs to construct the two-story building with hardwood floors, French windows and doors, and curved arches. Mizner agreed to donate his plans and supervise the construction as long as quality materials were used and the building’s worth was more than $50,000.
The next year, the structure opened. It serves as a fine example of the Mediterranean Revival style of architecture with original wrought ironwork. The 16,262-square-foot building sits on the National Register of Historic Places and the city’s register of historic places.
“It’s a nice piece of property,” said Warren Adams, the city’s historic planner. “It’s better than letting it go to a private owner.”
The ideal thing is to keep using the building, Adams said, and to keep up with the maintenance.
“This is a win-win situation for the community and for the club membership,” Michele Walter, the club president, said after the meeting. “The historic building, which was built in 1924-1926, will continue to serve the community while having its historic value and history remain for future generations.”
The building houses a ballroom, library and dining room and can be rented for both community and private events. The Woman’s Club will continue to hold its monthly luncheons and business meetings from October through May.
The historic building sits on the eastern side of Federal Highway, just north of Woolbright Road. The agency will close on the building later this summer. Initial plans call for short-term rentals to be done by agency staff and then seeking a professional management company to operate the building.
The Woman’s Club volunteers will continue to lease the property until the agency takes ownership. They have booked $23,750 worth of events for the rest of the 2017-18 period. Annual operating costs are estimated to be $90,000.