The Boynton Woman’s Club made an impressive move almost a century ago, when it left its original Ocean Avenue location for a clubhouse designed by famed Palm Beach architect Addison Mizner.
At the time, back on Ocean Avenue, students were attending the Boynton School. The new high school next door — then at the western fringe of town — was a year away from opening. Just east of the schools, the Jones and Magnuson families were enjoying their recently built homes.
Those two schools, the clubhouse and the homes from Boynton’s past are still part of its present, with all but one of them receiving significant renovations and repurposing for the modern era:
• The 1927 high school building reopened in October as the Boynton Beach Arts & Cultural Center.
• The 1926 Woman’s Club building, whose ownership transferred from the Community Redevelopment Agency to the city in March, is being marketed as a venue for weddings, parties and other social events.
• The 1913 Boynton School has operated as the Schoolhouse Children’s Museum & Learning Center since 2001.
• The 1924 Jones cottage was moved by the CRA to a different spot on Ocean Avenue in 2011 and has since been home to several restaurants. It may reopen this year with new culinary fare.
• The Magnuson house, built about 1919, faces a less certain future. Hopes of turning it into a restaurant, brew pub or other gathering spot have been all but erased given the cost of the restoration work that would be needed.
Still, Boynton Beach has not been quick to give up on its history. The five buildings have all been owned at some point by the city or its CRA, which have sought to have them preserved and incorporated into downtown redevelopment.

Boynton School (Boynton Elementary School)
The Schoolhouse Children’s Museum was one of the city’s first major history-saving projects on Ocean Avenue. The city received the building from the school district in 1994. That same year, the school joined the Boynton Woman’s Club on the National Register of Historic Places, the only two Boynton structures on the list. 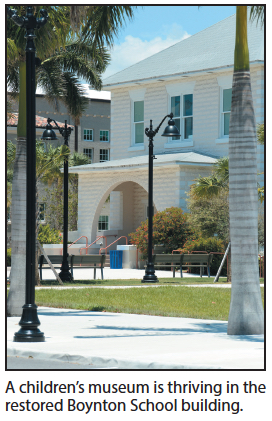 City officials in the 1990s could see how Old School Square in Delray Beach was helping turn around that city’s downtown — anchoring the redevelopment of Atlantic Avenue. They sought to use their old elementary school for Boynton’s own downtown rejuvenation and embarked on a $14 million restoration of the two-story structure designed by Baltimore architect William Maughlin.
The city kept the school’s focus on children. The nonprofit Boynton Cultural Centre operates the downtown museum at 129 E. Ocean Ave. Interactive exhibits teach children about the area’s past, including the city’s first hotel, the exploits of the Barefoot Mailman and how the arrival of the railroad fueled South Florida’s growth.
The museum was selected this year for a $100,000 grant from Impact 100, a women’s charitable organization that funds nonprofit initiatives in South Palm Beach County.

Boynton Woman’s Club
Fortune smiled on the Boynton Woman’s Club in the 1920s when it decided to build a new clubhouse to meet its need for more space. The family of Maj. Nathan Boynton, the city’s namesake, had been looking for a way to honor the major and pledged $35,000 — more than $500,000 in today’s dollars — in his memory toward the building’s construction. 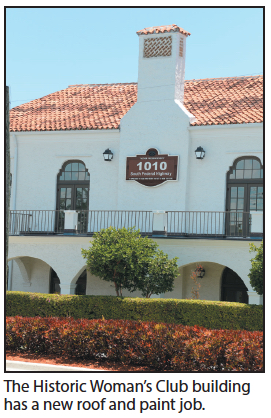 Mizner, meanwhile, donated his design services to the project.
Built in the architect’s now-famous Mediterranean Revival style, it also included features designed specifically for the Woman’s Club. Its low-rising, wide stairs, for instance, made it easier for women decked out in elegant gowns and other finery to ascend to the second-floor ballroom.
In 1979, the building at 1010 S. Federal Highway earned a spot on the National Register of Historic Places, a first for the city. It is the only Mizner building in the city.
The Woman’s Club sold the building to the CRA for $110,000 in 2017 because the cost of upkeep had become too great for the organization. The building is now called the Historic Woman’s Club of Boynton Beach.
“It was our identity. We poured so much into it and I don’t just mean monetarily,” former club President Kay Baker said. “They poured their hearts and souls into getting this building built, then modernizing it and keeping it there.”
Historic preservation wasn’t part of the club’s original mission, though preservation work took up increasingly significant amounts of the club’s time and resources in recent decades.
“Our focus is on education, giving scholarships, charitable contributions. It was difficult having that focus and also maintaining the property,” Baker said.
The CRA, in deciding to transfer ownership of the building to the city, committed to spending $250,000 a year for the next three years for additional repair work in and around the building. In May, the CRA agreed to also pay up to $87,000 to cover the professional design costs of those improvements.
The CRA previously spent about $700,000, including $127,000 in grants, on a new clay barrel-tile roof, refinishing the wood floors, painting the building and other improvements.

Old Boynton High School
The $10.6 million renovation of the original Boynton High School building into the city’s arts and cultural center is part of the ongoing Town Square development that includes a new city hall — named City Center — across Ocean Avenue from the school. 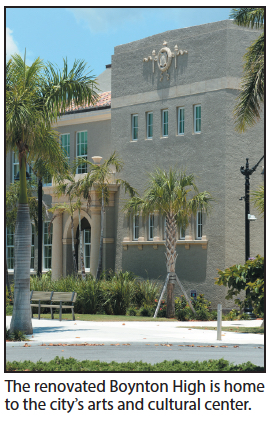 The building served as a high school until 1949, and later as a junior high and then an elementary school before closing in 1990. It was added to the city’s list of historic places in 2013, but stayed vacant until the arts and cultural center opening.
Some rooms remain to be restored in the historic building at 125 E. Ocean Ave., but its luster is back already. The transformed main hallways on the upper and lower levels are now exhibit space. Remodeled and combined classrooms are used for art and dance instruction.
The southern yellow pine ceiling of the second-floor gymnasium has a new roof overhead and vinyl flooring tile underneath, which replaced the gym’s original, unsalvageable hardwood flooring. The city eventually plans to rent out the gym — which was also the school’s auditorium and includes a stage — for events.
Sue Beaman spent a lot of time in that gym. Beaman and her brother, Pat McGregor Murphy, were members of the Class of 1949, the last high school graduating class at the school. Their graduation took place in the gymnasium, where Beaman doesn’t think she missed a single one of the school’s basketball games.
“It was just good being out with the other kids and having fun,” Beaman said. “High school kids during that time had little recreational opportunities other than basketball games and going to the beach.”
Beaman remembers the school as “a wonderful place” and is grateful to everyone involved in giving new life to the building that she said “was within a tiny minute of being destroyed.”
An official grand reopening has not yet been scheduled, city officials said. The center currently is hosting an art exhibit, Upcycled Fashion. It features the works of two artists who take discarded materials — including plastic bottles and tire inner tubes — and create art and wearable garments. The exhibit runs through June 25.
The recent work on the school wasn’t its first restoration. That came little more than a year after it first opened, after the Hurricane of 1928 badly damaged the building and caused the gym walls to collapse, injuring people who were sheltering inside from the storm.
“The building is significant architecturally as it is a fine example of the Mediterranean Revival style of architecture combined with elements of the early Art Deco style,” Michael Rumpf, the city’s development director, said in an email to The Coastal Star.
After the hurricane damage, there was an effort to retain the building’s character and style, Rumpf said. “Both the original design and reconstruction of the damaged building was attributed to William Manly King, the architect of many Palm Beach County schools and other notable buildings,” he said.

Oscar Magnuson House
The CRA attempted without success to find a restaurant or other use for the two-story Magnuson house at 211 E. Ocean Ave. The house’s future looked promising in 2016, when a Philadelphia entrepreneur bought it with plans for a restaurant, but the CRA took it back two years later after the project fell through.
Renovations will be expensive, and no one has been willing to take on the task. 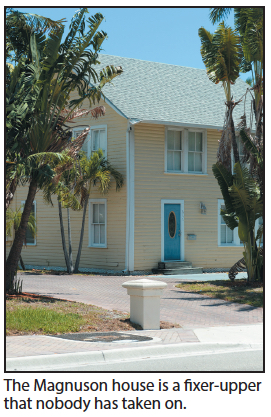 City commissioners, who serve as the CRA board, have decided to let the house be for now, at least until something happens with the land. Demolition has not been ruled out.
“The CRA has made numerous attempts to dispose of the property for reuse/redevelopment purposes via the Request for Proposal process,” CRA Executive Director Michael Simon said in an email to The Coastal Star. “However, once a selected entity performs their due diligence and determines the large amount of money needed to convert the residential building to a commercial use such as a restaurant, they terminate their interest. Future plans for the property will most likely involve its participation in the redevelopment of the adjacent parcels under a larger project scope.”
The Magnuson house was added to the city’s list of historic places in 2012. It is built in the frame vernacular style, just like the Jones cottage. Both are examples of local homes during Boynton Beach’s pioneer days. The Magnuson house was also used as a commercial plant nursery in the 1980s.

Ruth Jones Cottage (Little House)
The Jones home, built at 201 E. Ocean Ave., now sits as vacant restaurant space at 480 E. Ocean Ave. It is also referred to as the Little House, the name of the first restaurant that it contained, or the Ruth Jones Cottage — although Ruth didn’t marry into the Jones family until the 1940s.
The now privately owned cottage has an addition attached to it that makes it more functional as a restaurant. The building still bears the name of the last restaurant to operate there — Chez Andrea Gourmet Provence, a French restaurant with the unfortunate luck of opening in February 2020 just as the pandemic struck. It closed its doors in January. 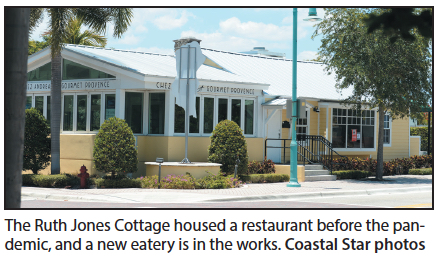 Property co-owner Richard Lucibella, a former vice mayor in Ocean Ridge who purchased the building from the CRA in 2016 with Barbara Ceuleers, said he expects a new restaurant to be in operation later this year.
“We’re entertaining three or four lease offers,” Lucibella said during a May 12 interview with The Coastal Star. “I think we’re going to have a lease signed in the next 30 to 60 days, and an operating tenant by the end of summer.”
As for the building itself, Lucibella said he plans to make sure its exterior continues to exude its century-old feel. The building doesn’t have an official historic designation, he said.
“It’s still the Ruth Jones Cottage. As owners, we’ll always control the general look of the outside,” Lucibella said. “It’ll remain the look of the little yellow cottage, I can guarantee you that.”