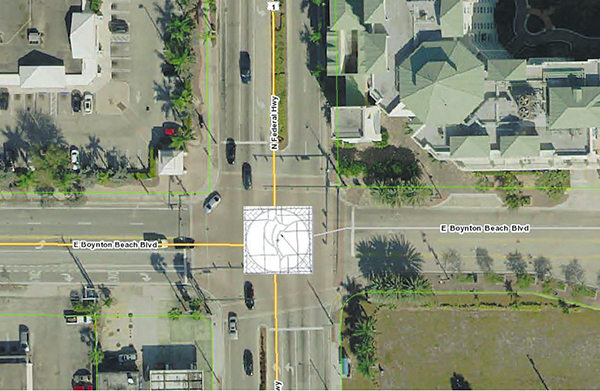 Boynton’s CRA voted 4-1 to pay for sailfish logos as part of the state’s upgrade of Federal. Photo illustration provided

Boynton Beach will beautify five key intersections along Federal Highway with city logos that feature a sailfish.
The state Department of Transportation is paying to redo Federal Highway. But Boynton Beach will pay for the cosmetic upgrades such as the logos.
City commissioners, sitting as the Community Redevelopment Agency board, agreed by a 4-1 vote to pay for the logos at Gateway, Martin Luther King Jr. and Boynton Beach boulevards, Ocean Avenue and Woolbright Road.
“Staff is bringing this to you because state DOT is paying to resurface the road and add pedestrian and bike lanes,” CRA director Michael Simon said at the board’s April 10 meeting. “We don’t have any other option with DOT. We are not doing the work on our own.”
Materials have not yet been selected, but board member Joe Casello was concerned that the logos would fade over time under the harsh South Florida sun. He thinks the money could be better spent in the district and voted against the expense.
Mayor Steven Grant said he wants to know which direction the sailfish should point as drivers on Federal Highway see them.
“I think on Ocean, the sailfish should be pointed to the beach,” said Susan Oyer, a fifth-generation resident and member of the city’s Planning and Development Board.
Simon told the agency board members that they must decide whether they want to pay to add the logos, estimated to cost about $55,000 per intersection. The amount includes a 20 percent contingency fee for cost overruns.
The design details — such as the colors, the orientation of the sailfish and materials used to create the street logos — will be presented at a future meeting, said Thuy Shutt, assistant agency director.