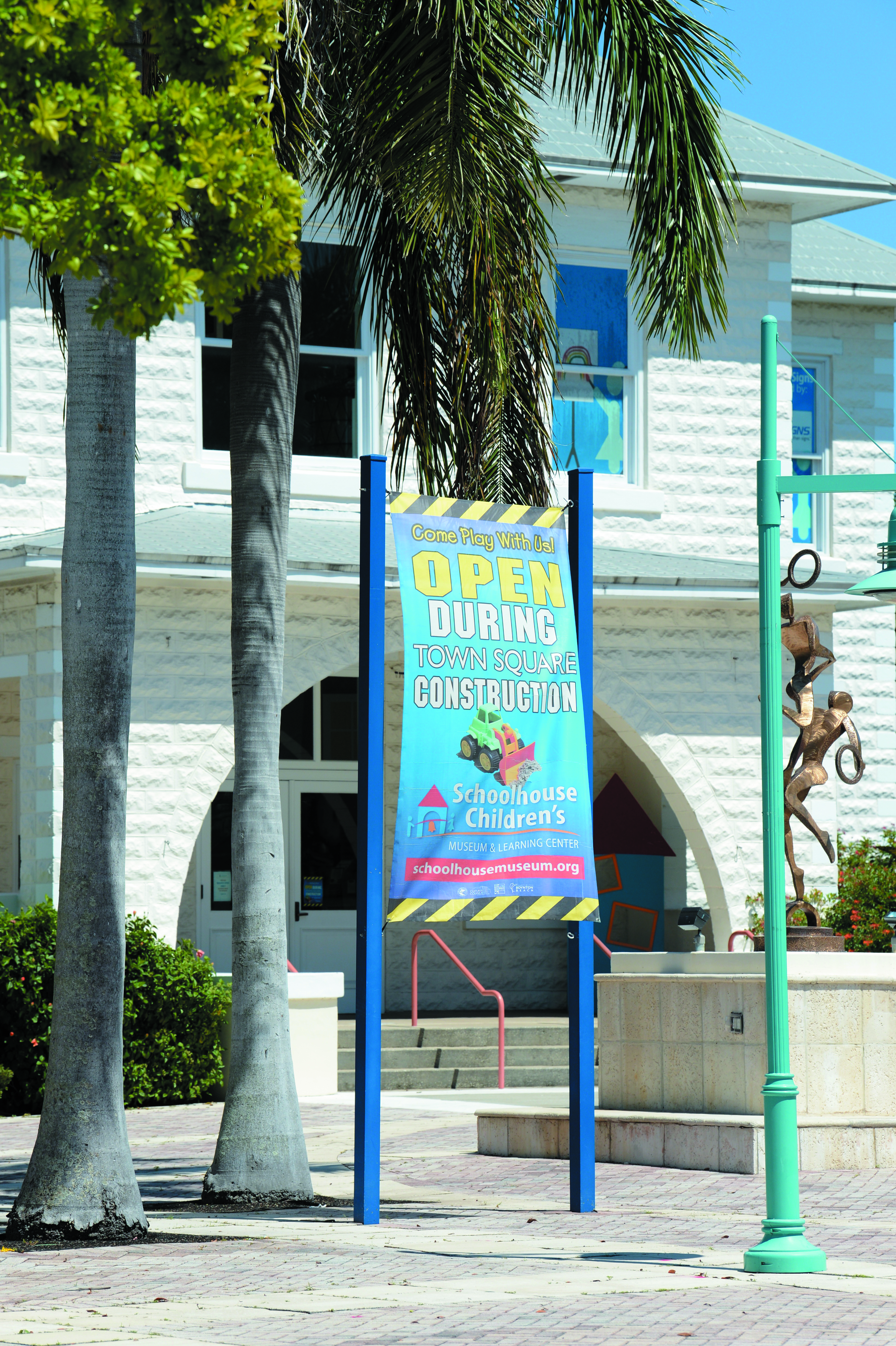 Cars can reach the museum from the east when Ocean Avenue is torn up. Jerry Lower/The Coastal Star

Playtime hasn’t stopped even as work continues on building Boynton Beach’s new Town Square.
The Schoolhouse Children’s Museum & Learning Center is open throughout construction of the municipal facilities, with signage to remind visitors.

“There’s no question that our operations have been affected by the exciting project that is Town Square,” Suzanne Ross, executive director, told the City Commission in February. “So far, we’re holding our own.”
While first-quarter visits were down about 6 percent when compared to the same period in the previous year, the museum also received two grants totaling $37,000, Ross told the commissioners.
“That will allow the museum to end the first quarter in the black,” she said.
The city-supported museum sits on Ocean Avenue between Seacrest Boulevard and Southeast First Street. In the current financial year, the city will give $255,169 to the museum, up slightly from the previous year.
Boynton Beach also owns the 1913 schoolhouse building, which is listed on the National Register of Historic Places. A nonprofit, Boynton Cultural Centre, runs the museum. It now is the only open building on that block.
The museum, open Tuesdays through Saturdays, provides interactive play with a mix of local history for young children, ages 3 to 8.
“We want them to play and wonder,” Ross said.
On April 29, the city is scheduled to begin tearing up that Ocean Avenue block as part of the $118 million Town Square, a 16-acre project that will create a downtown. New water and sewer lines will be added, along with stormwater drainage lines before the road is built up and paved.
The roadwork will be done in two phases, said Colin Groff, assistant city manager in charge of the Town Square project. The western half will be done first, then the eastern half. He estimates the work will be finished by July 5.
“We will add signs, move signs, to make sure the public knows the Schoolhouse Museum is still open,” he said.
Banners recently were added to the Town Square construction fences at key intersections along Boynton Beach and Seacrest boulevards, Ross said. A banner in front of the museum reads: “Come play with us! Open during Town Square construction.”
“The city supports us financially,” said Joy Woodworth, a museum board member who lives in Boynton and is a retired college educator. “It makes sense that when they close Ocean Avenue they would direct patrons to us.”
The city’s old high school, which sits just west of the museum, is planned to open later this year as a cultural center. Arts and dance classes will be held on the first floor and an auditorium will occupy the second floor. The renovation will cost $11 million.
The 1927 high school is on the city’s list of historic properties.
Boynton Beach partnered with E2L Real Estate Solutions to create Town Square, which will have office and retail and restaurant space, apartment buildings and a hotel in the second phase. The total project cost is estimated at $250 million.
Across Ocean Avenue, the development team is building a four-story City Center to house the city departments and library.
In the meantime, the museum board is planning its annual fundraiser for April 11.
The event at Benvenuto Restaurant in Boynton Beach will honor Nain and Curtis Weaver. The couple attended elementary school in the building and were among the museum’s founders, Ross said.
The Weaver family raised dairy cows on land near Boynton Beach Boulevard and Military Trail.
The fundraiser, titled “Schoolhouse Bash — Too Cool for School” runs 5:30-9:30 p.m.
“It’s a dinner dance with a twist,” Ross said. Attendees are encouraged to wear clothes from their favorite era of school, although it’s not required.
“It’s not a formal event, not even semi-formal,” she said. “We just want people to have fun.”
Tickets are $125 each and are available at SchoolhouseMuseum.org.