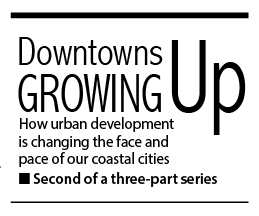 Folks in Boynton Beach once envisioned their town’s future as that of a Florida fishing village with a Caribbean theme. Today, that future is high-rises, condos and apartments.

Residents had long favored buildings with a height limit of four stories. The change to allow more height began in the fall of 2015 when a previous City Commission removed two volunteer members from the Community Redevelopment Agency board, allowing the board to consist only of commission members.

Then, in August 2016, the newly elected commission approved the CRA’s updated plans for the eastern part of Boynton Beach. These plans will shape the city’s down-town area for the next 20 years. They call for a wedding-cake tier effect along Ocean Avenue with three stories nearest the street and the potential to build up to seven stories. They also allow for increased height and density at the foot of the city’s two bridges spanning the Intracoastal Waterway.

Longtime residents had expressed support for aspects of the plan such as wider sidewalks, shade trees and better lighting. But they did not support the allowable height increases. The most contentious project approved involved the 10 stories and 326 apartments planned for Riverwalk Plaza at Woolbright Road and Federal Highway.

In addition to the proposed Riverwalk Plaza and the existing One Boynton with nearly 500 apartments at Woolbright and Federal, several apartment projects have been approved near Boynton Beach Boulevard, about a mile north.

The Villages at East Ocean located along the FEC railroad tracks has been approved to build 366 apartments, and the Ocean One project east of Federal Highway can add 231 rental units, with both projects topping out at eight stories. They’ll join the existing 15-story Marina Village with 338 condos and Casa Costa with 14 stories and 395 condos.

Just one block south, the six-story 500 Ocean project recently received another six months to finish. It will have 341 apartments at its scheduled June 30 completion.

“I feel very much like the Riverwalk project was the thumb in the eye,” said Harry Woodworth, 68, former president of the Inlet Communities Association and frequent critic of the growth explosion.

At the raucous August 2016 CRA meeting, supporters of the four-story limit packed the room, wearing white shirts and carrying small signs with the numeral 4 in red. When the plans for east Boynton were discussed, Woodworth said his 500-member group supported everything except the height increases at certain intersections.

Under the old city plan, Riverwalk Plaza (which includes an abandoned Winn-Dixie grocery store) could have sought four stories for an apartment building. Another three stories would have required a special request to the City Commission.

The new plan gives the project 10 stories, which the owners claim they need to rent the upper stories with promises of an ocean view from the west side of the Intracoastal Waterway.

“They totally changed the codes, not just for Riverwalk,” Woodworth said. “It all started in the fall of 2015 when [the previous commission] booted two citizens off the CRA board.”

Buck Buchanan remembers that time and also when the city wanted to create a “Floribbean” fishing village theme. He and former Mayor Woodrow Hay were the two citizen CRA board members whom the City Commission removed under the theory that residents want elected officials to make the decisions.

But the City Commission then faced an outcry and created a public, seven-member CRA advisory board to appease residents who felt their voices weren’t being heard.

CRAs exist to reinvigorate areas that have been blighted or neglected by reinvesting tax dollars back into the area.

“We spent a lot of time reviewing what got other CRAs into trouble, but the commission disregarded what we presented,” Cross said. She believes projects should be customized to Boynton Beach and include more green space and parking garages.

“What will we do in 10 years when the sea level rises and we haven’t planned for it?” she said. “A median and some little plants are not enough.”

CRA advisory board member James DeVoursney sees his service as a way to be involved in the process. At times he has been the lone vote for the public on the normally developer-friendly board, such as in July 2016 when he voted against allowing 10 stories at the Woolbright and Federal intersection. Simultaneously, the Riverwalk Plaza owners sought the same height allowance.

“I wanted to let them go through the proper channels,” DeVoursney said. “It could have been a give-and-take situation, instead of just a give.”

When the CRA plan came to the commission in August 2016, newly elected Mayor Steven Grant and Commissioner Christina Romelus voted against allowing three extra stories at Woolbright and Federal. They lost the vote to Joe Casello, Justin Katz and Mack McCray, who supported the extra height.

Grant, though, supports adding density through an urban-planning concept called transit-oriented development. In Boynton, one goal is getting a commuter train station.

“After the Brightline high-speed passenger train comes through [on the FEC tracks], then Tri-Rail Coastal Link will start,” Grant said. He’d like to see a station built south of Boynton Beach Boulevard.

“There isn’t a magic number of new residents” for getting a Coastal Link stop, said Kim DeLaney, strategic development and policy director for the Treasure Coast Regional Planning Council. The number varies by city and, of course, the more residents you have, the better for commuter rail and nearby businesses, she said.

Even more residents will come with the Town Square development, a public-private partnership planned for western downtown between Boynton Beach Boulevard on the north and Southeast Second Avenue on the south.

It will add about 460 units with an estimated additional 820 residents to an area with roads already congested during the season. Combined with the apartments planned, under construction or already built, that will be an additional 2,134 units with potentially double the residents going over the Ocean Avenue bridge.

That increase troubles those who live on the barrier island, particularly the 1,900 residents of Ocean Ridge.

They worry about traffic congestion on the bridges across the Intracoastal Waterway, the effects on the beaches and emergency response times.

“You can’t add that many people and expect response times to stay the same,” said Kristine de Haseth, executive director of the Florida Coalition for Preservation, which promotes responsible development.

The coalition is hosting meetings for communities on the barrier island to explore options of contracting for emergency services. Building a fixed fire-rescue station on the island failed to attract support because of the cost of fire trucks and land, she said.

Boynton Beach, which provides fire-rescue services to Ocean Ridge, has added six people to the staff at Fire Station No. 1, the closest responding station to the north end of Ocean Ridge, said Glenn Joseph, the fire chief.

The city also is looking into purchasing traffic signal preemption devices that would turn the lights green in the path of an emergency vehicle, Joseph said. That could help reduce response times, he said.

The city’s station on South Federal Highway responds to calls to the south part of Ocean Ridge and to Briny Breezes going over the Woolbright Bridge. Because Riverwalk’s apartments will vary in size from studios to three-bedroom units, it’s feared the bridge could see an impact of an additional 1,460 residents.

Ocean Ridge residents also worry about their quality of life with increased traffic to the beaches.

“It could have a negative impact,” said James Bonfiglio, Ocean Ridge vice mayor. “We’ll have to police the traffic to direct them to Boynton’s Oceanfront Park and the county’s Ocean Inlet Park, keeping them away from the private beaches.”

Meanwhile, west of the Intracoastal, Woodworth is attending fewer Boynton Beach meetings — partly because he is no longer INCA president.

“What’s the point of going to the meetings,” he said. “Where’s the part that the citizens get their say?”