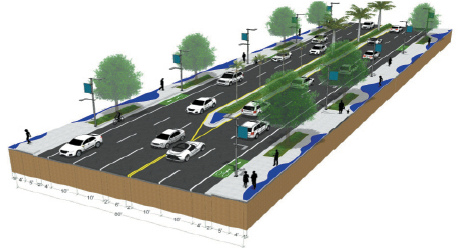 Blue glass beads could be used to create a wave pattern

along the sidewalks and intersections of Boynton Beach Boulevard.

Boynton Beach Boulevard will be beautified to match the up-and-coming downtown the city’s redevelopment agency is trying to create.
In mid-April, the Boynton Beach Community Redevelopment Agency selected one of three designs presented by Kimley-Horn’s West Palm Beach office. The boulevard will have a wave theme to create a cohesive look to the street. It will have wider sidewalks, narrower travel lanes, canopy trees, landscaped medians and dedicated bike lanes.
The waves along the outer edges of the sidewalk can be made using concrete with blue glass beads added or pavers with blue glass beads embedded in the top layer, said Marwan Mufleh, senior vice president at Kimley-Horn.
CRA board member Christina Romelus asked whether the special pavers would cost more. The consultants said yes, but they would present other options for the CRA board to select.
At the Seacrest Boulevard and Boynton Beach Boulevard intersection, pavers can’t be used because a state road is involved, Mufleh said a few days after the CRA meeting. The state is worried that the pavers will crack when vehicles travel across them. The waves in the intersection can be made using a concrete treatment, he said.
Mufleh told CRA board members that Kimley-Horn did pedestrian counts at two places near I-95 along Boynton Beach Boulevard, which is State Road 804. The intersection near Galaxy Elementary did not warrant a crosswalk.
But farther east, the intersection with a Marathon gas station at Northwest/Southwest Second Street had a pedestrian count of 19 per hour, just one shy of the state standard for crosswalks.
Mufleh said he would talk to state transportation officials about putting a crosswalk there.
Kimley-Horn will be paid $557,000 for the design and survey work, which includes getting Florida Department of Transportation approval. It will receive another $3,000 for expenses.
Kimley-Horn will work with Florida Power & Light to bury the power lines so that light poles along Boynton Beach Boulevard don’t have visible wires.
Total cost of the Boynton Beach Boulevard beautification, from the interstate east to Federal Highway, was estimated at $12 million by Michael Simon, the CRA interim executive director.
In three months, the firm will come back to the CRA to present 30 percent of the drawings.
“By this time next year, we’ll be finished,” Mufleh said.