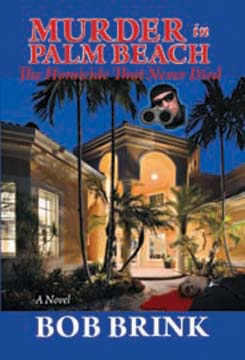 Sometimes fiction makes the best truth.
Bob Brink looked up from his plate of fried mushrooms and smiled at the notion.
“That’s it in a nutshell,” said Brink, a former reporter for The Palm Beach Post and Palm Beach Illustrated magazine. “Sometimes it’s the only way to tell the story.”
Brink has done just that in his book Murder in Palm Beach: The Homicide That Never Died, a fictionalized tale of Mark Herman. He was convicted — wrongfully, by most accounts — in the 1976 murder of Palm Beach oilman Richard Kreusler.
Brink combed through nearly 150 newspaper clippings to help him research Murder in Palm Beach, and had several conversations with the reporter who Brink says was blocked by his employing newspaper from revealing the truth about Herman’s innocence.
“I was going to do a roundup of the players for the 50th anniversary of Palm Beach Illustrated,” Brink said. “The last person I talked to was the reporter who dropped the bombshell about what he had found out. He knew who the real (killer) was but wouldn’t reveal his sources.”
Without the names, of course, there could be no accurate storytelling. Thus, Murder in Palm Beach was born.
In the book, published this past January by Pegasus Books, Brink creates the character of Rodger Kriger, who was allegedly killed by Mitt Hecher, a small-time crook. But did Hecher actually pull the trigger on the shotgun that killed Kriger? What underworld figures and even politicians might have been involved? Did a love triangle lead to the murder?
Remember, Brink, who lives in Boynton Beach, is writing fiction. But for those who were around at the time of the Kreusler murder and Herman’s trial, the lines between fiction and truth run closely parallel.
Brink's fictionalized tale takes readers through some terrific twists and turns en route to a whirlwind finish. In the end, we don’t learn the truth about who killed Kreusler, but Brink said the book should lead readers to realize Herman was innocent.
As an epilogue to the real-life case, Herman was released from prison in 1992 after his sentence was commuted by Gov. Lawton Chiles.
Murder in Palm Beach has been as high as No. 13 on Amazon’s best-seller list for criminal procedure books and also is available at Barnes &  Noble and other online book-selling sites.