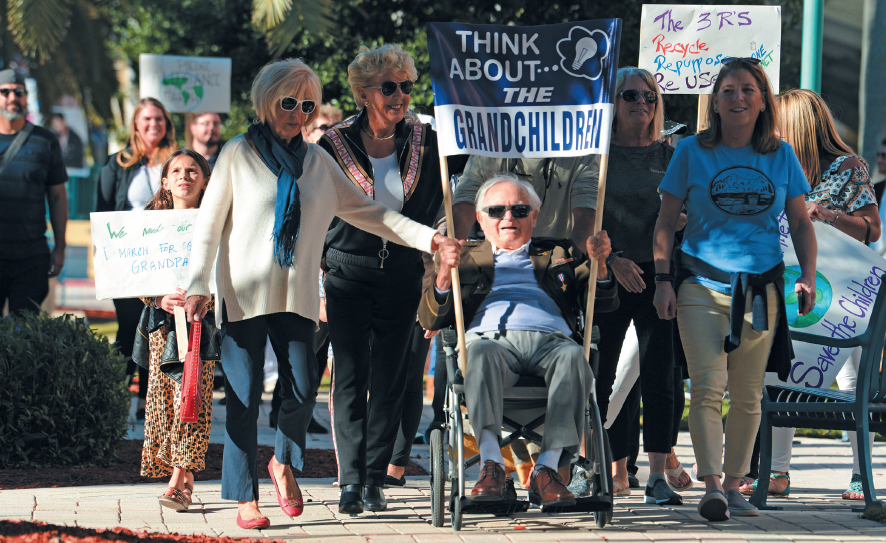 Arthur Metzger is surrounded by family and friends on a parade through Mizner Park ahead of his 99th birthday. The march, which urged residents and politicians to make the planet better, was Feb. 29, before the coronavirus halted such gatherings. Photos by Jerry Lower/The Coastal Star

A small group armed with signs such as “Think About the Grandchildren” marched through Mizner Park in late February, singing and chanting to bring attention to how we should leave the world for those who follow. A 99-year-old World War II veteran led the rally, which coincided with his birthday March 3.
Arthur Metzger, in a wheelchair powered by his son, was joined by his family and friends, all supporters of his wish to urge politicians and residents to do what’s right for coming generations.
“We had little ones from 2 years old to 99 — Arthur — singing these songs and carrying the banners,” said Metzger’s wife, Carole Weller.
After all was said and done, Metzger said he hoped the event, with about 50 participants, made an impact “on some of the politicians who were on the borderline.”
The rally was sparked by a family discussion in Metzger’s living room of the environment and other pressing issues that ended in a challenge by Weller to her husband: “What are you going to do about it?”
“He said he was going to get a sign and walk with it,” Weller recalled. “Every one of us perked up and said, ‘What? What do you mean?’ He said, ‘I think we should do something.’
“He was genuinely worried about the world that we brought our children and grandchildren into,” Weller said, adding that they have a blended family of seven children, 11 grandchildren and six great-grandchildren. “It doesn’t matter the cause — they all needed addressing.”
Weller said that looking at Metzger’s past helps explain his wish to make a better world.
He was born in a small town outside Nuremberg, Germany, to a well-to-do family who fled the Nazis in 1936, arriving in New York City practically penniless. Metzger was 15. He finished high school in America, began working and then enlisted in the Army. When officials there found out he wasn’t a U.S. citizen, they naturalized him.
He took part in the landing at Normandy, France, during WWII and went on to fight in France and Germany until the war ended.
“He was a big hero,” Weller said.
Metzger recalled that during his four-year Army stint, he was promoted to lieutenant by the end of the war and was decorated for his service. His decorations and citations included the World War II victory medal, American campaign medal, European African Middle Eastern ribbon with two battle stars and the bronze star.
When Metzger returned to the United States, he became a pioneer in the plastics industry, building a global company called Amco Plastics International in New York. With his background as self-made — knowing what it was like to be practically homeless and penniless — he became a very charitable man, Weller said. He was involved with a long list of issues, including his children’s education, Jewish causes and politics nationally and locally.
Metzger stopped actively working at his company nine or 10 years ago, remaining as chairman of the board for another five years. The company was run by his son, Gary, until about five years ago, when it was sold.
“Arthur was playing tennis, golf and bridge until he was 92,” Weller said, but failing eyesight, Parkinson’s disease and other ailments caught up with him.
Nothing stopped him from leading the rally, however, and trying to make a difference.
“Our hope was that people along the way would see the signs and think, ‘What are they talking about?’” Weller said.
“Maybe it would dawn on them that we should be thinking about our future and what we should do about it. That was the whole idea. We felt it was successful.” 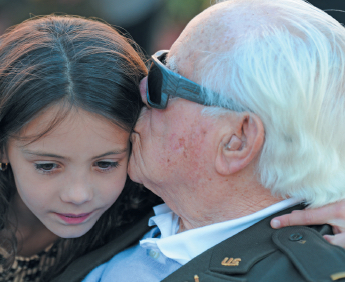 Arthur Metzger kisses his great-granddaughter Ciena Parisi after the march.