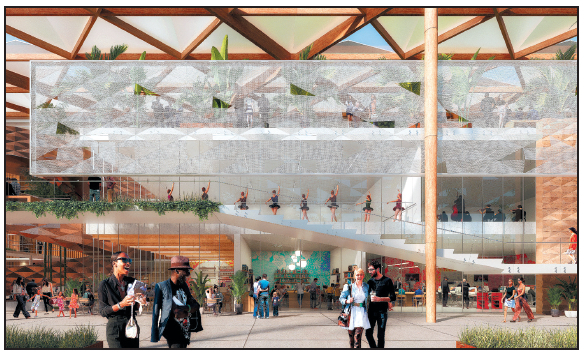 Questions about rising construction costs and the city’s potential liability prompted the CRA to delay a vote on a contract for the proposed center at Mizner Park. Rendering provided

Lawyers for Boca Raton and the cultural arts consortium that wants to build a performing arts center in Mizner Park are spending this month trying to resolve two sticking points in the way of a 94-year lease of city property.
The proposed lease was up for approval at a special meeting of the Community Redevelopment Agency on Aug. 22, but City Council members and city staff balked at using old estimates of the construction cost that did not reflect recent inflation and a demand by the arts supporters that the city be liable for actual damages if it or the CRA were found to be in default.
Instead of voting on the proposal, council members sitting as the CRA decided to table the matter until Sept. 28.
“I really want this to be successful, so that’s why I think this additional 37 days is important to get this right. We need to get this right for both of us,” said council member Monica Mayotte, who chairs the CRA.
As presented, the proposed lease still had a minimum benchmark of $75 million for the performing arts center, despite the fact that construction costs have risen an estimated 30% in the past year.
Andrea Virgin, president of the board of the former Boca Raton Arts District Exploratory Corp., now renamed The Center for Arts and Innovation Inc., tried to reassure council members that the group would hit specified percentages of the construction money throughout the fundraising process regardless of the final dollar amount.
“Whether it’s $75 million or $150 million to build the minimum, that is what we are obligated to do,” said Ele Zachariades, one of the group’s lawyers. “Again, it’s a moving target.”
In the end, Virgin’s group said it would do what it could to produce updated figures.
The debate over whether the city should be liable for actual damages seemed to be at an impasse until the third hour of the meeting when City Attorney Diana Grub Frieser suggested a compromise that the arts group initially rejected.
“We floated the idea of a cap. That was not our first suggestion, but that’s the only place I can see any room,” Frieser said.
Virgin’s group then offered to cap any claim for actual damages to 25% of the value of the arts complex, but council members wanted city staff to vet the implications.
Lawyers on both sides had trouble describing what a possible breach of the contract by the CRA or the city might entail, but Frieser said the city’s “unlimited” exposure would be troublesome.
“Many things will happen in five years, in 20 years, in 80 years that nobody in this room can anticipate. No matter how well-written the contract is, there is no contract that, over that length of time, will not raise issues of uncertainty,” Frieser said.
The $130 million complex to be built on city-owned land on the north end of Mizner Park will include a performing arts center whose venues can accommodate 6,000 people, completely renovated amphitheater, jewel box theater, rooftop terrace and outdoor performing arts spaces.
Virgin said her group already has raised $13 million and has pledges of $25 million to come after the city approves the plan. But she worried about holding those donors to their word if negotiations continue.
“The longer we take to have this vote, the longer I have to keep my donors warm. The job is hard enough. I don’t need indecisiveness, delay to make that harder,” she said.
In other business, City Council members on Aug. 23 repealed the ordinance banning the practice of conversion therapy on minors. They approved a temporary repeal on Aug. 5 after the 11th U.S. Circuit Court of Appeals ruled that the ordinance was unconstitutional.
Council members also approved on second reading an ordinance banning smoking on public lands on the beach and in parks.

— Mary Hladky contributed to this story.