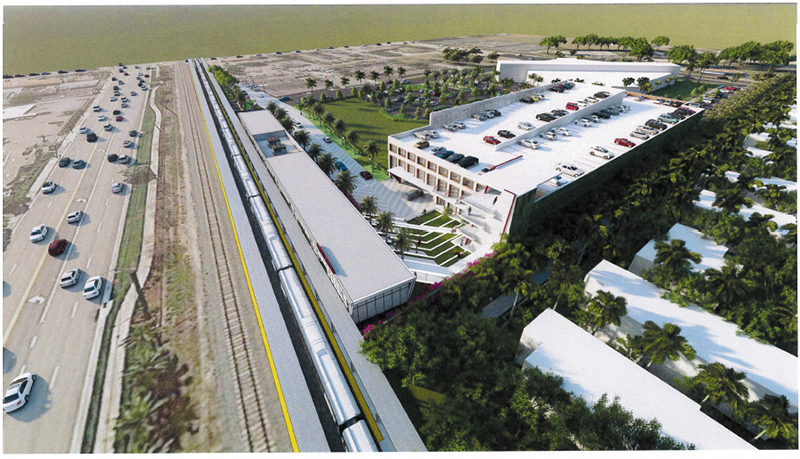 This south-facing image shows Dixie Highway on the left and a vegetative buffer between the proposed parking garage and the Library Commons neighborhood on the right. Rendering provided

Negotiations between the city and Virgin Trains USA on a Boca Raton station are moving ahead at breakneck speed, with the City Council expected to vote Dec. 10 on a final deal.
Under an aggressive schedule requested by Virgin Trains, the council would have voted on Nov. 26. But council members and Virgin Trains officials on Nov. 12 agreed to delay a final public hearing for two weeks to give city staff more time to finalize an agreement and to avoid casting a vote in Thanksgiving week when interested residents might be unable to attend.
Even with the delay, the prospect that an agreement could be wrapped up less than five months after Virgin Trains notified the city it wanted to build a station in the downtown is stunning, considering the city approval process for other projects has sometimes dragged on for years.
All signs point to City Council approval. The city’s Planning and Zoning Board on Nov. 21 unanimously voted in favor of recommending that the City Council approve leasing city-owned land to Virgin Trains for the station and a parking garage. A vote on the station and garage site plan will come later.
“I see nothing but good coming out of this train station,” said board member Larry Cellon.
Four days later at a council workshop meeting, Virgin Trains made two concessions intended to soften criticism from residents who live due north of the station and garage site and to make its proposed agreement more financially attractive to the council.
“Thank you for listening to our residents and making the accommodations,” council member Monica Mayotte told Virgin Trains officials.
Virgin Trains is in a hurry, putting pressure on City Council members who badly want a station. The for-profit rail company wants to start construction in March, with the station in operation by the end of 2020.

City presses on two details
Council members have not objected to the main provisions of the most recent draft agreement submitted by Virgin Trains. Those include a long-term lease of 1.8 acres to the rail company for $1 a year and the city’s paying most of the $13.9 million cost of building a parking garage.
Virgin Trains will pay for the $25 million station on the site east of the Downtown Library and has pushed off into the future its contentious plans to develop about 2 adjacent acres of city-owned land.
Council members pressed for further negotiations on only two matters: They want a 50% share of the parking garage revenues and a minor revision to the garage location so there is a greater buffer between it and the Library Commons neighborhood north of the garage.
Brian Kronberg, Virgin Trains’ vice president for development, agreed at the Nov. 25 workshop meeting to split the garage revenues, but did not specify the amount.
While Library Commons residents and Friends of the Boca Raton Library don’t object to the station, they want the 4.5-story parking garage moved so it doesn’t loom over their neighborhood.
City Council members signaled no interest in a big change to Virgin Trains’ proposed garage location. The majority suggested moving the garage 20 feet south, which would provide a bigger buffer space for Library Commons but still leave land available for potential future development.
Virgin Trains on Nov. 25 agreed to push it 25 feet south. With that, and an existing 20-foot city easement that has a sidewalk and landscaping, there would be a 45-foot buffer between the garage and the neighborhood.
The change will have minimal impact on the number of garage parking spaces. Dedicated free spaces will be set aside for library patrons and they will continue to have no-cost surface parking. The garage also will be available to Virgin Trains passengers and the public.
The parking garage would cost nearly $14 million to build, according to Virgin Trains. The city would pay $12 million and Virgin Trains would pay $1.9 million to cover the cost of the dedicated library parking.
The station is supported by many city residents, including those who commute to work, and key institutions such as Florida Atlantic University, Boca Chamber and the Boca Raton Resort & Club.

Critics claim ‘surrender’
Library Commons residents and Friends of the Boca Raton Library are the main opponents, objecting to a garage so near the library and neighborhood and what they believe is the eventual certainty of multistory residential and commercial development on their doorstep.
At City Council meetings on Nov. 12 and 13, several residents contended that since Virgin Trains wants a station in Boca Raton, the city has leverage to get concessions but isn’t using it.
Manjunath Pendakur, a retired FAU professor, questioned why the city is “giving land away” for $1 a year.
“We shouldn’t be subsidizing this thing,” said another resident.
Library Commons resident Adam Rosenzweig proposed an alternative parking garage location that would place it immediately west of the station, moving it away from his neighborhood while preserving much of the library’s parking lot and green space. His concept would eliminate any future development on the site.
The city’s talks with Virgin Trains are not a negotiation, he said, but rather “a full-blown surrender.”
“We thought we would hear a lot of tough questions from the dais. We didn’t hear any,” said Library Commons resident and attorney Bill Gelin, who said the station and garage are currently positioned in a way that allows maximum development on the city property.
“You didn’t even ask them to come back with an alternate drawing (for the garage). … Why are you so married to their design?” he asked.
Even though Virgin Trains has put development on hold, Library Commons residents and Friends of the Boca Raton Library see it as inevitable since the company has developed property near its stations in Miami and West Palm Beach.
Their concerns were heightened when word spread recently that two privately owned parcels located south of the station site are in escrow. They believe Virgin Trains is acquiring the properties, but evidence presented to The Coastal Star does not show an obvious link to the rail company.
Even so, private property owners have said Virgin Trains has approached them about selling their property, although none who spoke with the newspaper said they had sold as of mid-November.
That raises the possibility that development could extend beyond the city-owned land that has been the subject of negotiations.
Asked about the two parcels, Ben Porritt, Virgin Trains’ senior vice president for corporate affairs, said in an email, “I have nothing to offer you at this time on the properties.”

Viability questioned
One issue the City Council has barely addressed is Virgin Trains’ economic viability. Some residents fear the company could go out of business, and a consultant’s report to the city wasn’t reassuring.
Although ridership and revenue are increasing, both fall below projections, according to the report by Colliers International. A total of 2.1 million riders were projected in 2019, but Virgin Trains was on track to have only 934,000.
Virgin Trains is adding stations at PortMiami, Aventura and probably Boca Raton, which the company says will increase ridership by 2 million passengers once the stations are in operation.
In 2018, its first year of operations, Virgin Trains lost $117 million on $10 million in total revenue. The company is expected to earn $20.4 million in 2019, or only 26% of its revenue projection, the report says.
Mayotte, who requested the financial data, asked if Virgin Trains has adequate funding to build and operate a Boca Raton station.
A company official told her that Virgin Trains closed on $1.75 billion in private activity bonds in April. In a news release, the company said that with the closing, it has enough money to lay rail tracks from West Palm Beach to Orlando. The construction is expected to be completed in 2022.
The draft agreement between the city and the rail company states that the city may terminate the lease for the station and parking garage land if Virgin Trains discontinues service or if service diminishes substantially.

Land request set aside
When Virgin Trains informed city officials in July that it wanted to build a station in the downtown, it asked for the donation of about 4 acres east and south of the library.
Virgin Trains would develop those portions of the land not used for a station and garage. Company officials offered no concrete plans, but said it could include high-rise residential, retail, office and hotel.
Since then, Virgin Trains has backed off the land donation request. In September, it asked for an option to buy a portion of the land at fair market value for a transit-oriented development.
But that idea complicated efforts to reach a quick agreement with the city. So Virgin Trains said it would put aside development plans for now.
Most recently, Virgin Trains is seeking a right of first refusal if the city decides to sell the property that the company eventually wants to develop after Dec. 31, 2024. The city would not sell it before then.
While the rail company would lease the land it wants for the station and parking garage for $1 a year, the city considers it a land sale because of the length of the lease. The initial lease term is 29 years, but with renewals could total 89 years.
City code requires any sale or lease of city property be done at fair market value. There is an exception, however, for the sale or lease of property that would be of “significant economic benefit” to the city.
Virgin Trains has provided an economic impact study that says the station would contribute $15.5 million annually in economic benefits, including $10.9 million in money spent by visitors using Virgin Trains to come to Boca Raton.
Virgin Trains has agreed to spend as much as $300,000 to relocate the Junior League of Boca Raton’s Community Garden, which will be displaced by the station.
City officials think they have found the perfect spot for it in the southeast area of Meadows Park at 1300 NW Eighth St. While it is not in the downtown, council members were told that the Junior League likes the location because it has ample parking, room for expansion and is pesticide-free.
Virgin Trains had asked the city to fund an elevated pedestrian bridge over Dixie Highway so that people can walk from the station across the busy roadway into the downtown. The company has since said it would help the city get grants to finance the bridge.