A Boca Raton police officer who fired his gun at a fleeing car and then chased it along State Road A1A from Camino Real into Broward County at speeds of up 109 miles per hour has lost his job.
Officer James Clark was fired following an extensive internal affairs investigation that concluded the officer used excessive force and violated more than a half-dozen other department policies during an October traffic stop involving a reportedly stolen Honda Accord.
According to an internal affairs report, Clark pulled the Honda over on Camino Real near Federal Highway shortly before 9 p.m. on Oct. 16. With his gun drawn, recorded on dashboard camera footage, Clark approached the vehicle and attempted to open the passenger door. As he did, the driver — later identified as 27-year-old Mark Simmons — drove away.
Clark, in foot pursuit, fired one shot at the vehicle with the bullet passing through the back of the driver’s headrest, according to the report.
The officer then returned to his vehicle and began a high-speed chase down State Road A1A and into Deerfield Beach, where Clark lost sight of the Honda.
The car was later found abandoned in Deerfield. Simmons was arrested several days later and eventually pleaded guilty to fleeing an officer. He was sentenced to the 98 days he had spent in jail while the charges were pending.
The internal affairs report, submitted by Capt. Matthew Duggan, concluded that Clark violated as many as nine department policies, was not justified in firing into the fleeing vehicle or continuing a chase of the Honda.
“Based on a preponderance of evidence, the allegation that Officer James Clark failed to terminate the pursuit when the risk to himself and others outweighed the suspect’s danger to the community is sustained,” Duggan wrote in the report.
No charges were filed against the police officer and attorneys representing him are reportedly planning to appeal the termination. 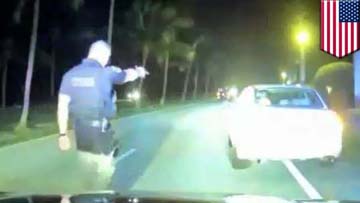 Watch the dash-cam video at www.thecoastalstar.ning.com.