Just months after celebrating its 50th anniversary, Boca Raton Regional Hospital is celebrating the largest philanthropic gift the health care facility has received in one day of giving.

The $35 million in gifts is a combination of donations from three benefactors who have supported the hospital for many years: Stanley and Marilyn Barry donated $10 million; Christine E. Lynn $15 million, and Richard and Barbara Schmidt and the Schmidt Family Foundation gave $10 million. 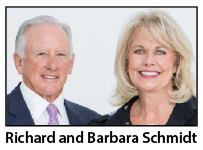 The gifts will provide the seed money for the hospital’s $260 million capital project, which will include a 278,000-square-foot addition with a seven-story patient tower, an expanded and renovated surgical suite, enhanced and expanded surgical and medical intensive care units, a cardiovascular intensive care and step-down unit, expanded private rooms, a remodeled patient lobby and a new parking garage.

“These donors are among our most cherished community partners and intimate members of the Boca Raton Regional family, who lead through their commitment of time and expertise as well as philanthropy,” said Jerry Fedele, president and CEO of the hospital. “They set the pace for others to ensure outstanding, best-in-class health care in Boca Raton. We owe them a huge debt of gratitude.”

Fedele thinks the hospital’s close connection to its community and residents is why such generosity comes from local people.

“Because we are so community-oriented, the philanthropy comes primarily from the Boca Raton community,” Fedele said in an interview last year. “I’ve been in health care more than 30 years and I have never seen a feeling of community ownership anywhere in the country like we have here.”

The $35 million in gifts was announced in January during a reception at the Christine E. Lynn Women’s Health & Wellness Institute.

Mark Larkin, president of the hospital’s fundraising foundation, said the generous gifts will enable the hospital to grow as needed to serve a booming patient population.

“We have been growing considerably and so we are ready to take the next step and have our facilities catch up to the number of people we care for,” Larkin said. “We have seen a marked growth in the quality and the number of programs we offer. We started now a full academic teaching facility and so all of those things have led to more and more people coming and turning to us for care.”

U.S. News & World Report named the hospital the top-ranked medical facility in Palm Beach County for 2016-2017, and Becker’s Hospital Review called it one of “150 top places to work in health care” in 2017.