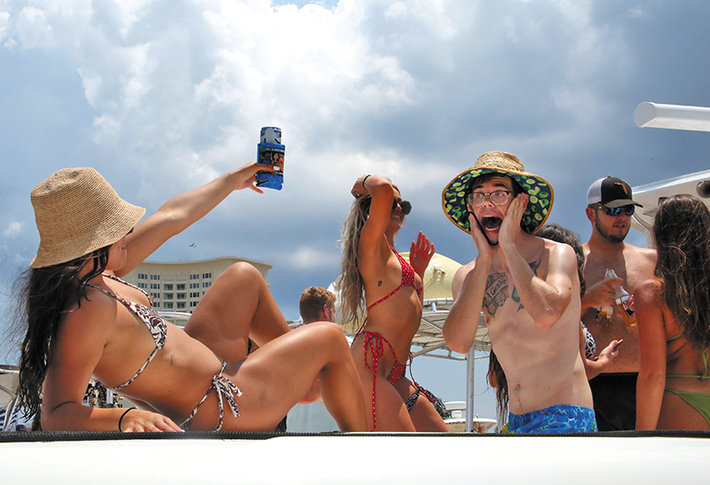 Plenty of beer, a lack of fabric and a sunny day brought out a variety of reactions. Tim Stepien/The Coastal Star

After a one-year, pandemic-imposed hiatus, the massive wet and wild party flotilla known as Boca Bash hit the water again on April 25, leaving a wake of controversy and concerns.
Thousands of vessels of all sizes — from yachts, cigarette boats and skiffs to pontoons, paddleboards and inflatable flamingos — crammed into Lake Boca Raton for the traditional daylong alcohol-fueled scrum.
“After dealing with COVID for a year, everybody wants to go crazy,’’ Racquel Scott of Boca Raton said as she waded in waist-deep water through a gauntlet of anchored vessels.
Though the pandemic is far from over, no one wore a protective mask. And social distancing was practiced in reverse, with revelers crammed together in the shallows and along bows and sterns of boats, many of which were tied up side-by-side at anchor.
Some revelers said they’d been vaccinated. Others said they weren’t worried, an attitude that sparked concerns among city officials of a Boca Bash superspreader event.
City Council member Monica Mayotte lamented that the city has no control over the event on state waters and that taxpayers foot the bill for the large law enforcement and fire-rescue presence at the event.
“I feel the partygoers have no accountability or responsibility,” she said at the April 27 council meeting. “They are partying and doing dumb things and the first responders are there to make sure they don’t harm themselves. ...
“I just need to get out there I wish we had some control.”
Lake Boca, which connects the Boca Raton Inlet with the Intracoastal Waterway, is under state jurisdiction. On the Sunday of Boca Bash, it was patrolled by city police boats as well as the Florida Fish and Wildlife Conservation Commission and Coast Guard.
At least 12 people were arrested. The FWC made 10 arrests for boating under the influence and one for disorderly intoxication. Boca Raton police arrested one person for resisting arrest without violence.
Controversy has followed Boca Bash since its modest inception as a birthday party in 2007. Every year it has grown organically, attracting more overzealous merrymakers.
In 2018, a 32-year-old man drowned while trying to swim out to dozens of boats tied together in the middle of the lake. That prompted authorities to crack down the following year, when the FWC made 14 arrests — more than double the previous year’s total — including 12 for boating under the influence.
Lake Boca is ringed by homes, condos and hotels, including the Boca Raton Resort and Club. And it’s impossible not to hear the collective Boca Bash roar, especially music blaring from multiple boat speakers.
“I wouldn’t say people who live by it are a fan of it, but I don’t get major complaints to stop it,’’ Deputy Mayor Andrea O’Rourke said. “I live in that location myself and there’s an aspect of fascination, I think.’’
Some regulars said they’re not trying to make waves with anyone. The arrests and incidents are not representative of the many people who party responsibly, they said.
Nick Probo of Lighthouse Point rented a pleasure boat with more than a dozen friends, whom he pointed out.
“A lot of these guys work at Pratt Whitney. My brother is a cop in Charleston. There are doctors here. It’s not all irresponsible kids,’’ he said.
Parents could be seen towing their children on floaties. Twentysomethings tossed footballs. One woman did yoga on a paddleboard. Another blew soap bubbles not far from a group playing beer pong on red Solo cups arranged on rafts.
“It’s a well-organized mess,’’ Rich Rose said as he waded in the water. “It’s not a bunch of drunks. I mean, look at some of these boats. You’ve got to have money to come out here.’’
But the scenery at times was too saucy for a PG rating.
Many bikinis were teeny-weeny and a few female partiers were seen topless. In some parts of the lake, the odor of marijuana intermingled with boat exhaust.
A blow-up doll and an inflatable shaped like a part of the male anatomy were attached to the flagpole of one boat. Some boats flew “Trump” flags. Other flags had a four-letter word in front of “Biden.”
A posse of water scooter riders wore creepy clown masks. Some revelers did back flips off the upper levels of vessels and others leaped from one bow to another.
Jay Sanders offered a more conventional recreation activity: His double-deck Premier Pontoon, which he piloted from Miami, came with a water slide.
“I was invited to a party on a double-deck pontoon boat with a water slide. Why say no?’’ said Dan Carey.
The common complaint from revelers: stubbed toes from tripping over anchors wedged in sand.
“It’s a fun group of people,’’ said Joey Alexander, 21, of west Boca. “We are just living the South Florida dream.’’
Mary Hladky contributed to this story.