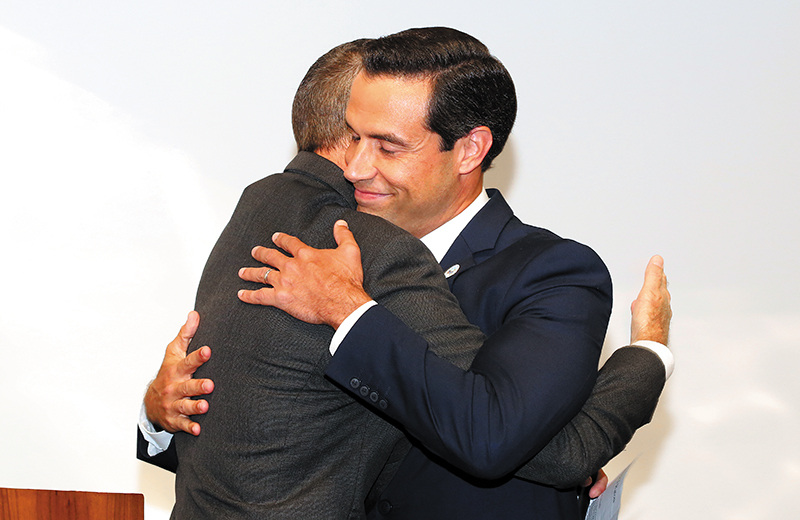 Thomson gets a congratulatory hug from Pastor Tommy Kiedis of Spanish River Church after he administered the oath of office to him during an organizational meeting. Tim Stepien/The Coastal Star

New City Council member Andy Thomson, who won his seat by a mere 32 votes out of 17,959 cast, immediately set about trying to repair any schisms in Boca Raton.
“The election showed us that there are divisions in the city, and I’m going to work with everybody up here, my new colleagues, to make sure that we try to bridge those divisions, that we help preserve our quality of life here, to help resolve the divisions we have and continue to make this city as wonderful as it has been,” he said after taking his place on the dais Sept. 12.

Mayor Scott Singer, who won his race with nearly 11,900 votes to Al Zucaro’s 6,278 and Bernard Korn’s 579, also sought help to improve Boca Raton at the council’s post-election organizational meeting.
“Our successes outweigh our problems, our shared vision for our community is greater than our small disagreements, and most of all, our opportunities are far greater than our challenges,” Singer said. “I’m truly humbled to have a chance to work with my colleagues, our city staff and the people of Boca Raton not just to find common ground but higher ground.”
County Commissioner Steven Abrams, who swore in Singer, congratulated the new council member. Abrams, who served on the council for 17 years and is finishing his ninth year as a county commissioner, called Singer the hardest-working candidate he had ever seen.
“You did take office, take the reins at a very difficult time in the city’s history. You were able to reassure the public, to keep the city moving forward. I think that the residents appreciated that,” Abrams said.
Singer, a lawyer, was elevated from deputy mayor to the mayor’s seat in April after Susan Haynie was charged with official misconduct and perjury and suspended from office. He and Thomson, also a lawyer, will serve until March 2020 and then be able to run for two full three-year terms.
Thomson said he is “proud of the fact that we stayed positive. We showed that a positive campaign can be successful.”
Thomson said election rivals Kathy Cottrell and Tamara McKee “are both fantastic residents of our city, ran terrific campaigns, energetic campaigns.”
The final count had Thomson with 7,929 votes, Cottrell with 7,897 and McKee with 2,133.
The results were not known until an official recount four days after the Aug. 28 special election. A 19-vote difference, 0.1 percent, triggered the hand count of 1,518 undervotes, ballots without a choice, and overvotes, ballots with two or more candidates chosen.
State law requires a hand count when the difference is 0.25 percent or less.
On election night Cottrell held a lead over Thomson of more than 200 votes after early votes were counted and again when about two-thirds of the city’s precincts were tallied.
Her lead narrowed to 37 votes by 10 p.m. and became a tie two hours later. Mail-in and provisional ballots counted near midnight gave Thomson first a three-vote advantage, then 19.
At the organizational meeting Thomson especially thanked McKee for an episode during early voting at the Downtown Library. He and one of his young daughters were out shaking hands as lunchtime neared.
“Tamara’s family had just come back to their area with this big pepperoni pizza, and very quickly my daughter Allie [lost] interest in the voters out there, and began looking more and more longingly at that big pepperoni pizza. And despite me and Tamara battling out there for every vote, which we were, the McKee family was so kind to my daughter that they gave her not one but two slices of their pepperoni pizza.
“And that’s the kind of, I think, humanity that sometimes we don’t see in a campaign, but I think it’s a testament to the character of Tamara and her family and I wanted to tell her thank you.”